As border protests persist, Abbas steps up pressure on Gaza

Despite the ongoing protests on Gaza's borders, Palestinian President Mahmoud Abbas does not seem to be backing out on his demand for a full handover of the Gaza Strip to the Palestinian Authority. 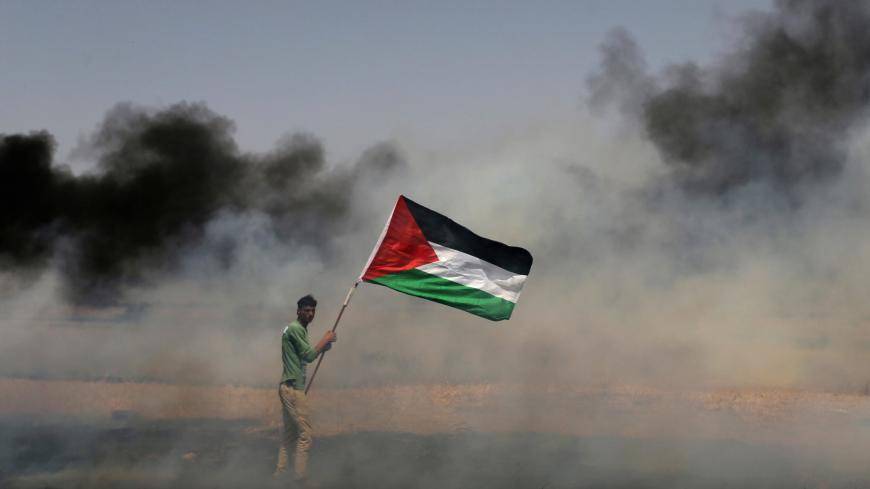 A demonstrator holds a Palestinian flag during clashes with Israeli troops at a protest where Palestinians demand the right to return to their homeland, at the Israel-Gaza border in the southern Gaza Strip, April 13, 2018. - REUTERS/Ibraheem Abu Mustafa

Palestinian President Mahmoud Abbas is moving to increase pressure on the Islamic Hamas movement, demanding the de facto power in Gaza hand over everything, including security personnel, offices and weapons, to the Ramallah-based legitimate government.

Azzam Ahmad, a member of Fatah's Central Committee and Abbas’ point man in the talks with Hamas, told Al-Monitor by phone that Hamas must make a clear choice: “Either they hand us everything at once, or they take responsibility for everything.”

Ahmad, who has been leading the reconciliation efforts with Hamas, denied a report published by Al Jazeera April 10 claiming that Abbas gave Hamas 60 days to make a decision or else he would declare Gaza “a rebellious zone.”

The Palestinian denial, which was also confirmed by two other members of the Central Committee, is focused on the number of days rather than on the fact itself.

Ahmad said that the call for a total handover was made during a meeting a week earlier with an Egyptian envoy. He said, “President Abbas informed the Egyptians of our position, and we are waiting to hear from them as to the Hamas response.” Abbas had met April 3 in Ramallah with Abbas Kamel, head of the Egyptian Intelligence Service.

Central Committee member Dallal Salameh told the Jeddah-based Arab News April 13 that the committee approved April 8 the need for decisive action in Gaza. “We agreed that Hamas needs to turn over all powers and not half powers to Prime Minister [Rami] Hamdallah’s government,” she said. “We are waiting for answers from Egyptian mediators as to our demand for full solutions and not partial ones.”

Payment of salaries to public servants, which was delayed in the first 10 days of April, was finally made — but only to West Bank government workers, thus increasing the financial pressures on people in the Gaza Strip.

Reuters reported from Gaza April 12 that “the failure to pay March’s salary round as scheduled on Tuesday prompted anger and suspicion in the economically stricken Gaza Strip.” According to Reuters, the Palestinian Authority (PA) Finance Ministry in Ramallah said that the payment delay in Gaza was due to “technical issues.”

But when the salaries were made to West Bank employees April 12, it became clear that Ramallah was using the salaries as a way to pressure the Hamas de facto power in Gaza.

Al-Hayat newspaper quoted undersecretary of the Hamas-controlled National Economic Ministry, Ayman Abed, on April 13 as saying that “the number of trucks entering Gaza has dramatically dropped from 700 trucks in 2016 down to 320 in 2017.” Abed also indicated that the number of bounced checks in Gaza has increased from $36 million in 2015 to $113 million in 2017.

Director of the Ramallah-based think tank Masart Hani Almasri told Al-Monitor that the punishment of Gazans by withholding salaries is wrong. “Torturing 2 million of your own people is not a solution but a tragedy,” Almasri said.

Arab News reported April 13 that a committee headed by Musa Abu Zeid, head of the General Personnel Council, has been established to study the potential cost of turning to early retirement of all nonworking government workers who were employed before the Hamas takeover.

These nonworking employees, reportedly numbering 58,000, who have continued to receive salaries had been asked not to work with the Hamas government 11 years ago when the Hamas takeover took place. Those among them who have yet to reach retirement age returned to their jobs last October when Hamas appeared willing to turn over the reins of government to the Hamdallah government.

But the process was not complete, and the incomplete takeover appears to have ended when a convoy carrying Hamdallah and head of the Palestinian Intelligence Majid Faraj was the target of an explosive device shortly after their convoy entered Gaza March 13.

The current escalation by Abbas comes amid the highly publicized weekly public protests in Gaza, which are expected to climax on May 15, marking the 70th anniversary of the Palestinian Nakba. It also comes just before the upcoming Arab Summit on April 15, which will be dominated by the Palestine issue. On top of this is a regular meeting of the important Palestine National Council, scheduled for April 30, 22 years since the last general meeting of the Palestinian National Council.

Sources in Gaza told Al-Monitor that Hamas is hoping to convince the PLO to temporarily suspend the punitive measures and take part in the anti-Israel peaceful protests, which both sides are on the record as supporting.

To prove their seriousness about the peaceful nature of the protests, head of the Hamas political bureau Ismail Haniyeh argued in a speech April 9 in Gaza about the importance of keeping the public protests peaceful despite the fact that Hamas controls an arsenal of homemade rockets.

The deteriorating humanitarian situation due to the Israeli siege and the limited civilian passage with Gaza will reach unprecedented and catastrophic levels with the current escalation by the Ramallah leadership, which seems to be hoping for a quick and total capitulation by the de facto power in Gaza. Abbas is clearly taking a risk with the latest decision. But if Hamas doesn’t surrender, there is real worry that the current peaceful protests on the borders with Israel might turn ugly and violent and that other violence might take place in the West Bank. One thing is clear: The current situation in Gaza can’t continue for much longer at this negative escalating rate.