Visitors flock to visit Adam's Tree, which they believe was planted by the Prophet Abraham and is sacred, in southern Iraq. 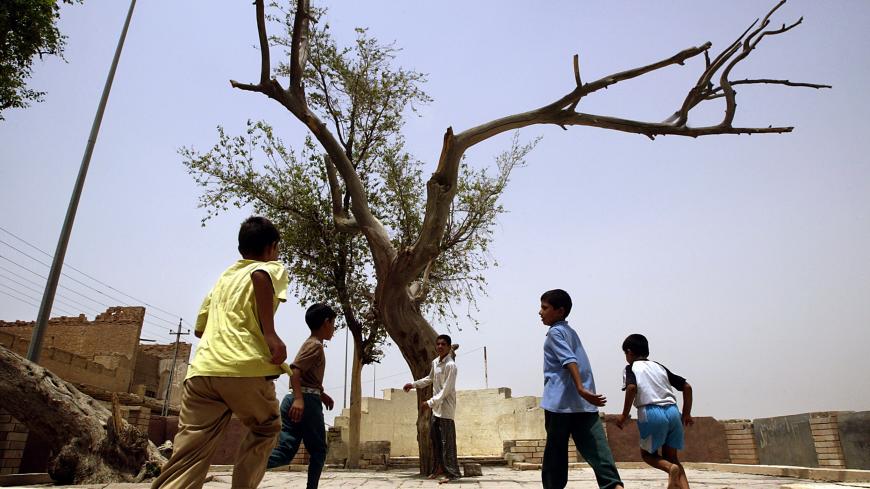 Iraqi children gather around what is believed to be Adam's tree in the Garden of Eden, Qurna, Iraq, May 19, 2003. - REUTERS/Damir Sagolj

A convoy from Babil province traveled nearly 250 miles in early April to visit Adam’s Holy Tree, also known as the “Tree of Knowledge.” For the thousands of Muslims who come each year, praying at the tree brings blessings, forgiveness and realization of their dreams. It also draws Christian tourists who believe it is the tree Eve ate from in the Garden of Eden.

Local cleric Abdul Hussein al-Hashimi told Al-Monitor that visiting the tree in Qurna, a town in southern Iraq just northwest of Basra, is a religious duty, part of the country’s historical and religious heritage that had been preserved through the generations.

Um Abbas, 70, was among the visitors. “I'm visiting the tree for blessings and forgiveness,” she told Al-Monitor. “I also come here to pray for health.”

The Tree of Knowledge used to stand alone in Qurna, located at the delta between the Euphrates and Tigris rivers, allegedly where the Garden of Eden was located. In 2005, the Ministry of Water Resources spent 6 million Iraqi dinars (about $5,000) to build a park around the tree with tables and umbrellas as well as a pier on the bank of the Tigris.

A large billboard there reads in Arabic and English, “This spot was blessed by the visit of the Prophet Ibrahim 2,000 years ago,” explaining that Ibrahim prayed in that very spot and said that a tree similar to Adam’s Tree in Eden would one day grow there.

The site has also interested Westerners with an interest in Mesopotamian culture. Norwegian scientist and adventurer Thor Heyerdahl visited the location 40 years ago in a simple boat he built out of balsa wood to prove to the world his theory that early man could navigate the oceans.

On March 16, an international tour group from France, the UK, Germany and the United States included the tree in its tour of Mesopotamian civilizations.

Um Mohammad, another visitor, said in a video that the atmosphere of the place gives her happiness and serenity, “just like visiting any of the shrines across the country.”

Abu Ali, who volunteers to help keep up the place, told Al-Monitor, “The tree is blessed. People come here and pray and recite the Quran by the tree. People report that the tree's energy helps with mental and social problems.”

People also hang colorful cloths on the tree’s branches. “People throw them up to thank Allah for granting their requests and curing their illnesses,” Abu Ali explained.

The tree’s trunk bears writing in Latin and Arabic as well as names that visitors have carved over the years to commemorate their pilgrimage and to ask for blessings.

Ibrahim Khalil al-Allaf, a professor of modern history at the University of Mosul, told Al-Monitor, “The actual age of the tree has not been scientifically determined, but it goes back hundreds of years.”

“Adam’s Tree is a holy site for Iraqis. Travelers and tourists visit it and have written about it in books,” Allaf said. “This dry tree looks like it has no life in it, but it has been standing firmly for generations. This gives people hope in life, for sustainability and connections between generations. People feel assured and comforted when they find a safe haven in sacred things.”

Christians also recite prayers by the tree. Fawzi Behnam, a Christian pilgrim, told Al-Monitor, “Christians believe that this place is the Garden of Eden from the Old Testament.”

Cleric Abdul Hussein al-Khaffaji told Al-Monitor that there were "accounts that suggest that Ibrahim or Abraham, recognized by Muslims, Christians and Mandaeans as a prophet, planted this tree where the two rivers crossed to mark Mesopotamia, the area between two rivers.”

The Iraqi Ministry of Water Resources rehabilitated the two rivers' convergence point in 2017 to improve the tourism potential of the area. However, a spokesman for the ministry told Al-Monitor on the phone that there are currently no plans to rehabilitate the location and launch large-scale tourism projects there. Junaid Amer Hameed, a writer and archaeological researcher for the Iraqi National Museum, told Al-Monitor that the site should remain as close to its original state as possible, rather than building new touristic facilities.

Yet Mohammad al-Malki, the head of the municipal council in Qurna, has high hopes. He told Al-Monitor, “Hopefully, the park around the tree will be further developed and turned into a well-designed religious and touristic site that will generate revenue for the town and of course the project itself. It will be a new recreational place for Iraqis in addition to a source of healing.”