Egypt plans to restore and renovate the shrines and tombs of the Prophet Muhammad’s family and surrounding roads and squares in a move expected to support religious tourism. 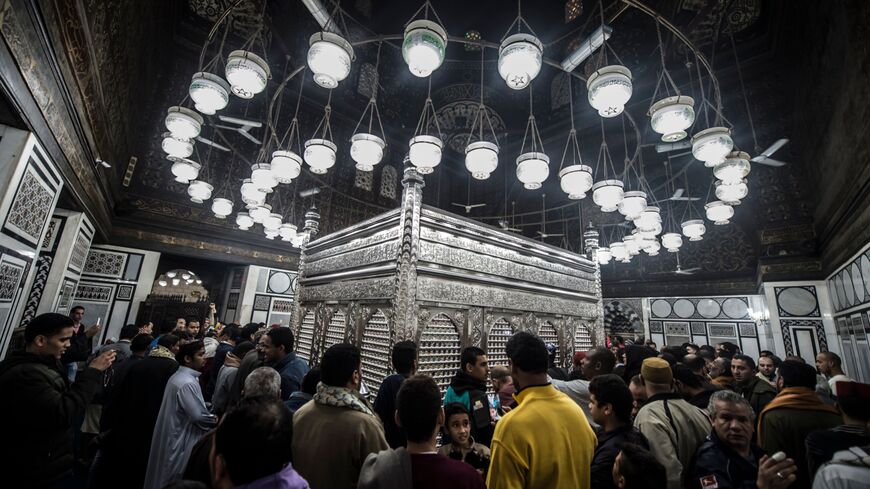 Egyptian Muslims visit the shrine of Hussein ibn Ali, the Prophet Muhammad's grandson, at the Al-Hussein Mosque in Cairo during celebrations of Muhammad's birthday, on Dec. 1, 2017. - KHALED DESOUKI/AFP via Getty Images

CAIRO — Egyptian President Abdel Fattah al-Sisi has instructed the relevant authorities to restore and renovate the shrines of Ahl al-Bayt (the family of the Prophet Muhammad) across the country, particularly the tombs of Sayyida Nafisa, Sayyida Zeinab and Sayyid al-Hussein.

A July 24 presidential press statement  said Sisi met with the head of the Armed Forces Engineering Authority, Maj. Gen. Ihab al-Far, and directed him to renovate the interior halls of mosques and their rich and elegant architectural decorations, in line with the historical and spiritual nature of shrines, and to develop the roads and squares leading to the sites as well as the surrounding facilities.

Shrines, which are sometimes built next to mosques, occupy an important place in Egyptian society and are a destination for those who want to pray, as Muslims consider them a source of blessings, reassurance and inner peace.

The head of the Al-Ashraf Syndicate (Al-Ashraf are those who belong to the lineage of Muhammad), Mahmoud al-Sharif, told Al-Monitor, “Developing the roads, squares and facilities surrounding the Ahl al-Bayt mosques will make them more attractive to visitors and easier to reach, thus allowing visitors from all over the world to access these shrines once again.”

He said, “The mosques of Ahl al-Bayt have a special place in the hearts of many who come to visit them from all over the world and on every occasion, to praise the importance of these mosques and their archaeological and historical value, in addition to recognizing their moral value because they are affiliated to members of Ahl al-Bayt.”

Sharif said, “Egypt is filled with such sites, with shrines affiliated to names that have had a positive impact in spreading the moderate Islamic call. Egypt also had schools that graduated many generations bearing the banner of the tolerance and mercy of Islam.”

Meanwhile, Abdel Hadi al-Qasabi, the president of the Supreme Council of Sufi Orders, said in a July 26 interview on Mehwar TV, “The interest in Ahl al-Bayt shrines is a revival of the values of love, sincerity, tolerance and acceptance of others, which is what we need at this time to preserve the successes of the Egyptian state in all fields during the recent period.”

Qasabi added, “The decision to renovate shrines and mausoleums brought joy to Egyptian society, and this development would make Egypt a major tourist destination" and bring money into the country.

Sayyida Nafisa was a great-granddaughter of Muhammad and was a scholar and teacher of Islam who lived in Cairo later in her life. Sayyida Zeinab was Muhammad's granddaughter and is believed to have accompanied her brother Hussein to Karbala, where he was killed in 680. The Sayyida Zeinab Mosque in Cairo is said to have been built over her remains, although Shiites believe she is buried at a shrine near Damascus, Syria. Hussein was beheaded, and it is said that in 1153, his head was taken to Cairo, where a mausoleum was built to house it.

Abdel Rahim Rihan, director general of research, archaeological studies and scientific publishing in South Sinai at the Tourism Ministry, told Al-Monitor, “The political leadership’s sponsorship of shrines and [Sisi’s] directives to restore and renovate them, as well as the roads leading to them, boost these shrines’ value and contribute to revitalizing religious tourism in Egypt.”

He said, “The state's interest in developing these attractions and facilitating access to them will make Egypt a destination for religious tourism for Muslim and Christian pilgrims alike from all over the world.”

Rihan said, “Restoring shrines helps to complete the religious tourism system, which also includes the Holy Family Trail that blesses the land of Egypt from Rafah in Sinai to the Muharraq Monastery in Assiut governorate.”

He pointed out that the two routes can be linked into one path to include visits to the holy family’s sites in Cairo, such as the Tree of the Virgin Mary in al-Matariyyah, the Maadi Church, the churches of ancient Egypt and the shrines of Ahl al-Bayt.

Rihan said, “The most famous shrines in Egypt [of Muhammad's descendants] are located on al-Ashraf Street or what is known as Ahl al-Bayt Road in central Cairo. This street includes the tombs of Zain al-Abidin, Sayyida Nafisa, Sakinah bint Husayn, Sayyida Zeinab, Ibn Sirin and Ruqayah bint Ali, in addition to other shrines in different locations, such as the tomb of Fatma al-Nabawiyya in the al-Darb al-Ahmar district.”

Noura Ali, the head of the parliament’s Tourism and Civil Aviation Committee, told Al-Monitor, “The decision to restore and renovate shrines is very wise, given the religious significance and the special place these sites have in the hearts of the Egyptian people.”

Ali said, “Some of these sites have archaeological value, and they thus combine the ancient history and spirituality of religious places. These renovations will not only boost domestic tourism, but will support foreign religious tourism coming from countries such as Pakistan and Malaysia, and especially people from the Bohra sect from India and Iraq.”