The Israeli army estimates that Hamas plans to continue with the protests along the Gaza border long after their original deadline of Nakba Day, on May 15. 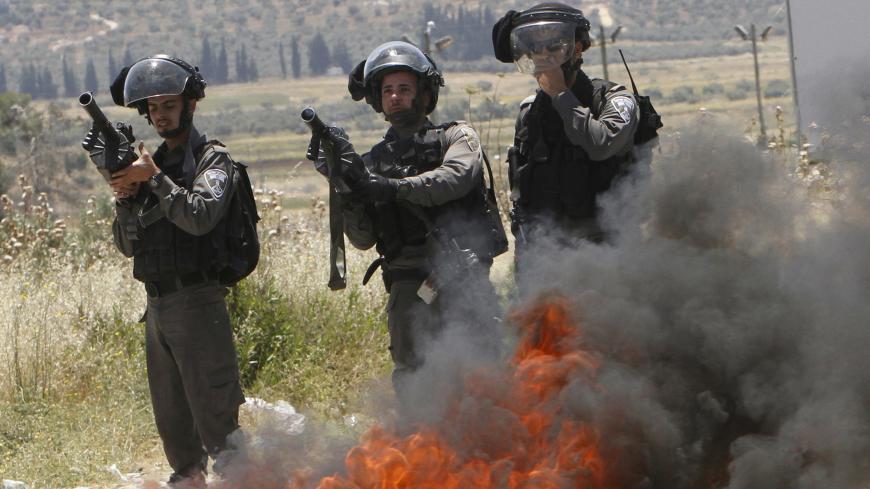 Israel's security apparatus has decided that if the mass protests along the Gaza border and the Hamas-inspired violence continue to escalate, the Israel Defense Forces' (IDF) response will not remain limited to the area close to the border. In other words, the IDF will not only address the threats to breach the border, but will attack Hamas targets as well.

The intensive riots near the border and Hamas' intention of continuing them has returned the "target bank" term to the IDF lexicon, which includes Hamas' training camps, control positions, police stations, ammunition and rocket-production plants, and storage facilities for military equipment including rockets.

The decision to reinstate the target bank was made in mid-April based on the assumption that Hamas intends to wage an extended war of attrition along the border. Despite the protest organizers noting specific dates for the "Great Return March" — from Land Day, on March 30, to Nakba Day, on May 15 — the Israeli assessment is that Hamas intends to prolong the border protests to create an ongoing cycle of violence, even after Nakba Day and its planned culmination during the transfer of the US Embassy to Jerusalem.

The border protests are a success as far as Hamas is concerned, despite the many victims involved. The siege on Gaza and the tribulations of the Gaza Strip have been returned to the global agenda, although the recent developments in Syria have shifted international attention away from Gaza. Hamas has succeeded in creating a show of unarmed demonstrators protesting their distress, while the Israeli army indiscriminately uses live ammunition.

An Israeli security source told Al-Monitor that Hamas has two objectives that will encourage it to continue the violent protests at the border. One is to force the IDF to station a large, permanent constellation of forces along the Gaza border; the second is to continue to engage international public opinion in the blockade issue in order to pressure Israel to remove it.

Hamas would like to turn the mass border protests into a weekly routine, beyond May 15. But the IDF plans to stop the protests by changing its tactics on the ground and target Hamas in particular. From the start, Israel has categorized the border protests as acts of terror, and it claims that Hamas is not only involved in the protests but also engages in terrorist activities such as planting explosive devices along the border fence and attempting to break through it. Israel's conclusion is that it must respond militarily to what it perceives as Hamas' armed confrontation along the border.

Two days after the April 14 protests, the IDF announced it had recently uncovered another Hamas tunnel in northern Gaza. According to Defense Minister Avigdor Liberman, this is the longest, deepest and most impressive tunnel to be uncovered so far. An IDF spokesperson said on condition of anonymity that the tunnel was situated in the Jabaliya area, close to where the protests are taking place. Thus, the IDF prepared for the possibility that Hamas might use the tunnel to carry out terror acts under the cover of the demonstrations.

The timing of the announcement and the connection made between the uncovered tunnel and the protests were designed to send a clear message to Hamas: Be careful or you will pay a price for the continued protests. The longer the demonstrations continue, the more Hamas invests efforts in them and in the violence against IDF forces, which in turn will result in Israel ratcheting up its military responses to include Hamas targets in Gaza. "This is a [military] conflict whichever way you look at it and should be treated as such," said the military source. "The equation is clear: The IDF will be free to respond [in the entire Gaza Strip] for every terror act that Hamas is responsible for along the border."

Beyond the military reprisal option, Israel also has tools to impose sanctions on Hamas. As of now, the border crossings are operating as usual; even the Kerem Shalom crossing, which is used for goods and merchandise, has been functioning as usual in recent weeks, even though fewer trucks enter Gaza because of the reduced purchasing power of its residents. However, the message recently transmitted by the Israeli civil administration to Hamas is that they cannot continue to separate the ongoing border incidents from the future functioning of the border crossings between Israel and Gaza.

The protest organizers are planning to stage "a performance" this coming weekend that they hope will harm Israeli morale: They want to show two coffins with the names of the two IDF soldiers — Hadar Goldin and Oron Shaul — who died in the 2014 Israel-Gaza conflict and whose remains are still held by Hamas. The protesters also plan to show photos of Avera Mengistu and Hisham al-Sayed, the two Israeli civilians held by Hamas.

Coordinator of Government Activities in the Territories Maj. Gen. Yoav Mordechai addressed the planned provocation on COGAT's Arabic-language Facebook page: "The slain must be brought to burial, this must not be delayed. So said Moses, so instructed Mohammad. … Therefore our slain people must be brought to burial, and the slain Palestinian bodies in our hands as well. As long as you do not do this, Gaza will not prosper and flourish!"

Will Hamas understand the message? Will the border protests continue even after Israel's Independence Day and Nakba Day? It is hard to believe that Hamas will stop the protests that succeeded in shifting the rage of Gaza residents from Hamas itself to Israel. Thus, besides its tunnels, which are gradually being uncovered and destroyed, the movement thinks it has another tool to break the blockade.