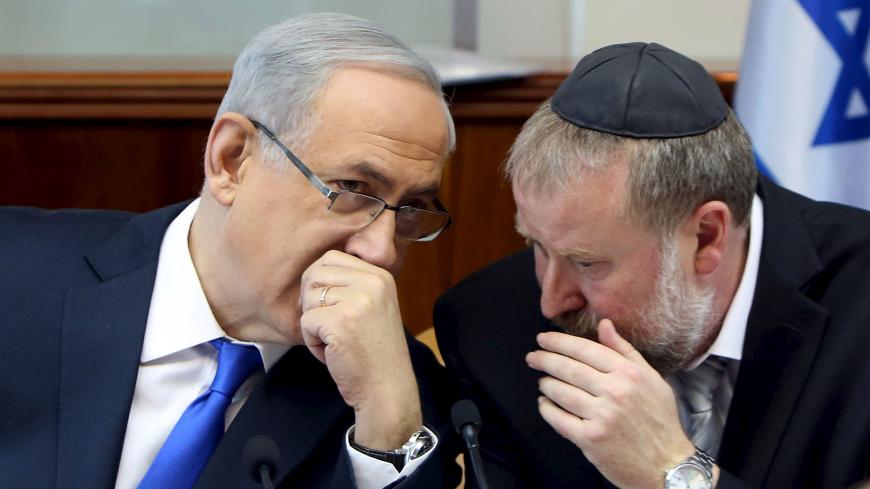 Unless pro-democracy forces wake up soon, they will find themselves having to add another sad day to the calendar week between Israel’s two national remembrance days — for the country’s fallen and for victims of the Holocaust. It will be known as Democracy Remembrance Day. On the days leading up to Israel’s 70th Independence Day (April 19), the government tried to take yet another big step toward ending the independence of its judiciary.

On April 15, one man, Attorney General Avichai Mandelblit, blocked a government-proposed law limiting the powers of the Supreme Court. In fact, this bill would enable the government (by a special Knesset majority) to ignore High Court rulings against laws it considers unconstitutional. For Mandelblit, this government measure represents a similar threat to the one he described in 2016 as “the end of democracy.” In September 2016, Mandelblit took a stand against the government’s proposed Regularization Law approving the expropriation of Palestinian lands in the West Bank for use by Jewish settlers. He warned at the time that the proposed bill would deal a blow to the constitutional defense of human dignity and liberty anchored in the Basic Law: Human Dignity and Liberty, and he subsequently refused to defend it against petitions to the Supreme Court challenging its legality. His current objections to the proposed government legislation known as the “Override Clause” foiled an attempt by the right-wing government to jail African asylum seekers and infiltrators.

Even Prime Minister Benjamin Netanyahu, who has no qualms about bad-mouthing close associates who he has deemed to have strayed from the straight and narrow (meaning, from his continued hold on power), would be hard-pressed to accuse Mandelblit of left-wing liberalism. Netanyahu was the one who appointed him previously to the position of Cabinet secretary and then promoted him to attorney general. Moreover, Mandelblit’s predecessor in office, Yehuda Weinstein, also a Netanyahu appointee, openly challenged the Override Clause when it first came up for consideration in 2014. Weinstein refused to cooperate with legislation that threatened, as he put it, to lift the restraints placed by the Basic Law: Human Dignity and Liberty on the power of the majority in a democratic nation to harm its minorities. A special announcement issued by his office in reaction to initiatives limiting the Supreme Court’s authority said an independent Supreme Court is vital for the sustainability and resilience of the State of Israel as a democracy, promotes positive values and human rights, and contributes to Israel’s international image as an enlightened and progressive state.

Michael Ben-Yair, who served as attorney general in the 1990s in late Prime Minister Yitzhak Rabin’s government, also believes the clause overruling Supreme Court decisions would constitute an end to democracy in Israel. In an interview with Al-Monitor this week, Ben-Yair said efficient oversight by the judicial branch of government constitutes the lifeblood of the democratic system. He argued that majority rule based on the democratic values — defense of minority, human, personal, civil and group rights — enshrined in the country’s basic laws does not fear judicial oversight. On the other hand, the former attorney general went on to say, “Majority rule not based on democratic values uses its parliamentary power to execute undemocratic moves and becomes a tyranny by majority rather than majority rule. To do so, it seeks to weaken the judicial branch and castrate its judicial oversight by a broad override clause.”

In response to Al-Monitor’s question, Ben-Yair said he would have refused to defend the government against a legal challenge to the Override Clause in the Supreme Court, and he would not even have authorized the hiring of outside counsel to defend its position. He is convinced that the government would have eventually “retreated from such a battle.”

Two former justice ministers, Daniel Friedman and Yaakov Ne’eman, had suggested including an override clause in the long-standing proposed Basic Law about legislation procedures. The proposed clause would have limited the court’s power to overturn laws passed by the legislature. The version currently under government consideration would make do with a regular 61-vote approval (an absolute majority of 61 out of 120 Knesset seats) to overturn High Court rulings. This means that even a narrow 61-member ruling coalition could paralyze the broadest majority of the Supreme Court.

The government may not even need an override clause soon in order to do away with the judiciary. Even as it seeks to castrate the Supreme Court, Justice Minister Ayelet Shaked is busy trying to re-create the top court in the image and likeness of her conservative HaBayit HaYehudi party. With the help of Knesset members on the political right and the Israel Bar Association (members of the Judicial Selection Committee), Shaked has succeeded in twisting the arms of two chief justices on that committee, incumbent Esther Hayut and her predecessor Miriam Naor. Thus, she managed to increase the number of conservative justices from the national-religious camp on the bench. The top court’s current makeup may not even have the majority votes needed to strike down proposed legislation such as the Regularization Law.

The new judges, like the minister who sought their appointment, are seeking to limit the standing of organizations petitioning against a law or a public institution — even if they are not directly affected and are representing a victim or group of victims claiming adverse effects. In other words, human rights organizations may soon be banned from standing beside those who need them the most — members of disenfranchised populations or people fighting against the injustice of the Israeli occupation in its various forms. The new justices appointed to the bench may now grant a green light to the government’s plans to deport asylum seekers to war zones (third countries) or hold them indefinitely in detention facilities.

Less than four years ago, three of the nine justices deliberating in the appeal of asylum seekers against their incarceration did not deem it appropriate to overrule a procedure allowing authorities to summarily jail anyone entering Israel illegally for one year without trial. One cannot expect a handful of judges and one state official, senior as he may be, to personally defend the basic right to human dignity and liberty and the rule of law. Public Security Minister Gilad Erdan was right when he said on April 15 that the issue of imposing limits on the Supreme Court’s authority justifies calling early elections. Prime Minister Netanyahu, suspected of criminal wrongdoing, argues that governments are only changed at the ballot box. That, then, is also the place to change a government that declares war on the rule of law.