Assad's forces expected to move on to Idlib

The Syrian regime appears ready to target militants in Idlib, but the area is also filled with civilians who have fled there to escape the violence in so many other parts of the country. 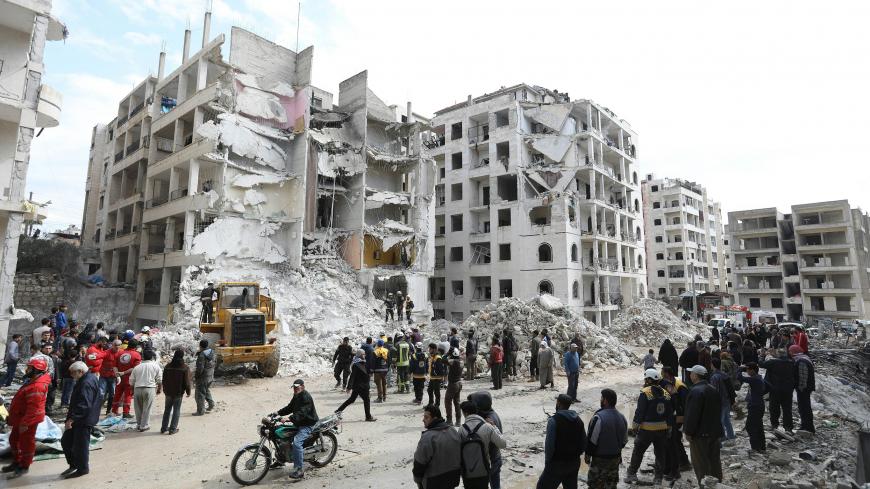 Now that the Syrian regime and its allies have won control of eastern Ghouta and much of Douma, it looks like Idlib is next in the line of fire.

President Bashar al-Assad, with the support of the Russian air force and Iranian and Hezbollah military support on the ground, has made significant advances against the opposition. Observers believe those forces' intermittent bombardment of Idlib province, which has killed and wounded many, could warn of a pending all-out attack.

Thousands of civilians and militants fleeing other areas have sought refuge in Idlib, and the United Nations has fears of a humanitarian disaster there on the scale of Aleppo. The UN estimates 2.5 million Syrians live in Idlib, and a March 23 UNICEF update estimates 1 million of them are children.

Those countries previously agreed to declare Idlib a de-escalation zone between the regime and the opposition, as per the many 2017 peace talks in Astana, Kazakhstan. These three major stakeholders are considered the guarantors of the peace process.

According to non-official statements on social media by the central channel of Russian-controlled Khmeimim air base, Idlib locals would be wise to expel Hayat Tahrir al-Sham elements or bear the consequences, which is likely to be a direct military attack.

Since the de-escalation zone was announced for Idlib, Turkey has deployed eight monitoring posts along the province's administrative border and is now setting up other posts in the opposition-controlled Turkmen Mountain area in northern Latakia.

The relationship between Turkey and Russia regarding Syria is based on ensuring the interests of both parties. Both have declared their willingness to preserve Syria’s unity and territorial integrity.

Basel al-Haj Jasem, a researcher on Russian-Turkish affairs, told Al-Monitor, “Today, Russia needs Turkey more than ever to keep a lid on many Syrian areas to ward off the chaos of arms, in preparation for any future political settlement. This is especially true in light of the Western political and economic attack on Moscow. Additionally, Turkey’s military presence in Syria is the only guarantee to balance out the Iranian presence."

He added, “So far, it is clear that Turkey has Russia’s support in setting up monitoring posts in Idlib. But as long as there is any faction [there] classified on international terrorism lists, the area will remain the target of more than one party — whether the parties to the Astana talks; the United States, which has been supporting the YPG [the People's Protection Units] inside Syria; France, which wants to get involved; as well as the Arab forces [inside Syria]. Therefore, any military action on the part of any of the Astana-talks parties is likely to be carried out in coordination with the other parties."

He noted that Russia and Turkey both need peace in the region. "This is a major common point between the two. Moscow is well aware that there are some regional and international parties that want to see the Russian military intervention in Syria turn incrementally into a quagmire and that the continuation of the war means more losses in the ranks of Russian soldiers, the spread of terrorism and separatism in the region.”

France has warned that any military venture in Idlib province could result in a catastrophe there. French Foreign Minister Jean-Yves Le Drian on April 15 proposed for Syria “self-determination through a political process involving the disarmament of militias.”

If the tug of war and exchange of threats by top officials of the concerned countries continue, the Astana agreement might be in jeopardy. This forebodes some proxy confrontations, which could worsen the situation and cause the political process in Geneva to hang in the balance.

Jasem, however, believes that any attack on Idlib wouldn't have much of an effect on the Geneva talks, which have been "at a standstill for a long time.”

The Syrian regime is threatening to launch new operations to extend control over all of Syria. Assad has mostly managed to push the opposition mainly toward Idlib and rural Aleppo, along the northern border with Turkey, and toward Jordan in the south, following the American, Russian and Jordanian truce. Assad is now seeking to take over the remaining swaths of the country that are not under regime control. Meanwhile, the area east of the Euphrates River remains under the absolute control of the United States and the international alliance fighting against the Islamic State.

Idlib's biggest problem is that it's still under the control of Hayat Tahrir al-Sham — which is internationally classified as a terrorist group — while none of the stakeholders has a clear road map as to how to deal with the situation and secure Idlib’s future. That's why there is talk of a military rather than a political solution.

In light of the terrorist groups and separatist factions that are thriving in some opposition-controlled areas, the major stakeholders might take advantage of the chaotic situation and lack of a political solution. They no longer seem interested in the Syrian people's domestic issues, potential reforms or regime change; rather, they have become mainly focused on fighting terrorism and eliminating extremist groups in Syria.

For instance, Turkey's national security would be threatened by a separatist effort to divide Syria and by the subsequent flow of millions of displaced Arabs.

“Today, any area that remains under the opposition’s control and has any faction that is internationally designated as a terrorist group, regardless of its size, will be a target of the involved stakeholders and will face an unknown and grim fate,” Jasem concluded.