Conventional wisdom has it that Turkish President Recep Tayyip Erdogan and his ruling Justice and Development Party will emerge victorious from snap elections called for June, but a closer look at the current situation in Turkey casts doubt on such certainty. 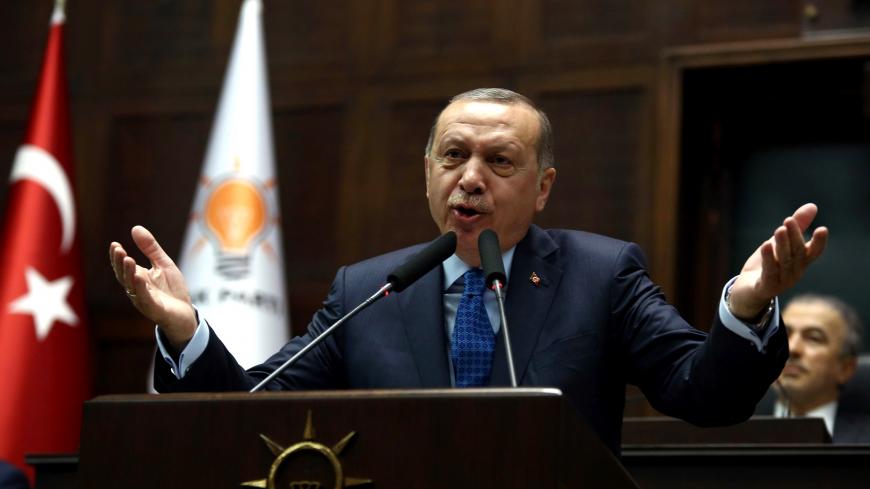 Turkish President Recep Tayyip Erdogan delivers a speech to the parliamentary group of his Justice and Development Party at the Grand National Assembly of Turkey, Ankara, April 10, 2018. - ADEM ALTAN/AFP/Getty Images

As the shock of early elections announced yesterday begins to recede, a sense of inevitability is seizing Turkey. No matter what, Turkish President Recep Tayyip Erdogan will emerge victorious, or so groupthink has it. The presidential and parliamentary votes — moved forward to June 24 from their scheduled date of Nov. 3, 2019 — will be held under emergency rule, seemingly allowing Erdogan and his ruling Justice and Development Party (AKP) to retain their iron grip.

With last month’s sale of Turkey’s last notionally independent media empire, the Dogan group, to a pro-government businessman, state control of public messaging is near absolute. Selahattin Demirtas — the charismatic former co-chair of the largest pro-Kurdish bloc who dazzled voters with his witty digs at Erdogan in past campaigns — sits behind bars, along with thousands of other critics. Meral Aksener, a right-wing nationalist contender, will have difficulty attracting the Kurdish votes deemed critical for defeating Erdogan. Abdullah Gul, the former president and AKP co-founder viewed as Erdogan’s sole credible rival, has thus far shown no interest in running.

Furthermore, a new law passed by the AKP-dominated parliament allowing civil servants to monitor polling, for unstamped votes to be counted as valid and for ballot boxes to be moved around all suggest that Erdogan is bent on winning by any means. Can he? With the odds stacked so heavily in Erdogan’s favor, the answer is probably yes, but it won’t be a shoo-in.

Various opinion polls suggest that Erdogan and his Nationalist Movement Party (MHP) ally, Devlet Bahceli, will between the two of them garner less than 50% of the votes. To win in the first round of balloting, presidential candidates need to surpass 50%.

Aykan Erdemir, a former parliamentarian for the secular, main opposition Republican People’s Party (CHP) and a senior fellow at the Foundation for Defense of Democracies, told Al-Monitor, “If Erdogan were so confident about his own power, he would not be holding early elections. This is the first time we see him showing signs of panic.”

The main reason for Erdogan's concern is Turkey’s unraveling economy. “A relatively stable economy, which kept the AKP in power all these years, is now coming apart at the seams and there is no easy fix,” Erdemir said. “As people’s finances shrink, Erdogan’s talk of Western conspiracies is beginning to ring hollow.”

Max Hoffman, associate director for national security and international policy at the Center for American Progress, concurs. He told Al-Monitor, “I still think Erdogan will win because of the internal incoherence of the opposition, the AKP’s media stranglehold and the new electoral law, which will enable large-scale fraud — but it won’t be a slam dunk.”

Hoffman explained, “Turks are extremely unhappy with the size of the [Syrian] refugee population and the government’s support for them. The economy is in deep trouble. Per capita income is at 2008 levels, and purchasing power is being eroded by inflation and the weak lira. People in the big cities are really struggling to make ends meet, and that undermines the core of the AKP’s pitch.”

Another popular concern is the rapid decline in Turkey’s education system, with its increasing emphasis on Islam. One Istanbul housewife, Sinem (not her real name), echoed widely held views when she groused to Al-Monitor, “They [government-run schools] were teaching my 8-year-old granddaughter how to be a good housewife, to knit washcloths for her future husband and children.” In a telephone interview, Sinem said that like many of her friends, she has been forced to dip into her pension to help pay for private school.

Cihangir Islam, a prominent Muslim intellectual and human rights defender, said the AKP’s “spell was broken” in the June 2015 parliamentary elections. That is when the AKP lost its legislative majority for the first time in 13 years, largely because Demirtas’ Peoples’ Democratic Party (HDP) surpassed the minimum 10% threshold to win seats in the parliament, another first. Erdogan immediately set about torpedoing opposition efforts to form a governing coalition, forcing new elections months later, in November, which the AKP won handily amid fears of instability sown by its own propaganda machine.

The myth of AKP invincibility was shattered yet again in the April 2017 referendum on switching from a parliamentary governing system to Erdogan’s long-coveted executive presidency. The yes votes narrowly prevailed amid widespread allegations of ballot stuffing. Islam, however, said this “was a Pyrrhic victory.”

He said Bahceli, rattled by the steady bleeding of MHP members to Aksener’s Good Party, forced Erdogan’s hand in the call for early elections. Islam said, “The genie was out of the bottle. The government had no other choice." He said political and economic instabilities "would have otherwise mounted to further, unsustainable levels.”

A source close to Turkish Prime Minister Binali Yildirim sees things differently, however, describing the decision to hold snap elections as “carefully choreographed theater” by Erdogan and Bahceli designed to take the opposition by surprise. “Bahceli depends on Erdogan and not the other way round,” the source told Al-Monitor. In any case, the emerging chinks in Erdogan’s armor might temper the fighting spirit of the election-weary AKP.

“Objective eyes clearly perceive the discouragement among active members of the AKP who suffer from single-man management leader syndrome,” said Islam, alluding to the perception that Erdogan and his narrow circle of family and business cronies make all the decisions and that the party has lost much of its influence.

The lack of motivation among the AKP rank and file may well affect the party’s performance in the parliamentary elections, which are frequently overlooked amid all the chatter about Erdogan and the presidency. Potential electoral alliances between Aksener and the small pro-Islamic Felicity Party combined with a good showing by the HDP and the CHP could deny the AKP a majority as in June 2015. Umit Ozdag, a top Aksener lieutenant, confirmed that they were exploring just those options.

The notion that the parliament will be “shorn of all power” under the soon-to-be-formalized presidential system is a misconception, Alan Makovsky, another CAP senior fellow, said in a recent report. Although the president will amass vast authority, parliament will, for example, retain the power to enact, amend and repeal laws, debate and adopt budget bills and final accounts, print liras and declare war, and overturn presidential decrees — “at least on paper.”

Makovsky wrote, “The reason that many people think that Parliament has no power under the new system is that they assume Erdogan will win the presidency and the AKP will win a parliamentary majority.”

What if, skullduggery notwithstanding, the AKP doesn’t win a majority? Erdogan’s presidency then would rest on a bed of parliamentary thorns.

Short of drastic structural reforms, Turkey’s economic woes are not going away any time soon. The June contests will be the first elections in Turkish history in which voters will cast separate ballots on the same day for president and parliamentary representatives. Makovsky said that “it cannot be assumed that every Erdogan voter will pull the lever for Erdogan’s AKP in the parliamentary vote.”