An Egyptian backpacker is on his way by bike to Russia for the World Cup. 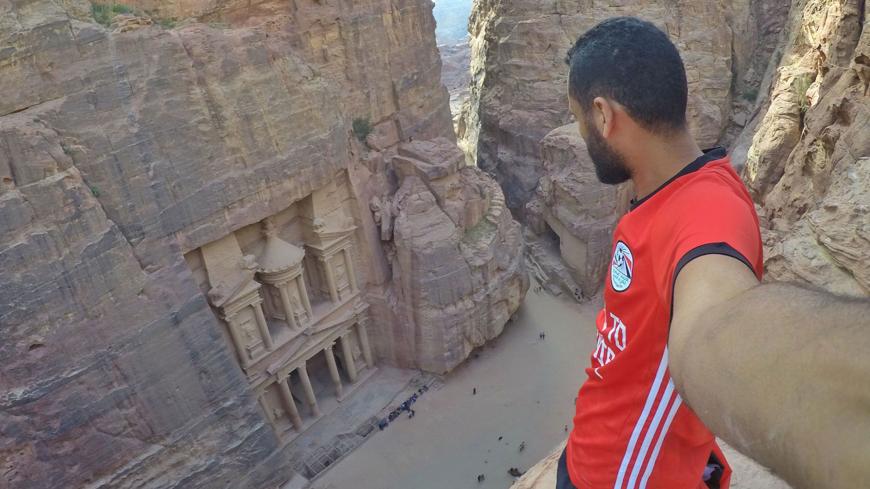 Driven by his desire to cheer for the Egyptian national soccer team during the World Cup in Russia, Mohamed Nufal has started a two-month bicycle tour that will take him to at least half a dozen countries.

His trip started in Tahrir Square in Cairo, from where he cycled across the Sinai Peninsula before crossing by boat the Gulf of Aqaba to Jordan. There he visited the archaeological city of Petra, swam in the Dead Sea and passed by Lot’s Cave; Nufal is now cycling through Amman. En route to Russia, where he hopes to arrive on June 8, he plans to pedal through Iraq, Turkey, Bulgaria, Romania, Moldova and Ukraine.

Nufal announced his cycling trip from Cairo to Russia in an interview with Al-Arabiya on Jan. 7.

In 2017, Nufal gained national fame when he self-financed a cycling tour through South Sudan, Chad and Gabon to attend the Africa Cup of Nations. The Egyptian Ministry of Youth and Sports is sponsoring Nufal's current journey.

Before setting off on his World Cup journey in April, Nufal told Al-Monitor that the ministry's support has made it easier to obtain visas and avoid other difficulties that may arise while crossing borders.

“On my journey to Gabon, I was arrested and questioned by the security forces in Chad. They took my passport and all my gear and cameras. I was detained for several days until they figured out the nature of my trip. They let me go and gave me back my equipment,” he said. “Before any trip I spent weeks or maybe months getting in touch with people from the countries I intend to visit in order to arrange accommodation, but also for security reasons in some desert and mountainous areas. Sometimes I face financial difficulties, as some people offer to host me for free and others ask for payment.”

He added that on his trip in 2017, for instance, he avoided the Boko Haram-controlled areas in Cameroon. This time, he will fly over Syria to avoid dangers of the civil war there.

Nufal shares photos and videos of his cycling tours on his Facebook page.

Mona al-Minyawi, the head of the Cairo-based ERTU Shabab wal Riyadiyah (Youth and Sports) radio station, told Al-Monitor that the station covers Nufal’s journey with daily reports. “The radio station also covers his adventures in the different countries that [Nufal] travels through on his 65-day trip,” she said.

Minyawi noted that the ministry’s endorsement of Nufal’s cycling tour could encourage young Egyptians to follow his lead and travel more, with modest means. Backpacking, particularly across borders, is not common among Egyptian youths, partly because they face many bureaucratic difficulties, including visas. She added that Nufal is one of the rare visible examples in the country.

“This trip will catapult Nufal into the limelight as an international traveler or backpacker, which will allow the Egyptian government to benefit from his journey to promote Egyptian tourism on social media networking sites,” Minyawi said.

Egyptian journalist Rania al-Adawi told Al-Monitor that tourism programs inspired by Nufal’s and other backpackers’ trips could be organized from Russia or Europe to Egypt with a fixed itinerary, as well as with appropriate insurance schemes and protective measures for such long trips.

Adham Hamshari, an Egyptian backpacker and member of the Egyptian Backpackers Association, told Al-Monitor that the state and the sponsors should use backpackers as ambassadors to promote cultural exchange.

Hamshari said that Facebook posts by backpackers are a new tool that raise awareness among millions of Egyptians. These social media posts offer insight into the most important traditions and customs in every country that travelers visit.

Wagih Azzam, head of the Egyptian Cycling Federation, told Al-Monitor, “Egyptian backpackers have played a major role promoting biking as many Egyptians have recently showed interest in this sport, which is very beneficial for those who cannot go to the gym. Biking can be done on your way from and to work, and it is very good for the health of young people and a useful way to fill their spare time instead of turning to drugs.”