Afcon soccer tourney gives Egypt chance for glory both on, off field

Egypt is getting only a small amount of time to prepare for Afcon 2019, but the major soccer tournament could pay off big time. 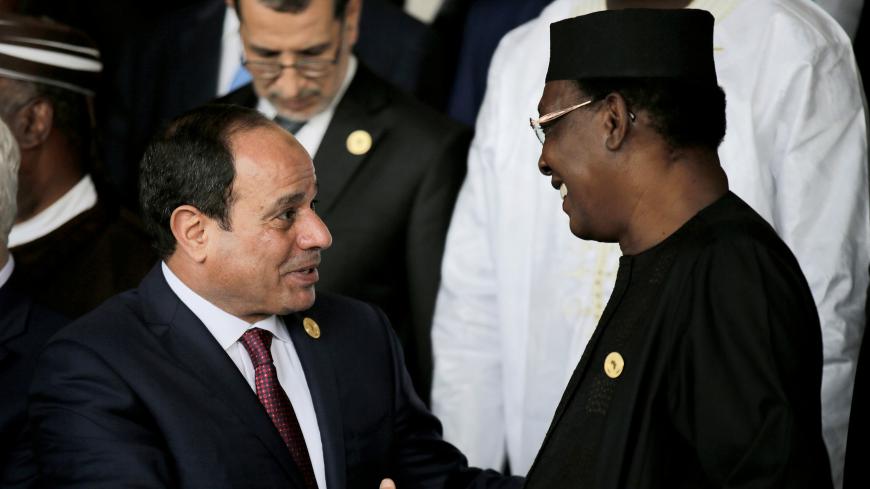 Egyptian President Abdel-Fattah el-Sisi talks to Chad's President Idriss Deby at the 30th Ordinary Session of the Assembly of the Heads of State and the Government of the African Union, Addis Ababa, Ethiopia, Jan. 28, 2018. - REUTERS/Tiksa Negeri

CAIRO — Egypt will be hosting the Africa Cup of Nations (Afcon) soccer tournament this summer, a major event that presents the country with a challenge, but also an opportunity to return to the international sports-hosting spotlight.

The Confederation of African Football (CAF) on Jan. 8 named Egypt to host Afcon, replacing Cameroon, which defeated Egypt for the tournament title at the 2017 event in Gabon. Cameroon was stripped of its 2019 Afcon hosting rights because of delays in completing the necessary construction and infrastructure work. There have also been concerns about separatist violence.

The late change means Egypt will face a short, demanding preparation schedule for the June 15 to July 12 tournament, perhaps complicated by the league's decision to expand Afcon from 16 teams to 24 beginning this year. And there is always the danger of political unrest and violence.

A massive riot broke out in 2012 at Port Said Stadium following a soccer match between Al-Masry and Al-Ahly. More than 70 people were killed. Also, in 2015, at least 20 Zamalek fans were killed in a stampede outside Air Defense Stadium in Cairo.

The tournament is held every two years. This marks the fourth consecutive time the Africa Cup of Nations has had to change the venue, each time for political or preparedness reasons.

But Egypt welcomes the CAF decision, which will bring the country back into the public eye for hosting major championships after a long hiatus. Egypt hosted the 2006 Afcon, and in 2009 it hosted the FIFA U-20 World Cup.

Egypt hopes to seize this opportunity to boost its tourism sector, which suffered a decline in revenues following the January 25 Revolution in 2011 and the political turmoil that followed. The situation was compounded in 2013, when millions of protesters demanded the ouster of President Mohammed Morsi; after he was deposed, there were subsequent terrorist operations targeting tourist facilities.

Experts told Al-Monitor that Egypt’s hosting of Afcon could help revive the industrial, tourism and sports sectors if the event is well-promoted.

Mohammed Abdel Salam, head of the Ready-Made Garments Department in the Federation of Egyptian Industries, told Al-Monitor that he thought the Africa sector is likely to boost the Egyptian apparel industry, particularly from sales of shirts bearing the logo of the Pharaohs, Egypt's national soccer team. Such apparel will be in high demand before and during the matches, but especially in April and May.

The decision to float the Egyptian pound in November 2016 led to a decline in general sales and Egyptians’ purchasing power, especially hitting the clothing market, according to the Federation of Egyptian Chambers of Commerce.

Abdel Salam said the Africa Cup will revive the ready-to-wear and textile sectors and open the door for companies to invest in Pharaohs shirts, and sportswear in general.

In the same vein, Ahmad Gaber, president of the federation’s Chamber of Industry and Printing Industries, said in a press statement Jan. 8 that Egypt will benefit from Afcon in terms of promotions, advertising and proceeds from game tickets.

In response, Minister of Tourism Rania al-Mashat said in a Jan. 9 press statement that Egypt's selection as Afcon host reflects the country’s stability and ability to hold major sports tournaments. She added that these events “shed light on Egypt and Egyptian cities where the games will be held.”

The Ministry of Tourism will coordinate with the Ministry of Youth and Sports to promote Egypt as a major tourist destination by showcasing the country’s touristic landmarks before and during the African Cup, the minister said. Mashat also suggested using the stadiums where the games will be held as platforms for promotional products in relation to the People 2 People campaign and to promote the opening of the Grand Egyptian Museum (GEM 2020).

Amani Al-Taweel, director of the African program at Al-Ahram Center for Political and Strategic Studies, said that in addition to winning Afcon hosting rights, Egypt is this year's chair of the African Union (AU).

"Egypt should exploit [Afcon] to enhance its bilateral relations with the AU countries and encourage African fans to visit to cheer for their teams," she told Al-Monitor.

“Soccer is the most important soft force that gives Egypt leverage at the African level, especially with the participation of Liverpool star Mohamed Salah with Egypt’s national team. Salah’s international and global fame will enhance the image of Egypt abroad.”

Amir Abdel Halim, a sports critic on Al-Gol local website, told Al-Monitor that hosting the Africa Cup is a great gain for Egypt on the sports level. “Egyptian fans will fill the stadiums again. I think the people will no longer accept empty stadiums when the championship is over."

Abdel Halim added, “Egypt is expecting financial returns from CAF for television broadcasting because the championship broadcasting rights were already sold before Egypt was named as a host. This, of course, would facilitate the work of the Egyptian Football Federation to develop stadiums for the matches.”

The Africa Cup will serve as a good opportunity to stimulate African tourism in Egypt following the decline in numbers. According to a 2016 report issued by the Central Auditing Organization, the number of African tourists coming to Egypt is small. In the first half of 2015, the number was estimated at 192,000, with Sudanese tourists accounting for 46.8%, or about 90,000 people.