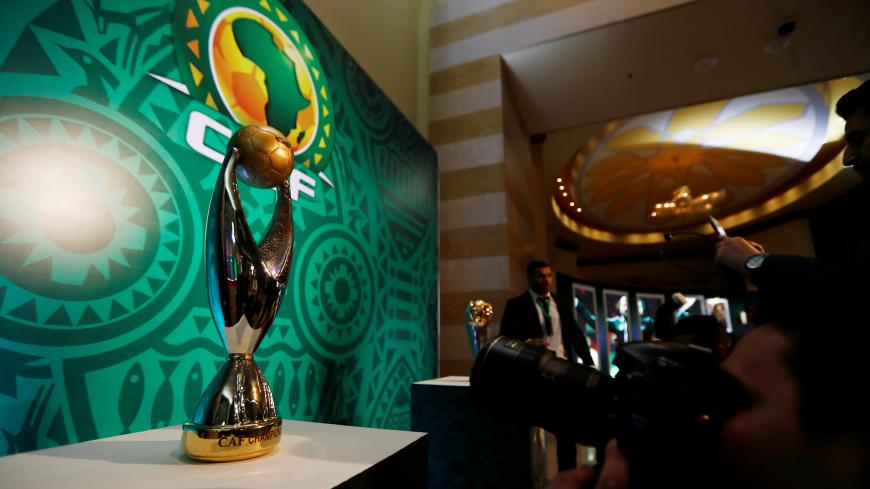 CAIRO — The Confederation of African Football (CAF) announced Jan. 8 that Egypt will host, from June 15 to July 13, the 2019 Africa Cup of Nations (Afcon) soccer tournament. This was seen as a victory for the Egyptian advertising and sports marketing agency Presentation Sports. According to previous statements by Hani Abu Rida, president of the Egyptian Football Association (EFA), Presentation Sports is a state-owned company.

Presentation Sports started operating in 2010 in the field of advertising and entered the sports field in 2015. It now has exclusive media sponsorship rights of the EFA, the Egyptian national soccer team, the Egyptian Premier League and Egyptian Cup, and the majority of Egyptian clubs, most notably Al-Ahly and Zamalek. In 2016, the Egyptian Media Group (EMG) owned by Ahmed Abu Hashima, a business tycoon and very close ally of the regime of Abdel Fattah al-Sisi, acquired 51% of Presentation Sports. Abu Hashima later sold his stake in EMG in 2017.

EMG owns a number of satellite channels, newspapers and websites such as Al-Hayat, ON TV, CBS, Al-Youm Al-Sabeh, Soutalomma and other media outlets.

Presentation Sports exploited its monopoly of the sponsorship rights of the Egyptian Premier League by granting EMG-owned ON Sport TV exclusive broadcasting rights in July 2018. This allowed EMG to reap all advertisement profits during league's matches.

The strength of Presentation Sports seemed apparent during the election battle for the CAF presidency between Issa Hayatou and his rival Ahmad Ahmad in 2017.

Presentation Sports had voiced its rejection of Hayatou, the president of CAF for 29 years. As soon as the elections ended and Hayatou lost, it issued an official statement on March 16, 2017, affirming that it had used all means to prosecute CAF under Hayatou.

Presentation Sports had filed a complaint with the Egyptian Competition Authority in January 2017, which in turn referred the matter to the Egyptian Public Prosecution and the courts. In March 2017, it also resorted to the Common Market for Eastern and Southern Africa accusing CAF of helping French media company Lagardere Sports to buy in September 2016 the worldwide rights of Afcon and CAF Champions League, from 2017 to 2028, amid unfair competition. Lagardere Sports sold these exclusive rights to the Qatari-owned BeIN Sports Qatar in October 2016.

On Dec. 25, 2018, Ibrahim Saeed, a former Egyptian national team player, lamented the dominant practices of Presentation Sports. On Twitter, he wrote, “The sponsor company intervenes in everything in Egyptian soccer, coaches, players, media and clubs.”

Mohammed Banhawy, a sports critic at Al-Ahram newspaper, agreed with Saeed, telling Al-Monitor, “Presentation Sports has affected the soccer industry both positively and negatively. It pumped huge amounts of money into the sponsored soccer clubs and the [EFA] by sponsoring clubs and helping them increase their resources and conclude contracts with new players. This gave a strong boost to the Egyptian soccer industry rocked by an audience ban over the last six years following fatal clashes among fans.”

Following the clashes that erupted at the Port Said Stadium during the match between Al-Masry and Al-Ahly in 2012, Egypt’s government imposed its first ban on soccer audiences for three years. The ban was reimposed in 2015 after at least 20 fans died in a stampede at the Air Defense stadium in suburban Cairo during a match pitting Zamalek against ENPPI. In August 2018, the government decided to partially lift the audience ban and allow the entry of 5,000 fans to the stadiums.

Banhawy said, “Over time the negative effects appeared when Presentation Sports dominated the sports market completely and merged with EMG that owns a large number of channels and newspapers. Presentation Sports chose the sports analysts who appear on its channels exclusively airing the Egyptian Premier League. Behind the scenes, the sponsoring company selected players and coaches by taking advantage of its control over the sports arena and the huge funds it pays to clubs.”

He added, “There are certain sports figures — not only coaches and analysts — who are known for their good relationship with the company. EFA chose the sponsoring company in an official tender in July 2017. But four EFA members work at TV stations owned by Presentation Sports — EFA Vice President Ahmed Shobier, Hazem Imam, Seif Zaher and Khaled Latif. This is contrary to laws that prevent officials from achieving personal interests through their posts.”

He said that the company fights and shuns anyone who criticizes its practices, noting, “Those who work in the sports sector are now forced to praise Presentation Sports’ monopolistic practices or otherwise risk becoming unemployed.”

Sanad added, “Presentation Sports’ practices have undermined the sports industry. A large number of media professionals, coaches and athletes are being alienated from the sports scene. Working in the sports market requires being on good terms with the sponsor.”

According to Sanad, everyone in the sports community knows that to get a job in the sports sector, one does not need competence but only a personal relationship with the sponsoring company. “There are specific figures who are training at soccer clubs and if they fail the sponsoring company would move them to train at another club. Qualified trainers are being excluded because they have no connections with Presentation Sports.”