Egypt has passed a law setting up measures for the seizure, assessment and managing of financial assets belonging to designated terrorist groups. 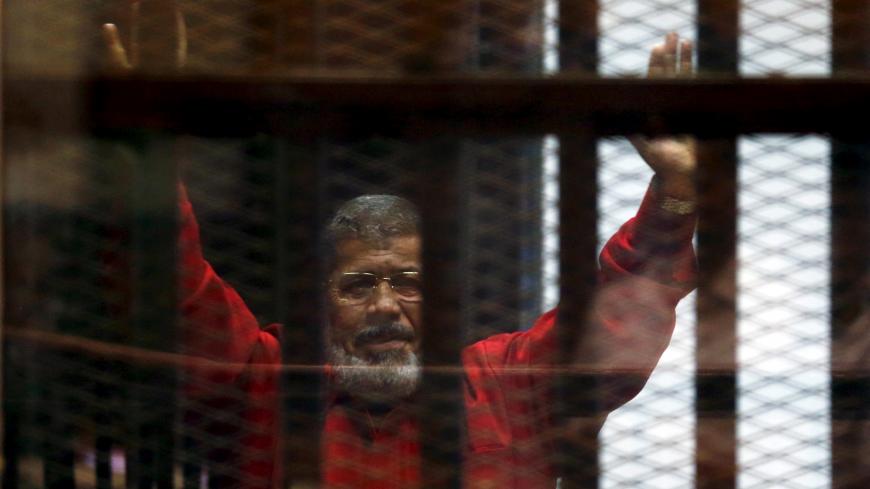 Egypt's deposed President Mohammed Morsi greets his lawyers and others from behind bars at a court wearing the red uniform of a prisoner sentenced to death during his court appearance with Muslim Brotherhood members on the outskirts of Cairo, Egypt, June 21, 2015. - REUTERS/Amr Abdallah Dalsh

Egypt’s parliament approved on April 15 a draft law to allow the seizure and assessment of funds of terrorist groups. On April 21, President Abdel Fattah al-Sisi signed it as Law No. 22 of 2018.

The group and its members have invested heavily in hospitals, schools, shopping malls and other real estate, in addition to both agricultural and desert lands, investment companies and online news platforms. The Egyptian government has been seizing these funds since 2014 without any legal structure to manage the process.

In 2013, the Egyptian government labeled the Brotherhood a terror group following the ousting of former Islamist President Mohammed Morsi. The next year, the government formed a committee to evaluate the activities and oversee the confiscation of funds of the group and its affiliates.

Since then, the committee has been working to determine the value of the Muslim Brotherhood's funds and assets. The Cairo Court of Urgent Matters ordered their sequestration, and the government seized the funds of dozens of companies, hospitals and schools in addition to hundreds of individuals and nongovernmental and charity organizations. However, a higher administrative court annulled the sequestration order.

The new law, which consists of 17 articles, calls for the establishment of an independent committee of judges who will be responsible for overseeing the seizure and management of the assets of groups, entities or individuals determined to have perpetrated terror.

Article 10 requires governmental and nongovernmental bodies, authorities and banks to help the committee and its representatives obtain and examine any pertinent documents and relevant data in a timely manner.

The law also states that anyone who refuses to provide the committee with information or documents necessary for undertaking its duties will be sentenced to a jail term of not more than one year and fined between 10,000 Egyptian pounds ($568) and 50,000 pounds ($2,840). Violators will also face suspension from employment for another period equal to their jail terms.

According to local media outlets, judicial sources have stated that in 2014 alone, the total seized funds of the Muslim Brotherhood group stood at 60 billion pounds ($340 million).

Bassant Fahmi, a member of the parliament’s economic affairs committee, backed the parliament’s decision to approve the law, saying it will drain the funding sources of terrorist groups. She told Al-Monitor, “Article 237 of the constitution obliges the state to combat and confront terrorism, and one of the means of confrontation is a financial embargo and draining sources of funding.”

Fahmi said that these funds, which are being used to perpetrate terrorist operations against Egyptian police and military forces as well as civilians and to disrupt public peace, “have to be directed to the families of the victims of terrorist acts alongside the development of the national economy.”

However, Fahmi added, the state is still in the process of seizing and processing these funds and has not yet ascertained whether they have all been used in connection with terrorist operations. “The state will only be able to make use of the funds that have been proven according to the law to have been used in spreading terrorism and targeting stability and security in the country,” she said.

Fahmi also said that the government will need help from specialists to make the maximal economic use of the funds. According to the law, the committee will be responsible for appointing fund managers for the task.

Amr Hashem Rabei, deputy head of Al-Ahram Center for Political and Strategic Studies, said that passing a law on transitional justice ought to have come before signing this bill into law and questioned whether the government will make the best economic use of the seized money.

“The transitional justice law aims to pave the way for national reconciliation, compensate the victims and hold anyone who has perpetrated terrorist acts accountable for them, in accordance with international standards,” he told Al-Monitor. “In my opinion, this law on seizing the funds of terrorist groups will affect more than 700,000 people who work for the businesses owned by the Muslim Brotherhood.”