Palestine's Al-Harah Theater is one of the 11 finalists for the Ellen Stewart International Award, a prestigious prize for theater companies that promote social change. 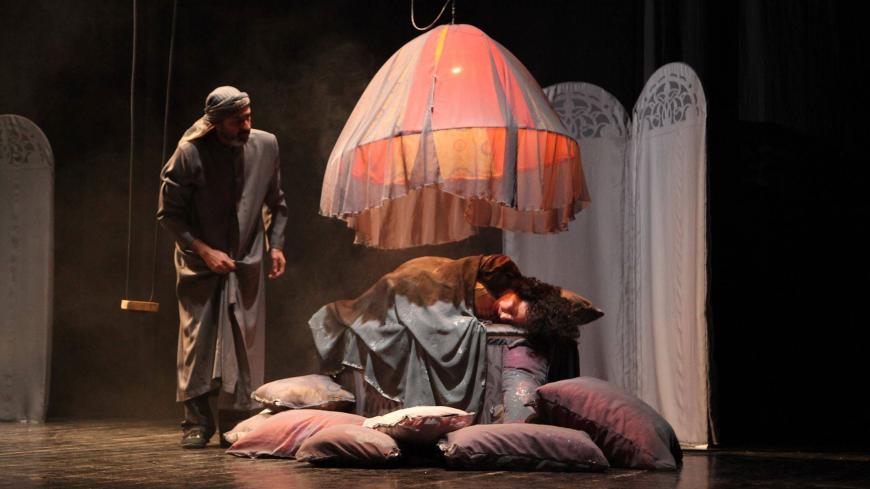 Al-Harah Theater is one of 11 finalists for the Ellen Stewart International Award, a prestigious prize presented to theater companies that promote social change and community participation with a particular emphasis on engaging young people. Located in the West Bank town of Beit Jala, in Bethlehem province, it is the only finalist from the Palestinian territories. Other Middle Eastern finalists are the Garage Theater in Iran and Zoukak in Lebanon. The finalists were selected in a public vote conducted online. The winner will be determined in one month in another online vote.

Winning the Ellen Stewart award would represent a milestone for the small company, which was founded by a group of multitaskers in 2005. The winner will attend the International Theatre Institute World Congress, be awarded an artists’ residency at La MaMa Umbria to create a new work and receive financial and production support to present the new work at the Spoleto Festival of Two Worlds.

In 2005, Al-Harah launched a joint project with the Swedish Culture Center for “Longing [for] the Sea,” a production about a child’s wish to realize her grandfather’s dream of returning to Haifa, his hometown, and see the beach. The play tackles the issue of displaced Palestinians' deprived access to the sea. It was a door opener for Al-Harah. The company introduced itself to the international theater scene, touring Egypt, Jordan and Sweden to perform the play. For Al-Harah, the Ellen Stewart award could help expand its horizon even more.

“We hope to win this award, as it would motivate us further,” Mariana Barham, Al-Harah general manager, told Al-Monitor. “We invited friends and acquaintances to vote for us online in the first stage. Winning will give us a strong push and will spread the word about Al-Harah Theater and its work. It will also help us build international relations and partnerships.”

Al-Harah relies on foreign funding — such as from the European Union, embassies and international nongovernmental organizations — and co-organizing for projects with different theater groups and organizations. For example, in 2013 it worked with Teatro Due Mondi from Italy as well as Oxfam Italia to share artistic experiences and produce “Wit,” a play about the problems confronting Palestinian youths in their daily lives.

The shows are linked to available funding, with simple yet effective staging. Al-Harah's management hopes that the Ellen Stewart International Award will increase their profile worldwide and make it easier to obtain financing.

Al-Harah produces three new works each year. It also revives plays from previous years. On average, the theater stages some 120 shows per year, mostly in Beit Jala, including plays for children.

Al-Harah Theater draws inspiration from the Palestinians' reality as interpreted in novels as well as from real life. “Myrmy,” the theater's latest play, was presented in Ramallah on Feb. 15. It is based on “Living Memory,” a published collection of real-life stories of refugees compiled by Palestinian researcher Faiha Abdul Hadi. The play focuses on six refugees to present the typical experiences of the others.

The director, Mirna Sakhla, chose to play on the five senses, focusing especially on taste and smell. The play opens with the aroma of sage emanating from water boiling on an old stove.

Sakhla told Al-Monitor, “We used sage during the show to embody the smell of the country, to show that the characters in the play, who were displaced, took it with them all around the world.”

Sakhla has worked with the theater since its founding, starting as a 15-year-old trainee. She then studied drama in Britain and returned to Al-Harah as a writer, director and producer.

“We consider ourselves a theatrical troupe, and we believe theater should touch people,” Sakhla remarked. “In our country, theatrical education remains underexplored, and we still do not have a proper venue. We only have a rehearsal hall, both for rehearsals and for our performances.”

Perhaps there is cause for hope, and a proper venue, at hand. Sakhla said that the attention from the Ellen Stewart International Award and the voting process — and consequent interactions through social media because of them — have already stirred additional interest in Al-Harah.