The Cairo International Festival for Contemporary and Experimental Theatre remains one of the most prestigious events for theater groups that opt for novelty on stage — but is there an audience in Egypt? 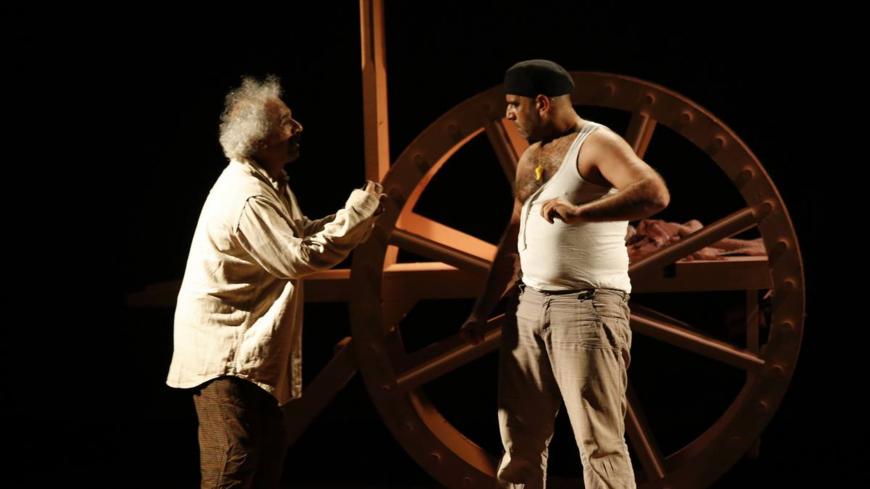 A scene from one of the plays at the Cairo International Festival for Contemporary and Experimental Theatre, Cairo, Egypt. Posted Sept. 27, 2017. - Facebook/cifcetofficial

The 24th Cairo International Festival for Contemporary and Experimental Theatre (CIFCET) kicked off Sept. 19 with 27 local and international performances by professional theater companies from the United States, Russia, Chile, Iraq, Morocco and Jordan.

The festival, which is sponsored by the Egyptian Ministry of Culture and lasts until Sept. 29, is one of the biggest international theater festivals in Egypt. It is also one of the most controversial, ever since its founding in 1988, as advocates of traditional theater criticize its experimental aspects as elitist and detached from what audiences are interested in watching.

The festival made a comeback in 2016, after a five-year hiatus. Before 2016, its name had been the Cairo International Festival for Experimental Theatre, but it added “contemporary" to the further anger of its critics, who claimed that the festival had become a hodgepodge of different theater styles, all of which were unappealing to Egyptian audiences.

Naser Abdel-Moneim, the festival’s coordinator and the head of the selection committee for foreign plays, disagrees, telling Al-Monitor, "Adding 'contemporary' to the original name of the festival has increased the categories of performance that we choose for the festival."

This year, the New York-based company Theater Mitu will perform Arthur Miller’s masterpiece “Death of a Salesman” at the festival, after a critically acclaimed, sold-out run at the Brooklyn Academy of Music. The play runs for more than 2½ hours.

"It is classical but an outstanding play — that's why we chose it. If we did not add the 'contemporary' criterion to ‘experimental,’ we would not be able to have this great play here," Abdel-Moneim said.

Two other American theater companies are participating in the festival: Performance Space 122 with “Go Forth,” a performance inspired by the "Egyptian Book of the Dead" that combines a photo installation with mime, dance and songs; and LaGuardia Performing Arts Center with “Privatopia,” which tackles the increasing fear of "otherness" rampant in modern societies in a production that imitates the Theatre of the Absurd.

Women’s issues are a dominant theme of the festival this year. A play from Jordan titled "Shadows of a Woman," written by Hazaa el-Barari and directed by Eyad Shatnawi, tells the story of three women who meet by coincidence in an abandoned railway station as they wait for a train that will never arrive. Each woman is sharing her memories of being exploited and abused. During the play, they tell their stories and express their fears.

A Tunisian performance titled "Women in Love and Resistance," written by Mariam el-Akkary and directed by Fathi el-Akkary, highlights the historical battles of Tunisian women to free themselves from patriarchy, moral and even religious constraints.

"We formed a committee that chose the plays according to artistic criteria,” Abdel-Moneim said. “We chose high-quality performances and if there was more than one great performance from one country, we chose them all."

The number of festival participants this year almost doubled compared to 2016; the number of international performances increased from 10 last year to 20 this year, in addition to seven Egyptian plays.

However, the increase in participants has not convinced the critics. Egyptian writer and critic Atef el-Nemr is one of those who believes experimental performances have no place in theater. "Theater trends have always been named after schools of philosophical thought. You can have realism or expressionism in theater, just like in philosophy. But 'experimentalism' simply does not exist as a trend on its own — neither in theater nor in philosophy," Nemr told Al-Monitor.

"Theater should be for ordinary people who pay taxes,” Nemr noted, adding that the festival had an “alienation effect,” causing a detachment between what people see on stage and what is relevant to their lives.

"Due to this festival, some young actors started to imitate the performances they see on stage. They believe that this is what international theater looks like, but this is incorrect," he said. "This outlook alienates them from the problems and issues that they should tackle. If you don't present a theater that features your own problems, people won't watch you."

Abdel-Moneim said there were many kinds of theater and that experimental theater was one of them, underlining that the festival introduced to the Egyptian audience performances and interpretations they would not normally have access to.

"Many people only know or prefer to watch commercial theater that is promoted by the media, but this is not the only theater that exists," he added.

German theater researcher Torsten Jost, who is a faculty member of the Institute for Theater Studies at Freie Universitat Berlin, told Al-Monitor, "Experimental performances are not destroying anything — it is just enriching our perspective. Tradition always has to be renewed. I am happy to be part of this festival because it enables me to see Egyptian, regional and international performances.”