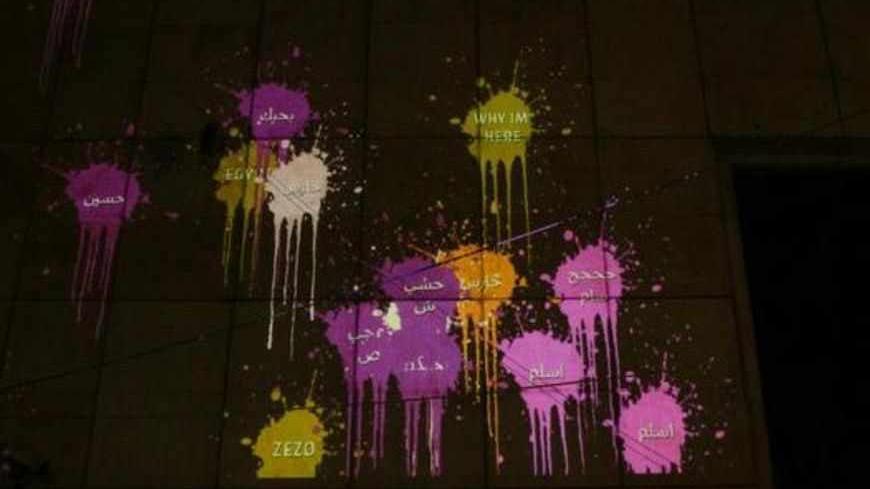 SMSlingshot by VR/Urban was featured at the Digital Art Festival in Cairo in April 2013. - Mostafa Abdel Aty

CAIRO — A man holds a placard of former presidential candidate Hamdeen Sabahi and faces a screen playing footage identical to the man’s surroundings, almost. On the screen, the sign he’s holding turns into a photo of Muslim Brotherhood leader Khairat El-Shater. The other signs featuring non-Islamist leaders appear as either Islamist politicians or members of the Mubarak regime. Chants supporting President Mohamed Morsi echo through that Zamalek street.

Sameh El-Tawil was taking pictures and video footage. He said he’ll post the “fake” video online showcasing the distorted image of reality, his own commentary on the nation’s media and political scenes providing both a backdrop and inspiration to his and others’ digital installations that breezy March night.

"Vs.", an Augmented Reality, interactive art work by Sameh Al Tawil within the Di-Eg festival in Cairo, Egypt.

Inside the hall of the Gezira Art Center, Mohamed Shokry trapped viewers entering his dark room with green laser rays. Inside the “Trap,” which lured them in with a palm-sized horizontal screen and the sound of a talking man, a closer look revealed “Renaissance” written on the screen, a reference to the Muslim Brotherhood’s proclaimed, and often mocked, project for Egypt.

Their installations were part of the Digital Art Festival that kicked off in late March. The festival came on the heels of the Cairo Jazz Festival and overlapped with the Hal Badil (Alternative Solution) Festival. It was followed by the Downtown Contemporary Art Festival (D-CAF), and in between numerous smaller-scale festivals and cultural events dotted calendars and Cairo venues. This spring-timed bloom of visual arts, film screenings, musical and street performances was, like all things Cairo now, tainted and peppered with politics.

The melodic electronic thumbing of Maurice Louca engulfed an enthralled audience in a psychedelic trance. Days later, also at the Townhouse Gallery that offered its factory space to the low-budget Hal Badil fest, Like Jelly belted their politicized satiric lyrics to a crowd overflowing into the surrounding side street, merging with and battling for space around the tables of the outdoors Takeiba Café.

The festivals simultaneously offered an alternative reality that tickled audiences’ aesthetic senses, while also succumbing to the actual reality — sometimes forcefully as the stench of teargas hovered over the air as police cracked down on protests few blocks away. Performers chose to interpret this reality in creative formats, often blurring the boundaries of art forms and with their audiences, and curators offered the artistic interpretations of other countries’ political and social turmoil.

“We are not making political statements,” said Ahmed El-Attar, the art director of D-CAF, which concluded its second edition on April 28 with a concert by Egypt’s Dina El-Wadidi joined Tunisia’s Emel Mathlouthi. The aim is to present a contemporary art festival that takes audience into another reality for maybe different perspective.

“It can make them travel in their own space and see it in a different light. It could open doors of them perceiving other cultures, other practices. It could show them ways of presenting questions or raises questions in the mind about presentation and about art,” he added.

The festival offered a mix of local and West African films, contemporary dance, and theater performances from Iran, France and the Netherlands that, according to El-Attar, broke conventions about this type of performance art.

For three nights, the festival invited passersby and street cafes’ customers to slingshot paint and written messages on the wall of the Central Bank in downtown Cairo. The messages, projected digitally, first comprised participants’ names, then quickly turned political.

“[SMSlingshot] is not a political piece. It became political because of the context it was shown in and who’s there at the moment,” El-Attar argued.

Art, which could offer a refuge or a brief break, is at the end of the day a product of the society it’s born into. The infusion with politics isn’t new, according to cultural critic Joseph Fahim. There was politicized art under Mubarak, “but not that confrontational,” he added.

Digital art, which featured prominently in numerous festivals and events this past few months, distorted the traditional lines defining political art and expression. Its interactive nature blurred the boundaries between the artist and the spectator, inviting the audience members to intervene in the innovative process and shape the artwork into a unique experience of their own.

At the digital festival, Yasmine Elayat set up a face orchestra, whereby visitors made music with their facial expressions. She later rejoined the OpenLab Egypt team to create a different version of their February interactive project with Germany’s Kazoosh. Instead of playful gimmicks between Cairo and Dresden, this time the teams split up between Vinoisse Hotel in downtown Cairo and the Medrar gallery in Garden City, the nearby neighborhood now separated by numerous security-constructed concrete walls. When protesters marched through these walled streets right under Medrar’s balcony, Vinoisse’s visitors got a glimpse of the action through a camera they controlled remotely. Like the SMSlingshot, interactivity was again taken to the street in a collaboration between Elayat and famous graffiti artist Ganzeer, whereby a changing face projected through a shop window moved its eyes to follow passersby’s movement.

As artists moved between festivals, audiences did too. On some nights, as events overlapped, familiar faces were hopping from one festival to the other. The concentration of events in downtown Cairo turned its streets, restaurants and cafes into an exchange hub for artists of different nationalities. Yet, this momentary cultural explosion was condemned by some observers as contained, both geographically and demographically.

Al-Attar disagreed. The D-CAF attracted a crowd beyond the traditional downtown regulars, from Cairo and other provinces, he said.

Infrastructure continues to be a major obstacle in geographical reach, Fahim explained. Downtown combines a wealth of old and new venues that could accommodate different type of arts — something that doesn’t exist in other wealthy and poor neighborhoods, much less other provinces. With few exceptions, “no one is looking beyond our limited vicinity,” he said.

There’s no barometer to measure how effective these events were in reaching out to a varied and wide audience. The festivals get the added bonus of taking art to the street, right to those who wouldn’t walk into a theater or a gallery, albeit within one Cairo neighborhood. Within the limitations of this geographical concentration there was also a political statement, even if the organizers didn’t intend it to be. It invited audiences to a district seen by many as a continuous “war zone” between security and protesters. Holding a cultural festival in downtown Cairo could be portrayed as a message of defiance to the system, according to El-Attar, so is the decision by the audience to attend.

Planned or not, in downtown Cairo and adjacent districts, lines between art and politics were blurred in a metamorphic collaboration shaped by both artists and spectators.

Sarah el-Sirgany is a Cairo-based independent journalist. She contributes to Al-Akhbar in Lebanon and CNN among other regional and international publications and networks. She was the deputy editor of Daily News Egypt and has co-written Diaries of the Revolution. You can follow her on twitter, @Ssirgany or email her at ssirgany@gmail.com.