In the basement of an old building in Alexandria lies an art space that once served as a bomb shelter. 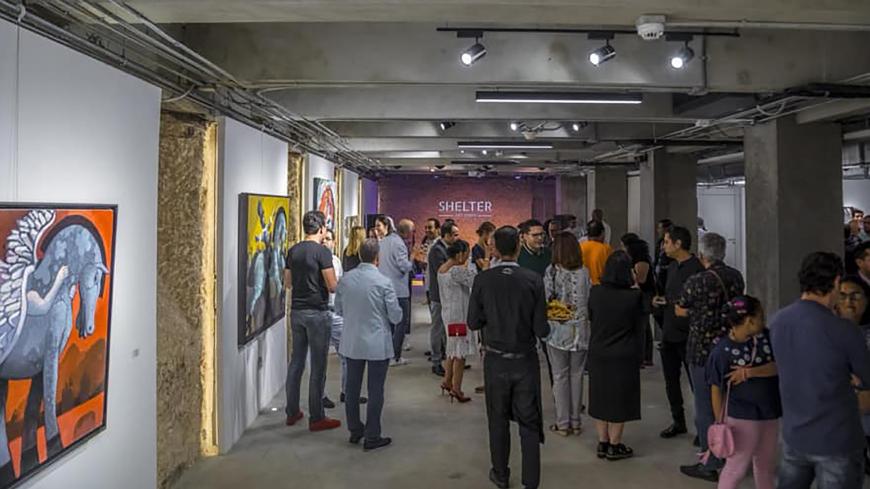 ALEXANDRIA, Egypt — An old underground bunker-turned-art space lies in Alexandria on Fouad Street, one of the oldest streets in the world dating back to 331 B.C. The street is characterized by many historical buildings with unique Greek and Italian architectural styles that allow visitors to travel back in time.

In one of the buildings on the street built by Greek architect P. Gripari in 1928, a staircase leads underground to Shelter Art Space, which was inaugurated in January last year as a space for artists to showcase their creations, hold music events or art workshops.

Shaima Ramzi, CEO of Shelter Art Space, told Al-Monitor that the space was originally built as a multiple-room cellar where residents would hide from the airstrikes that would hit the city during World War II.

Ramzi said the founders of Shelter Art Space, Mohamed Abdel Majeed, CEO of Sigma property management company, and Karim Mahmoud, head of Sigma's development sector, sought to breathe new life into a dilapidated basement found in the same building that is owned by their company.

The founders wanted the basement to be repurposed with a contemporary design that is in line with the history of the place. They were very careful to keep the basic characteristics of the basement as a reminder of the ancient history and events that took place within its walls, used as a hideout during World War II.

Sigma, which paid for the restoration of the basement, managed to preserve the architectural aspect of the cellar during the restoration of the columns and walls, starting with the vent ducts and escape corridors, so that visitors could get a feel for what the bomb shelter must have been like for those hiding there. The natural stone of the place and the arches were maintained.

The entrance to the cellar was designed with the same elegance as the main entrance to the building, which is more than 90 years old, in order for artists and visitors to recognize the visual value of the place.

The cellar had been closed since 1982, until Sigma decided to restore and rehabilitate it.

Malak Adham, a resident of the buildin, told Al-Monitor that Shelter Art Space "has become famous in the city of Alexandria.”

Zubaida Jamal, who was visiting the art space, expressed her admiration for the place and told Al-Monitor that it is like a time machine, and whoever enters it feels the life that people lived during World War II, when they hid from the raids. It continues to preserve its architectural character with its escape holes and metal staircase.

Ramzi said that the founders’ goal was to promote and revive closed heritage spaces to create alternative creative spaces, as they believe in the necessity of making those places available to the public and reuse them for projects that are compatible with cinemas, theaters and restaurants above ground.

Since its establishment in January 2020, Shelter Art Space has organized 38 different cultural events with the participation of about 60 male and female artists. A total of nearly 300 artworks have been exhibited at the space and more than 3,500 people have visited.

In addition to art exhibitions, Shelter Art Space hosts artistic meetings, workshops and cultural events in cooperation with local partners who are equally passionate about enriching the artistic scene in the city.

She said that Shelter Art Space cooperated with Bibliotheca Alexandrina and the French Cultural Center in Alexandria to hold art exhibitions, musical workshops and technical lectures.

Ramzi pointed out that the art space sometimes proposes artistic ideas, invites artists to offer their input and then holds art exhibitions that bring together a set of artworks.

“We are helping artists recreate past events and people in a contemporary way to later exhibit them at Shelter Art Space,” Ramzi added.

Prominent Egyptian artist Mohamed Abla organized an exhibition at Shelter Art Space for his works drawn during and after graduating from the Faculty of Arts at Alexandria University. The gallery also hosted famous plastics artist Evelyn Ashamallah, and an exhibition for US photographer Barry Everson. It also hosted a meeting between Egyptian artist Mohamed Jawhar and French artist Benoit Guillaume to talk about the architectural heritage of the city of Alexandria and discuss the book “History of Arab Graphic Design” by Haytham Nawar and Bahia Shehab.

Asked about the Alexandrian public’s reaction, Ramzi said that the visitors welcomed the idea of an artistic space in an ancient spot, which is a first of its kind in Alexandria, especially considering that the space provides support to young artists by providing a dynamic space for contemporary performing and visual arts and an interactive program that addresses a wide audience.