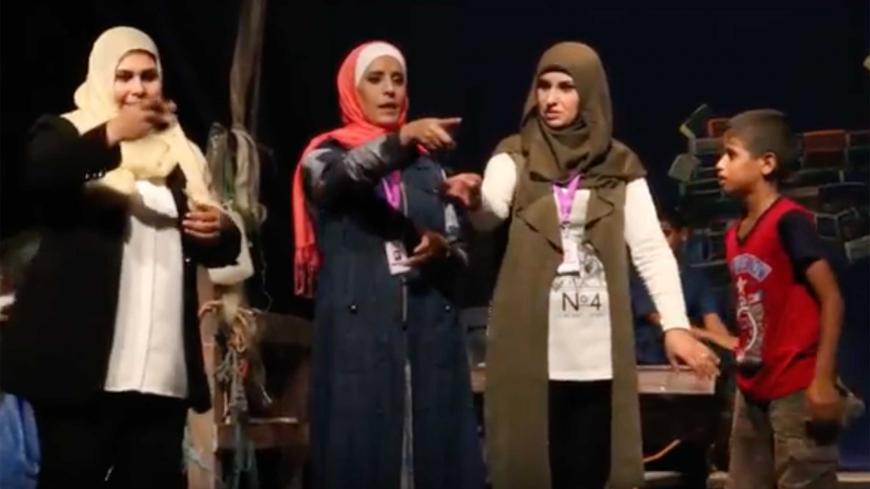 A scene from "Hashtag," a production by the theater troupe Bozour for Culture and Arts, is seen in a still from a video uploaded Oct. 23, 2017. - YouTube/KHALIL ALDABOUS

GAZA CITY, Gaza Strip — Three Palestinian women who came together last year to establish an all-female theater troupe have taken Gaza’s top issues such as immigration and family ties to the stage with a play called "Hashtag."

Wissam Dirawi, Alaa Salem and Manal Barakat founded Bozour for Culture and Arts ("bozour" is Arabic for seeds) on July 1, 2016. They brought to the project 15 years of experience in local theaters as well as training abroad in Poland, Egypt and Jerusalem. Dirawi is the director, Salem is responsible for the cartoons and animations programs, and Barakat is the scriptwriter and production designer.

The all-female drama group marks a first in Gaza’s male-dominated theater scene, where men and men’s issues dominate the stage. Social customs have long prevented Palestinian women from appearing alongside men in theatrical productions. In many plays, female roles are played by men.

Dirawi, the director of the group, told Al-Monitor that all the scriptwriting, directing, photography, decoration and lighting are performed by women.

"Hashtag" is a 45-minute drama with a cast of 13 children, including 10 boys and three girls aged 10-14. Dirawi told Al-Monitor, “It is the story of three children with big dreams. One of these children, Mouin, decides to run away to discover what lies behind the port of Gaza, toward Europe.” His path intersects with those of a fisherman and Abu Nawras, a guard at the port. At the end, Abu Nawras talks Mouin into staying in his homeland. Mouin realizes that his happiness lies in his homeland and with family and friends.

Dirawi said that "Hashtag" promotes values of stability, cooperation and unity and shows young people that immigration is not the only solution. “[The message] is to encourage them to stay in Gaza, despite the difficult economic and social conditions,” she said. Part of the play takes place at the seaport, a setting that is central to Gaza life.

She also stressed the need to employ creative means to promote the theater in Gaza, such as filming the play to be later screened online for a greater audience. “It is important to promote values through the language of art, which all members of society understand,” she added.

The play, which was written for an audience of children between the ages of 10 and 15, was performed for one consecutive month in several areas such as the Nuseirat Refugee Camp and onstage at the Saeed al-Mashhal Theater, near the Beach Refugee Camp.

“These areas are marginalized and in dire need of artistic and dramatic works to educate children and residents. It was also performed at 12 UNRWA-affiliated [UN Relief and Works Agency for Palestine Refugees in the Near East] schools,” Dirawi said. Members of the local theater industry also heavily attended the performances.

Dirawi explained that Bozour offers four programs — production, acting, animation and storytelling — conducting workshops during which participants discuss their experiences with other Palestinian women and encourage each other to write about them. “The aim is to turn the women’s issues into artistic pieces for the theater,” Dirawi said.

Speaking about the most important difficulties they face, Dirawi said, “We suffer from a lack of financial support. The majority of the plays are produced independently and with limited funding from some local NGOs [nongovernmental organizations]. We do not own a theater to present our works."

Ahlam al-Shaer, the director of theatrical affairs at the Ministry of Culture, told Al-Monitor, “The Ministry of Culture shows interest in all plays and supports performances in the Gaza Strip as long as they contain meaningful content, deal with topics of interest to Palestinian society and fall in line with its customs and traditions." She said the ministry is involved "from the minute the script is written until the performance ends.”

Shaer went on, “Palestinian society shows little interest in the different cultural arts, as people are more concerned about their living conditions in light of the rising poverty rates in Gaza." Society also often objects to public performances by girls. "This is why young men dress up as women and perform the roles themselves, thus respecting Gaza’s customs and traditions.”

She also stressed the Ministry of Culture has held seminars and workshops on how to write and produce theatrical works in Gaza.

According to the Palestinian Central Bureau of Statistics, in 2016 there were 14 theaters operating in Palestine overall, 11 of which are located in the West Bank and only three theaters in the Gaza Strip.

Meanwhile, Dirawi said that she hoped that theater will become more widespread in Gaza. “We also need to enhance the role of women, children and the youth through theater in terms of conveying their societal issues,” she said, adding, “We must establish a drama school to raise generations capable of creating artistic works so that theater in Gaza will become significant both at the local and the [regional] Arab levels.”