How real-life tragedies have revived theater in Gaza

Theater in the Gaza Strip has been revived in the past few months, as actors and directors worked hard to offer theater plays that reflect the difficult living and political conditions in Gaza. 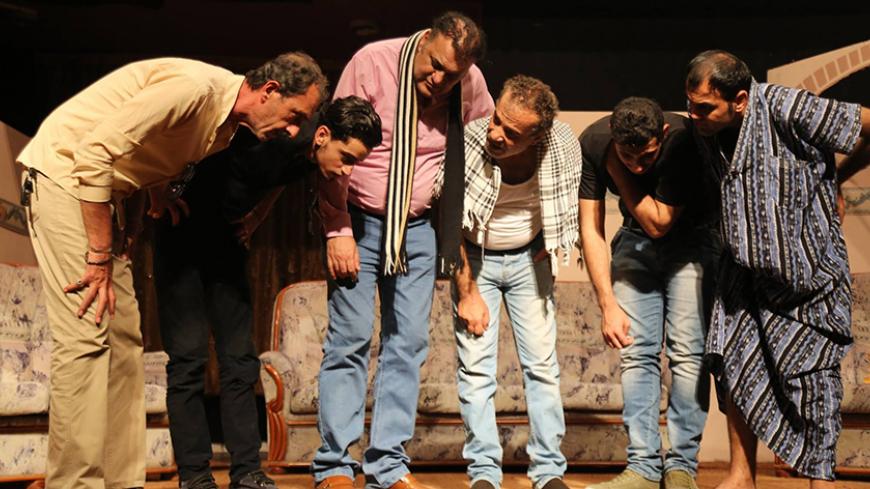 GAZA CITY, Gaza Strip — Palestinian theater has been witnessing remarkable activity after several local plays were performed in early 2016, the last of which was called “Akher al-Ankoud” ("Last Grape in the Cluster"). The play is about a young man in the Gaza Strip who develops deviant behavior due to unemployment and poverty and whose father refuses to abandon him.

Director Ali Abu Yassin told Al-Monitor that many people watched the play, which premiered on June 7 and was last performed on July 22, at the Said al-Mishal Establishment for Culture and Sciences (SAMECS) in Gaza City. “The turnout was quite high, although attendance was not free with one ticket costing 20 Israeli shekels [$5],” he said.

Theater in the Gaza Strip has been suffering since the Palestinian split in 2007, which negatively affected all aspects of life in Gaza, including theater, as people have been worried about their safety.

In this regard, Abu Yassin said that nine years after the Palestinian split, Gazans are back attending theatrical plays that reflect their daily social and political concerns in a comic way. He explained that theatrical activity has resurged thanks to good directing and to scripts that tackle interesting issues, such as unemployment and the effects of the split on Palestinian society.

“Palestinian theater never completely disappeared, but it has gone through highs and lows over the years. The activity of theatrical troupes performing successively in Gaza clearly sparked the interest of the audience,” he said. Abu Yassin noted that the success of theater depends on the spectators attending a performance.

Ashtar for Theater Productions and Training, which Abu Yassin manages, has performed recently several plays that address the social and political situation in Gaza, such as "Romeo and Juliet" on April 14 and "Akher al-Ankoud" on June 7.

Abu Yassin noted, “Theatrical work proliferates more in politically stable societies, but the Gaza Strip has stood out in this regard. Talented people have presented many artistic achievements in terms of novels, poetry and theater despite the ongoing Israeli blockade, the dire poverty and unemployment. They broke the condition of stability and luxury to produce art and proved to the world that suffering breeds creativity.”

He said that actors in Gaza live in poverty and their wages per paid theatrical work do not exceed $200; each performance is performed 10 times at most. He added that the Gaza Strip lacks theaters and libraries and needs a higher institute for theatrical art.

“The Palestinian government does not currently offer Palestinian theater in Gaza any financial support. All of the theaters' successes stem from personal initiatives and modest support from nongovernmental organizations,” Abu Yassin noted.

Actor and director Akram Obeid started working in the field in 1985, when he was only 17. He told Al-Monitor that funding has always been a spoke in the wheel of Palestinian theater, which has been relying on the personal efforts of active theatrical troupes. He noted in this regard, “As actors from Gaza, we would search for graduates who studied the profession abroad and returned to the Gaza Strip after the Palestinian Authority [PA] took control in 1994, to receive training from them. [Actor and director] Khalil Tafish and [producer] Hussein al-Asmar were among these professionals.”

The Palestinian News and Information Agency (WAFA) revealed in a report that the reasons theatrical plays have, since the 1980s, relied on amateurs alone is due to the lack of professors teaching theater, the lack of art institutes and the absence of foreign theatrical groups. However, when the PA took the reins of Gaza in 1994, it offered financial support through the Ministry of Culture to theaters, and thus alleviated the logistic and financial obstacles performers faced in Gaza, and facilitated their travel to study theater abroad.

Based on his 31-year experience in theater and television, Obeid said that Palestinian theater lacks funding and support and that theatrical plays are mostly performed through personal efforts exerted by directors and actors. He stressed that the recent activity theater has been witnessing in Gaza is due to the presence of experienced actors and academics who teach theater, as well as good stories that have helped revive theater.

Obeid said that after Hamas took control of the official state television in the wake of the Palestinian division in 2007, TV productions would only focus on problems caused by Israel. As a result, the first generation of actors in Gaza resorted to theater once again, as theater was a means to send out political and social messages about the daily problems Gazans faced.

According to Obeid, the main obstacles facing theatrical work in the Gaza Strip include “the lack of funding and financial support. Consequently, theater work has declined in the past few years. Moreover, actors and theatrical troupes do not have travel opportunities to participate in Arab and international festivals due to the closing of the Rafah crossing.”

Theatrical work in Palestine reached its peak after the PA took over the administration of Gaza in 1994, as Obeid and his fellow actors were able to present many plays such as "Ibriq al-Zayt" ("The Oil Pot") that was performed during the Global Forum for Arab theater in Cairo in 1994.

Atef Askoul, the director general of the Arts and Creativity Department at the Palestinian Ministry of Culture in Gaza, told Al-Monitor that his ministry’s budget is almost nil and therefore cannot support theatrical work in Gaza. In fact, it can barely offer limited support to troupes participating in national occasions such as the annual commemoration of Nakba Day.

“The Ministry of Culture is trying to eliminate obstacles facing theatrical troupes in the Gaza Strip such as granting them permits for their performances, honoring actors and solving logistics problems that theater employees face in Gaza,” he said. He added that due to the absence of specialized art schools and institutes that aim to promote talent and skills of theatrical actors, some performances are not up to the level required. He also said that the amount of theatrical works has suffered amid the lack of professional directors and theatrical scriptwriters.

Askoul praised the positive reactions of the audience in Gaza to the theatrical performances of some troupes such as Bayader, which performed "Akher al-Ankoud." He noted that spectators in Gaza long for their social and political issues to be made public, in a style that is either comic or tragic.

Lina al-Tawil, a citizen who attends Palestinian theater performances in Gaza and who watched "Akher al-Ankoud," told Al-Monitor, “The play was beautiful in every sense, whether the idea, the performance of actors or the audience’s interaction. It is nice to tackle social issues in Gaza in a comic, heartfelt way.”

Tawil said that she watched the performance on its third day, and even then it was a full house.

As theater performances have the ability to alleviate the burden of the political and social problems that Gazans face, it is important that these performances continue to be accessible in Gazan society.