Erdogan seems unhappy with system he created in his image

It's unclear whether Turkey's government respects the rule of law, even though the administration has redesigned many of the laws to suit itself. 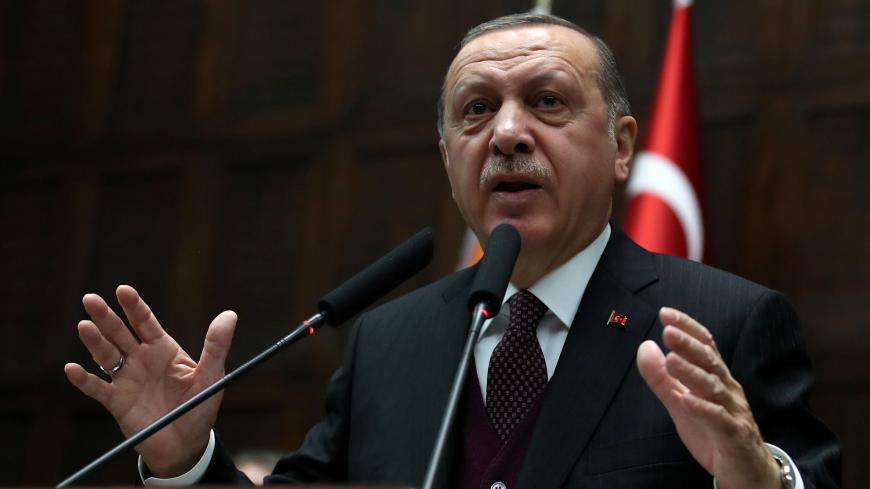 Turkish President Recep Tayyip Erdogan addresses members of parliament from his ruling AKP during a meeting at the Turkish parliament in Ankara, Turkey, Jan. 9, 2018. - REUTERS/Umit Bektas

Justice is a word frequently used in Islamist parties’ names. In Turkey, it's also part of the ruling party's name: the Justice and Development Party (AKP). The promising and iconic name helped the party capitalize on Turks' two deepest concerns in the early 2000s. Yet, even though his party has been in power for 17 years, Turkish President Recep Tayyip Erdogan’s quest for "justice" hasn't stopped. For example, Erdogan regularly complains about how his children faced difficulties because they attended religion-based schools, which have a lower college acceptance rate than other schools.

After the July 2016 coup attempt, international and local observers expressed their concerns about the loss of judicial independence. Erdogan's administration frequently ridiculed them.

However, Erdogan openly and loudly still plays the victim demanding justice. For instance, Erdogan said in October, “I am looking for justice as well; it doesn’t exist,” while criticizing US President Donald Trump and the West for their treatment of Muslims. On Jan. 10 he was quoted as saying, “Delayed justice is not justice.” He congratulated the authorities who, on his direction, purged more than 4,000 judges allegedly associated with outlawed cleric Fethullah Gulen.

On March 6, during a ceremony marking the 150th anniversary of Turkey's Supreme Court of Appeals, Erdogan uttered a sentence you would expect to hear from an opposition leader, not a man destined for an imperial presidency. He said, "If people in a country are opening their hands to the skies in desperation, screaming for justice, there is a problem with the legal system." If judges failed to meet his definition of justice, he labeled them "zalim" (cruel) — a potent concept from the Quran meaning they practiced unjust acts of wrongdoing, maltreatment, exploitation and oppression. He didn't stop there: “When we lose justice, we must know we will lose everything else. We value the supremacy of law.”

Despite intense purges and security checks under emergency law, which has been in place for 20 months, judges and prosecutors are still being investigated and suspended. Some 50% of the current judges have been on the bench less than three years. On March 19, newly appointed judges feverishly cheered during an Erdogan speech, generating strong doubts about the possibility of their independence.

The judicial system in Turkey, as Erdogan rightly put it March 6, makes people pray for justice from a higher authority. Yet, given that Erdogan and his party have been ruling Turkey for 17 years, shouldn't Erdogan be content by now with the existing system? In other words, does Erdogan uphold his own rules? To put it in perspective, when Turkey's highest court approved the release of two journalists in February 2016, it was Erdogan who said, “I don't respect the decision of the Constitutional Court."

And it's not just Erdogan’s words. Some judicial decisions are quite controversial and their legal justifications are murky, to say the least. For example, in mid-February, news broke that gendarmerie and police special forces would be joining the Turkish Armed Forces (TSK) and Free Syrian Army fighting in Afrin. In early March, both Turkish and international news outlets were busy analyzing the reasons for the deployments. They focused on the military stages of war, particularly the possibility of urban warfare.

Yet the legal justification of their deployment is unclear. Al-Monitor asked legal experts, constitutional law scholars and political activists, who shared their assessments.

First, the gendarmerie and police special forces, as well as volunteer village guards, were all formed for domestic security. All three formations regularly operated under the Interior Ministry, but were transferred to the TSK's control for the Afrin offensive.

But how can these forces be deployed to a foreign land without any formal agreements?

Constitutional scholars, none of whom were willing to talk on the record, told Al-Monitor they could see no legal justification for the deployment. Only a few critical media networks were able to question this troubled legal situation on TV.

Ayhan Bilgen, spokesperson for the opposition People’s Democratic Party (HDP), agreed that the deployment of gendarmerie and police to foreign countries requires special legal arrangements. "This operation entails serious risks for both Turkish and international law," he told Al-Monitor. Though the action might not be receiving much attention today because of the war, it might become an issue later, he added.

Meral Danis Bestas, a lawyer and HDP lawmaker, was clear in her reply to Al-Monitor: "There is no legal explanation of how [the special forces] can be deployed abroad.” She added, “Their transfer from one town to another [even] domestically requires special permission." The village guards' deployment abroad also lacks precedence.

A constitutional law professor told Al-Monitor: “There are so many new rules and regulations [imposed] as emergency decrees, with several loopholes, that it's become a horrible patchwork that no one can keep track of." The move transferring the gendarmerie to the TSK is legitimate, "but I know of no regulation [permitting] their deployment abroad, or any rules of engagement. Let’s hope there are some laws and the government will inform us.”

However, if we were to assume there are no legal justifications for such deployment, how should we read the current situation? The scholar said, “Indeed, my talks with AKP members suggest that these forces have no official identity out of the borders of Turkey. Now here, either Erdogan has forgotten the existing laws, which have been revised multiple times, or he simply doesn't care about legal ramifications." Another issue being openly questioned in Ankara is the legitimacy of Turkish administrative units, such as banking and postal services, in Syrian cities like Jarablus.

So, it seems that even with an emergency decree, Erdogan's increasing hold on power and the AKP being in charge for 17 years, there's no guarantee laws will be upheld. To the contrary, authoritarian systems are prone to breaching their own laws, even the ones they designed, simply because they can do so with little to no oversight or accountability. In times of crisis, such as war, and with a prolonged emergency law, there are no holds barred.

That's why in Turkish news we read Onion-like headlines about a piano being taken into custody or mules being released on probation under barn arrest. So it appears Erdogan is right after all: Most people in Turkey have no other option but to open their hands to the heavens and pray for a miracle in the justice system.