Why Erdogan called for updating Islam

Misogyny in the name of Islam proved shocking to Turkey’s secularists, but it also was disturbing to most moderate religious conservatives, many of whom vote for President Recep Tayyip Erdogan. 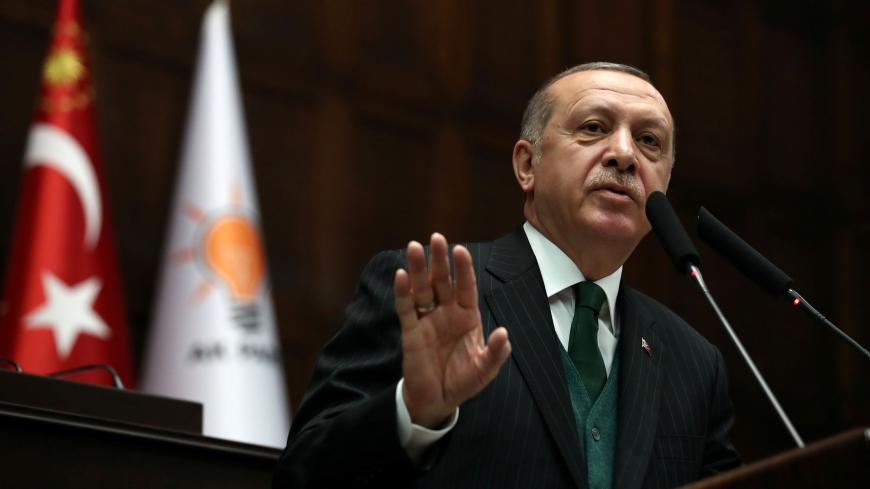 Turkish President Recep Tayyip Erdogan addresses members of parliament from his ruling Justice and Development Party during a meeting at the Turkish parliament in Ankara, Turkey, March 6, 2018. - REUTERS/Umit Bektas

Public remarks by Turkey’s powerful President Recep Tayyip Erdogan have often raised eyebrows in the West in recent years. However, in a March 8 speech on International Women's Day, Erdogan broke this pattern and said something that could only be music to liberal ears: He condemned misogynist clerics who degrade women, and even said, “Islam must be updated."

The speech was made to hundreds of Turkish women from various walks of life who were invited to the presidential complex in Ankara for International Women's Day. In his address to the women, Erdogan implicitly referred to a few ultraconservative scholars in Turkey who recently outraged society by defending misogynist practices such as wife beating. "Recently, some people claiming to be clerics issued statements contradicting religion,” Erdogan said. “They have no place in our times. They don't realize how Islam needs to be updated and is updated accordingly. You can't apply the practices applied 15 centuries ago today. Islam changes and adapts to the conditions of different ages. This is the beauty of Islam.”

This progressive take on religion, especially the very suggestion that “Islam needs to be updated,” came as a cold shower to some of the typically pro-Erdogan commentators. On social media, many of them stood silent, whereas others offered mild criticism, repeating the usual mantra that “Islam is perfect,” it needs no “update” and it is only Muslims who need to improve themselves by living up to Islam’s fixed commandments.

A day later, Erdogan refined his initial remark about updating Islam and said he seeks no "reform in religion.” ("Reform” is a dirty word in conservative parlance.) “Our holy Quran has and will always have words to say, its commandments will never change,” Erdogan affirmed. However, he added, “The independent reasoning derived from the Quran” — in other words many clauses in classic jurisprudence would “surely change according to the time, the conditions and the possibilities.”

Why has Erdogan taken this not-so-conservative position on Islam? And what does it mean for the state of affairs in Turkey?

First, we need to recall the background of Erdogan’s remarks. In the past few years, Turkey’s religious conservatives have found a level of free speech that they have not seen in a century. While free speech overall has dramatically declined in Turkey, as noted by Freedom House, this decline has affected only the anti-Erdogan camp. While secularists in the state, media and civil society have been largely swept aside, the vacuum was filled by religious conservatives and Islamists of various kinds, who now both had the self-confidence to speak their minds, and also influential media forums to use such as state TV.

Some of these newly empowered conservatives were people with deeply archaic understandings of Islam. As a result, it became common for Turks to hear one dreadful “fatwa” (religious opinion) after another. One scholar suggested that pregnant women should not freely walk around, for example, while another threatened “women who wear pants” with hellfire.

Most recently, Nurettin Yildiz, a traditional scholar and a columnist for the Islamist Milli Gazete, sparked even more outrage by declaring that it is permissible in Islam for children of the age of 6 to get married. He defended wife beating as well, even suggesting that women who are beaten by their husbands should be “grateful” for this blessing.

Here is the key point: These terrible views were shocking to Turkey’s secularists, almost all of whom are against Erdogan. But they were also shocking to most moderate religious conservatives, many of whom vote for Erdogan.

This is the case, because as polls show, hard-core Islamists who would like to see a Sharia-based Turkey — one like Saudi Arabia, where sexes are segregated and adulterers are stoned — make up a small minority in Turkey. As Pew Research polls have shown, those Turks who wish to see Sharia as “the law of the land” make up some 12% of the whole population, whereas the same number is 84% in Pakistan and 74% in Egypt. To the question of whether sons and daughters should have equal inheritance rights, an impressive 88% of Turks say “yes,” where the same number is only 53% in Pakistan and 26% in Egypt.

In other words, Turkey’s 150-year-long Westernization that goes back to the late Ottoman Empire, and the century-long experience of the secular republic, has ingrained certain modern values in society, even in the more conservative camp.

No wonder Yildiz’s shocking statements on wife beating and child marriage have been strongly criticized by commentators in the conservative, and pro-Erdogan, media as well — in newspapers such as Sabah or Yeni Safak. Most recently, Devlet Bahceli, the leader of the Nationalist Action Party and a key Erdogan ally, slammed Yildiz as a “pervert” for saying men and women should not get on the same elevator.

Erdogan’s reaction to “clerics who degrade women” should be seen in light of this social context. It should also remind us that Erdogan, at the end of the day, is a populist politician and not a doctrinaire cleric. He follows social trends carefully, with regular polls he reportedly gets conducted, and does his best to capture the zeitgeist. No wonder his political narrative is based on not a rigid Islamism that would have limited appeal, but an Islam-infused nationalism that appeals to the majority of Turkish society. (The main political trait in Turkish society has always been nationalism more than anything else.)

Whatever his political reasons are, Erdogan’s support for the idea that “Islam needs updating” will come as a breath of fresh air for Turkey’s modernist theologians, who have lately been concerned with the rise of the ultraconservative scholars, some of whom also have been called "Salafi.” In a country where the president’s words are definitive almost on everything, Erdogan’s green light for new interpretations of Islam will be helpful.

However, there is also a downside: the very definitiveness of the president — and, by extension, the state — over religion. Turkey has always been a very statist country where the government has controlled religion and has left very little room for civil society. Erdogan’s attempt to define “the right Islam” will only deepen this state-centric culture.

A modernist theologian laid this out well in a newspaper column. The main problem in Turkey's religious sphere, the theologian said, is that “different groups are willing to have their own interpretation of religion embraced by the state, and imposed on society.” And there is little hope, he added, that this vicious cycle will be broken in the near future.