Erdogan calls for mobilization of army reserves in Syria

Turkish President Recep Tayyip Erdogan’s growing advocacy of nationalism and war has triggered a new debate in the country, with the opposition calling for sending 800,000 Syrian males in Turkey to fight in Syria before mobilizing Turkish army reserves. 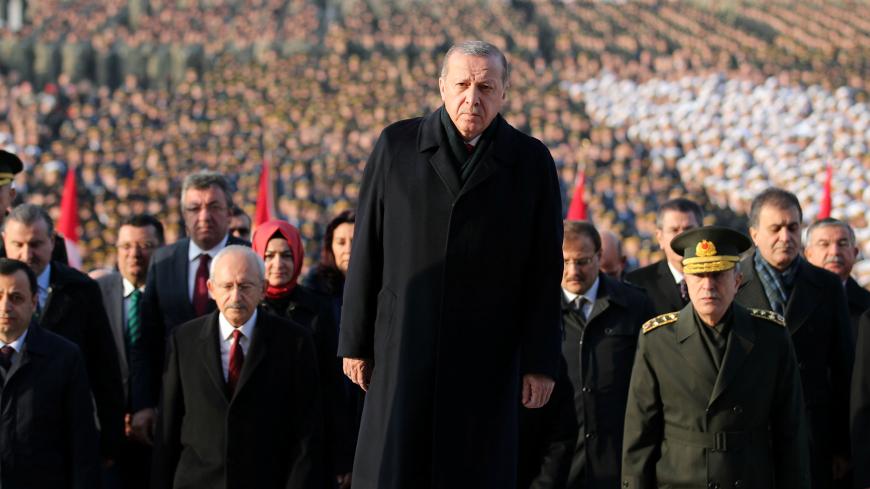 In his recent speeches at Justice and Development Party (AKP) meetings, President Recep Tayyip Erdogan appears to be more chauvinistic than ever with frequent impassioned references to war sagas. With the battles at Afrin, the dose of his nationalistic and martyrdom utterances has increased, so much so that on Feb. 24 at a party meeting in Kahramanmaras he called on Turkish men who have already served in the army to be ready to go to Syria.

Addressing his supporters who were chanting, “Our leader, take us to Afrin,” Erdogan said, “Don’t worry. Once we decide to go we will not leave you behind, but take you with us. Now we are dispatching our trained cadres. Those who received mobilization orders should get ready. But at this moment we don’t need them. The minute we decide we will hit the road.”

Turkish males are subject to conscription when they reach the age of 20, and they are required to mobilize until the age of 41.

Following Erdogan’s remarks that those who have received mobilization orders should be ready, millions visited the official website of the Ministry of Defense to find out if their name is on the list. Due to the heavy traffic the site went down quickly.

Devlet Bahceli, the chairman of the opposition Nationalist Movement Party (MHP), which has decided to enter into an elections alliance with the AKP and to support Erdogan, answered the president’s call by saying, “We are ready for mobilization. It is time to hoist the Turkish flag over Afrin.” Prime Minister Binali Yildirim got into the mood by dressing up in military attire at a meeting of the AKP's youth wing in Kocaeli.

The spirit of nationalism and shouts of war do not spare small children either. Erdogan’s photo shoot with children wearing military outfits at an AKP meeting and his calling a little girl dressed in a military commando uniform to the stage prompted bitter reactions, even though he had tried to console the crying girl.

Sezai Temelli, the co-chair of the pro-Kurdish Peoples' Democratic Party, said this was but an attempt to militarize society by making children wear military uniforms. He said children are being primed for death and martyrdom, adding, “We are engaged in politics to create a safe society for our children while others are ready to send those little children to the front line.”

Erdogan Toprak, the deputy chairman of the main opposition Republican People's Party, said that instead of mobilizing Turkish citizens to fight in Syria, first the Syrian men in Turkey should be called on. Toprak said there are more than 800,000 Syrian males in Turkey between the ages of 18 and 41.

“We are supporting Operation Olive Branch for the security of our country and our borders. While our soldiers are fighting terror organizations in Afrin, Jarablus and Idlib, millions of Syrians live in security of the camps and our cities, working, having fun and even starting businesses. To defend Syria above all is the national obligation of Syrians born there, who know the geography and grew up there. Syria belongs to the Syrians,” he said. “To those who opt to preserve their lives and property by escaping to other countries instead of staying and defending their own country, we can only say: Go defend your land. To exploit national sentiments in domestic politics by dressing children in military uniforms and making them cry by asking 'Are you ready for martyrdom?' is nothing but exploiting national sentiments and is unacceptable.”

Another name opposing the parading of children in military uniforms at AKP meetings is Kerem Altiparmak, a human rights legal expert and lecturer in the faculty of political sciences at Ankara University. Referring to the UN Declaration of the Rights of the Child, he wrote on Twitter, “According to Article 3 of the Children’s Rights Declaration, all state bodies must give priority to the rights of children in all activities concerning children. This principle cannot be ignored for any reason, including national interests.”

Serdar Degirmencioglu, visiting lecturer at Universite Libre de Bruxelles, was quoting as saying by Turkey's independent media outlet Bianet that one of the objectives of the last 15 years of AKP rule has been to raise new generations glorifying martyrdom, by naming schools, parks and even kindergartens after martyrs — people who have died for their country or for a cause. He said as if that wasn’t enough, 4- and 5-year-olds are made to enact martyrdom in battles at school. In Turkey's mainly Kurdish province of Diyarbakir, six children who were killed in a fire in their Quran seminary in December 2015 were declared martyrs. The goal is to have Turkish children accept war and death as a duty, as their destiny and even as an objective.”

When the debate that started with Erdogan’s call for the mobilization of Turkish men became a major controversy, Deputy Prime Minister Bekir Bozdag was forced to clarify that those who have received their mobilization papers do not yet need to report to their units. While the military operation in Syria is used to infuse stronger sentiments of nationalism in domestic politics, the latest report of the International Crisis Group warns of growing public opposition and virulent reactions targeting Syrians in Turkey.

The International Crisis Group report, titled “Turkey’s Syrian Refugees: Defusing Metropolitan Tensions,” says 78% of poll respondents believe Syrians have made the country less safe, while 75% believe they can’t live in peace with Syrians. Last year, clashes, tensions and other criminal incidents between Syrian refugees and Turkish citizens increased threefold compared to the year before; 35 people, 24 of them Syrians, have died in those incidents. The report notes that many incidents with Syrians are not reported by the mainstream media as the parties to the clashes usually refrain from going to the police.

Ethnic tensions between Syrian refugees and Turks is rising due to the high unemployment rate and unregistered Syrian workers. Many Turkish businessmen of Kurdish origin in the southeast prefer to employ Syrian Turkmens instead of Turkish citizens of Kurdish descent, increasing ethnic conflict.

The government’s national mobilization for Syria on pretexts of combating terror and ensuring border security contribute to increasing negative sentiments of the Turkish public toward Syrians. The government seems to be aware of this trend. No wonder officials now talk of settling some of the Syrians in Afrin.

But Erdogan and his new election ally, the MHP, want to keep the winds of nationalism blowing until the 2019 elections. Today, with war and nationalistic feelings on the rise, there is not much reference to the increasingly deteriorating economic situation of the country. But negative economic trends may well force people to ignore nationalist currents and seek snap elections.