Erdogan’s hard-line nationalist and anti-Western rhetoric has become more unrelenting ahead of Turkey’s general elections, but electoral concerns are not the sole reason behind the escalation. 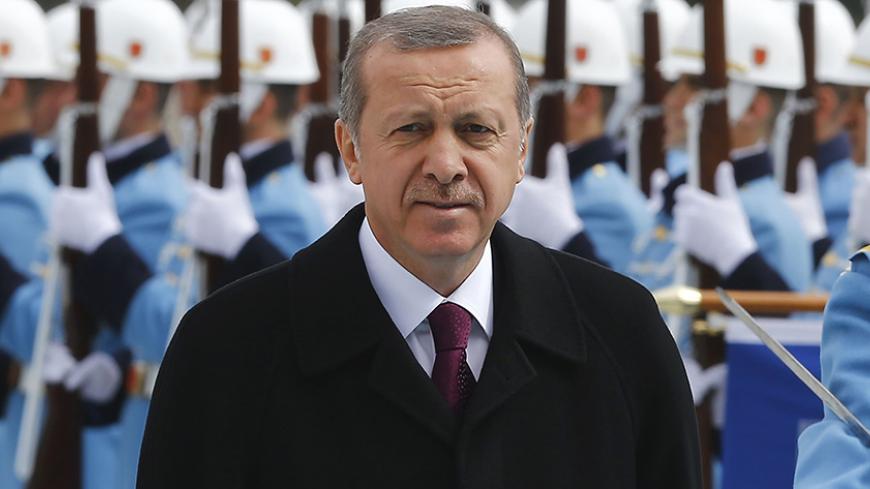 Turkish President Recep Tayyip Erdogan’s recent speeches and media remarks have been marked by an increasingly radical rhetoric. Among mainstream political leaders in Turkey today, Erdogan is by far and away the most hard-line and polarizing orator.

Radical anti-Western antagonism and paranoia, based on an extremist melange of Turkish nationalism and Islamism, have increasingly infused his speeches. The most striking example of this troubling metamorphosis was the speech he made during a ceremony held March 16 in the presidential palace to award “state honor medals” to army veterans and families of fallen soldiers.

“These lands remain our home because every singly citizen of this 78 million-strong country — men and women alike, even the children and the elderly — see martyrdom as an honor when necessary. Otherwise, we wouldn’t have been allowed to stay a single day here,” he said.

Erdogan went on to say, “We have to keep toiling with this awareness, always ready for one of the two beautiful [eventualities], and take measures accordingly.” What he meant by two “beautiful” eventualities was becoming a “martyr” or “ghazi.” In the Islamic sense, a martyr is someone who sacrifices his life in the name of Allah, while “ghazi” is a title honoring fighters who have survived a war in the name of Allah. In contemporary Turkish culture, the “martyr” and “ghazi” terms are generally used to denote fighters who get killed or injured while defending the motherland.

Following this belligerent message, Erdogan said, “Those who want to turn Turkey into another Andalusia, another Middle East and Eastern Africa, those who want to make Turkey meet the fate of Eastern Europe and the Balkans, have never abandoned their intentions.”

To speak of the existence of “those who want to turn Turkey into another Andalusia” reflects a state of morbid paranoia. Erdogan refers to Andalusia in 1492, meaning that certain forces exist today who want to similarly purge Muslims from Turkey or force them to convert. It is a suspicion impossible to back up with tangible evidence. Yet, a front-page headline in the Islamist Yeni Safak the following day read, “Turkey will not become another Andalusia.” The leftist BirGun daily, for its part, said Erdogan’s remarks amounted to “a call for jihad.”

In the same speech, Erdogan blended pan-Islamism and Turkish nationalism on the basis of anti-Western antagonism, saying, “The ‘Turk’ denotes an ethnicity only in our country. In Western eyes, all Muslims have been ‘Turks’ throughout history, or described so. … This reflects also the responsibility that history has placed on our nation.”

The concept of a “Turkish-Islamic synthesis,” which claims to blend Turkish nationalism and Islamism, was the official ideology of the Sept. 12, 1980, coup in Turkey. The rightist ideologues of the time could have seen the blending of the two ideologies as a way to secure national unity on as broad a base as possible.

Erdogan’s hard-line rightist and Islamist-nationalist rhetoric, meanwhile, could be explained with the objectives he has for the June 7 general elections. He is calling for a presidential system for Turkey, which requires a new constitution.

Under the current constitution, a constitutional overhaul needs to be approved by a three-fifth parliamentary majority before it can go to a referendum. This means at least 330 members in the 550-seat parliament. Hence, Erdogan wants the Justice and Development Party (AKP) to clinch at least 330 seats so that his coveted new constitution gets parliamentary approval with no need of support from other parties, even though Erdogan is no longer the AKP’s chairman nor even its member under the current constitution, which requires him to be a neutral president.

Several opinion polls, however, indicate that a certain number of AKP voters have been switching to the Nationalist Action Party (MHP), and that the predominantly Kurdish People's Democracy Party (HDP) is poised to overcome the 10% national threshold to enter parliament. If those polls are to be believed, an extreme nationalism that outstrips even the MHP seems to be Erdogan’s way of trying to lure back the votes headed to Turkey’s main nationalist party.

Just a day before he spoke of “those who want to make Turkey another Andalusia,” Erdogan denied the existence of a Kurdish problem in Turkey. “What Kurdish problem? There is nothing like this anymore,” he said, sending out a message to the nationalist bases of the AKP and the MHP.

Yet, the impact of Erdogan’s anti-Western and hard-line nationalist rhetoric should not be seen as confined to the electoral context. His messages, after all, reach the widest of popular masses through the means of mass communication, and Turkey’s political culture is changing in line with his radical ideological tone.

The radicalization of Erdogan’s rhetoric is neither something new nor can it be explained with the elections only. This trend, rising in parallel with an increasingly authoritarian regime, became visible and persistent after the 2011 elections, which the AKP won with 50% of the vote. The trend gained a strong momentum and built up with the Gezi Park protests and corruption investigations in 2013. Now, ahead of the June 7 polls, it is escalating further and contributing to the radicalization of Turkish Islamists.