Now that Baghdad has lifted the ban on international travel to the Iraqi Kurdistan region, experts say the Turkish government needs to resume mutual flights as soon as possible. 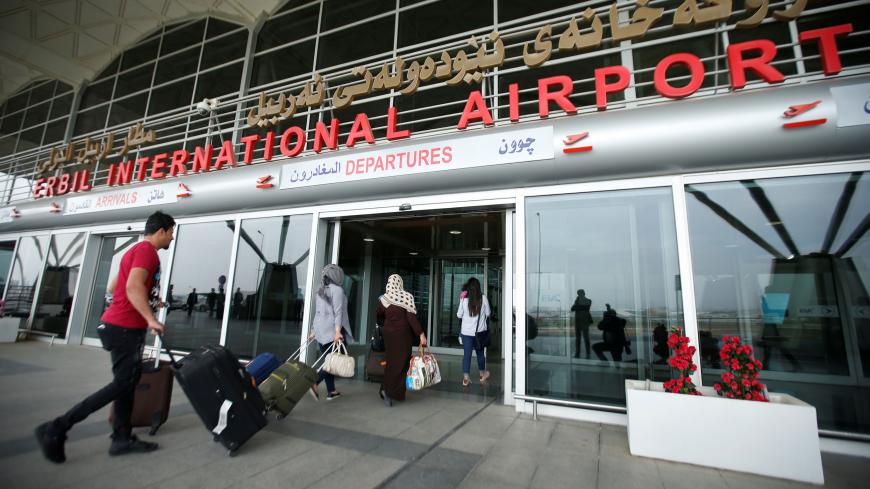 People arrive at Erbil International Airport in Erbil, Iraqi Kurdistan, March 15, 2018. While the airport was allowed to have domestic flights following a controversy over last year's Kurdish independence referendum, regular international flights had been suspended until this week. - REUTERS/Azad Lashkari

DIYARBAKIR, Turkey — Regular international flights to and from Iraq's semi-autonomous Kurdistan region resumed this week after six months, much to the relief of foreign investors looking to grab a share of the reconstruction business there since Mosul 's liberation from the Islamic State (IS).

While flights to and from Saudi Arabia were allowed during the ban, to facilitate Muslim passengers traveling on hajj, all other air traffic had been grounded.

A flight March 19 from Dubai to Erbil was the first non-hajj-related international traffic the area has seen since the central government in Baghdad tightened its grip on the Kurdistan Regional Government (KRG) following the latter's independence referendum Sept. 25.

Iraqi Kurdistan is landlocked, surrounded by Turkey, Syria, Iran and other parts of Iraq. The airports at Erbil and Sulaimaniyah served as the KRG's economic and political lifelines. The KRG administration and many foreign countries applauded news of the airports' reopenings, as did much of Turkey's business world.

Among the would-be investors are dozens from Turkey who are anxious to establish new contacts — and contracts. It seems hard to believe in the 21st century, but these businesspeople were unable to reach the neighboring region as travel by road remains risky.

Iraqi Kurdistan has been a major market for Turkey's business sector for decades. It has provided employment for thousands of citizens in Turkey's economically deprived and conflict-ridden southeast border with Iraqi Kurdistan.

Iraq is the second-biggest export market for Turkey (estimated at $7.5 billion in 2016), with most Turkish goods going to Iraqi Kurdistan. Turkey is the KRG’s largest economic partner.

According to Burc Baysal, head of the Diyarbakir Industrialists' and Businessmen's Association (DISIAD), the construction sector will profit the most from the resumed flights.

“Most of the subcontractors working in the construction sector in Iraqi Kurdistan are from Turkey. Traveling has been extremely difficult for them because of the ban,” he told Al-Monitor. The ban was also a “huge blow” to almost every sector, Baysal added.

Although goods can be exported by roads, businesspeople need air travel to oversee work and establish new contacts. Businesspeople refrain from shipping goods to places they can't reach in person, Baysal said.

Ferda Cemiloglu, president of the East and Southeast Businesswomen's Association in Diyarbakir, was born and raised in Turkey. She runs the association from the Iraqi Kurdistan region, where she has lived almost 15 years.

She believes the timing of the airport decision will be advantageous for both sides; she agreed with Baysal that now that Mosul is ready for reconstruction, Turkish construction companies stand to benefit the most.

“Airports are one of the most important lifelines of Iraqi Kurdistan. In the good old days, many people across the world used to come and see Kurdistan out of curiosity,” Cemiloglu told Al-Monitor. “Life in Baghdad lags far behind Kurdistan in services and lifestyles." Now that the airports have reopened, "There will be much activity … and we will return to the good old days.”

The closest Turkish province to Iraqi Kurdistan region is the southeastern border province of Sirnak. Travel by road from Sirnak city to Erbil (85 miles or 137 kilometers) usually takes five to seven hours because of congested customs crossings and checkpoints. Yet it's only about a two-hour trip from Erbil across all of Turkey to Istanbul (1,155 miles) via plane.

Before the ban, there were four direct flights weekly from Istanbul and various Turkish provinces to the Erbil and Sulaimaniyah airports. It’s not clear when Ankara will resume the mutual flights, but DISIAD's Baysal warns of “possible further financial losses” if resumption takes too long.

“Turkish businessmen will lose their customers to other countries due to the lack of dialogue and easy transportation. The Turkish government shouldn’t allow this to happen,” he said.