Iranian sculptor's desire for artistic freedom takes him across region

Iranian Kurdish sculptor Seywan Saeedian's life takes him across borders in a conflict-torn region, where artistic independence often comes at a steep price. 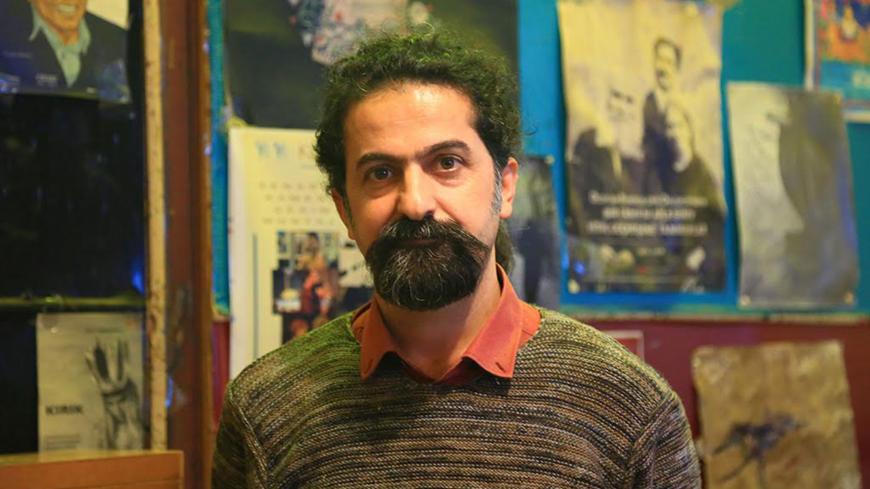 DIYARBAKIR, Turkey — At an award ceremony in Iran two decades ago, Iranian Kurdish sculptor Seywan Saeedian had the audacity to criticize the regime, setting in motion the events that would force him into a nomadic life in a turbulent region, where arts often go hand in hand with war, politics and dissent.

For the past four years, the 47-year-old has lived in Diyarbakir, the largest city of Turkey’s mainly Kurdish southeast, where his hallmark sculptures of scrap metal adorn several public spaces.

Born in Mahabad, which was the seat of a short-lived Kurdish republic in 1946, Saeedian grew up in a large family with nine siblings. In an interview with Al-Monitor, he described himself as “a child of war and migration,” recounting how tribal rifts and economic woes displaced the family twice in his childhood. The events that left the deepest marks on him, however, were the 1979 Islamic Revolution and the Kurdish peshmerga battles with the Iranian regime.

Saeedian’s attraction to arts began through calligraphy, which his elder brother practiced. As he became aware of his own talent, he went to Sanandaj, the capital of Iran’s Kurdistan province, to take classes with prominent artists, while working a manual job at a brick factory to make ends meet.

From there, Saeedian went to Tehran, determined to establish himself on the artistic scene. Soon he began to exhibit his works, but still struggled with poverty, including a period in which he was so broke he had to sleep in a city park. For the sculptor, artistic acclaim came with scrutiny from the regime because of his political dissidence. Still, in 1999, he became one of the recipients of awards the government gave to the most outstanding artists of the year.

The award ceremony became a turning point in Saeedian’s life. He told Al-Monitor, "In Iran, the ministry in charge of culture and arts is called the Ministry of [Culture and] Islamic Guidance. A mullah [official] from Tehran spoke at the award ceremony. I took the floor and said, 'Your [ministry’s] name is an insult to artists. How can you possibly [guide] artists? Artists are the ones who guide and enlighten society.' I did not wait for his answer, which would have made no sense anyway. I knew what he would say. I took the award and left the hall. This was something that required courage.”

The following day, the sculptor was summoned to the ministry for a talk. The message, he said, was, “You are young and talented but we can swallow you up in a gulp.” Threats from Iranian intelligence followed, coupled with admonitions from the sculptor’s own kith and kin. In 2001, he fled Iran. Because of security concerns, he still refuses to disclose where he went.

In 2004, Saeedian resurfaced in Sulaimaniyah, Iraqi Kurdistan. A group of local artists lobbied to stop his extradition after the authorities detained him for entering the region illegally. With only $10 in his pocket, he started building a new life. While attending the academy of fine arts in the city, he reunited with his girlfriend, Ronak Rasulpur, who joined him in Sulaimaniyah as a student of graphic arts. The couple married in 2007 and moved to Erbil, the capital of Iraqi Kurdistan, where Rasulpur worked as a graphic designer while Saeedian continued to sculpt, in addition to ventures in interior design and filmmaking.

The couple prospered, but life in Iraq was not to their taste. In 2014, they were ready to move, yet Saeedian did not have a passport. He braved a clandestine trip to Iran and managed to obtain a passport, again through clandestine ways. Back in Iraq, he took his wife and newborn son to their new destination — neighboring Turkey.

“I couldn’t go to Europe with an Iranian passport; there was the problem of visas. Turkey did not require visas and also, I did not want to be far away from the Kurdish people,” Saeedian said.

In Diyarbakir, the couple teamed up with a group of young enthusiasts to launch a studio that creates sculptures from metal and wood. Since then, Saeedian has also launched sculpture courses for aspirants in Diyarbakir and held close to 20 exhibitions in various Turkish cities, including Istanbul. The couple’s artistic work has included also numerous book illustrations and Kurdish-language puppet shows and animations for children.

Though he is not remorseful about having left Iran, Saeedian does not mince his words for his new home either. He is fond of the locals but critical of Turkey’s political system, which, he believes, has little respect for the arts. His fellow artists in Turkey have disappointed him, too, for what he sees as meekness in the face of authoritarian rulers. “The Iranian regime is 10 times more dictatorial, 10 times tougher, but culture and arts are very active,” he said. Many Iranian artists, he said, are actually risking their lives to defend what they believe in. “They are really brave. There are hundreds of artists who are actually spooking the state.”

Saeedian’s dream is a cultural revolution in the Middle East. “Ignoramuses are running the region … and world powers are unscrupulously selling [them] weapons,” he said. “A cultural and arts revolution is my biggest wish. Political revolutions — even if they happen in the hundreds — do not change mentalities.”

Without divulging details, Saeedian spoke of discord with the Kurdish political movement in Diyarbakir and said he wanted to leave the city. He has not yet decided what his next destination will be.

His wife, who continued working on her computer during the interview, chimed in to express dismay that many Kurds in Diyarbakir would not speak Kurdish. Echoing her husband’s criticism of the local arts scene, she said, “Arts and culture are not good in Turkey, but things are even worse in Diyarbakir. … In Iran, people who want to learn arts go to Tehran, but here nobody thinks of going to Ankara.”

Rasulpur sometimes travels to Iran, braving hours of questioning at border crossings because of her husband’s reputation as a dissident. In another sign of enduring bonds with her homeland, she donated the proceeds of a recent painting exhibition to earthquake victims in Iran.

Nowadays, Saeedian is working on the illustrations of a book about Diyarbakir’s ancient district of Sur by writer and activist Nurcan Baysal, a native of the city. Asked why she chose to work with Saeedian, Baysal praised him as a multifaceted artist whose talents go beyond sculpture. “He is a fine photographer and painter as well,” she told Al-Monitor.

“In his works, one can clearly see a resistance to oppression. … The history of the Kurdistan Region and what the Kurds have been through — you can see this in his photographs and sculptures alike. Seywan, I believe, has a prominent place among the living Kurdish artists.”