Meet the man out to save Gaza's antiquities

Nafez Abed, one of Gaza’s most prolific sculptors, has been restoring Palestinian artifacts for almost 35 years, but his work receives limited recognition in the funding-deprived Gaza Strip, where tourists are rare. 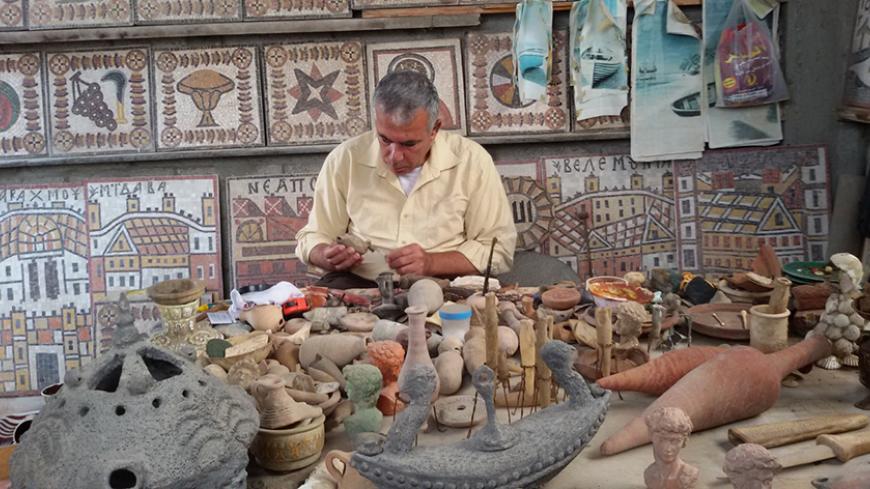 GAZA CITY, Gaza Strip — Perched on the roof of a house in Al-Shati camp, west of Gaza City, is a small room with a tin roof and plastic windows. Palestinian sculptor Nafez Abed uses the room as a studio, where visitors are dazzled by the artifacts and sculptures, some of which his hands shaped dozens of years ago.

The 55-year-old sculptor’s talent emerged while he was detained in Israeli jails during the first intifada. Upon his release in 1989, he gradually began honing his craft until he became one of Gaza’s most talented sculptors.

His precision and professionalism in copying and restoring ancient artifacts inspired the Palestinian Authority to hire him in 1994 to work in the Ministry of Tourism and Antiquities, where he advanced in rank until he became deputy director of the antiquities restoration department. His job took him to several countries, including France and Jordan, to benefit from the expertise there.

Abed’s modest workshop has been honored to host many international dignitaries, as well as the curator of the Geneva Museum, who was so impressed with Abed during a 2005 visit to Gaza that he invited him to live in Switzerland and work for the museum. But Abed rejected the offer, preferring to remain in Gaza and restore its artifacts.

Abed, who has been toiling at his craft for 35 years, has restored and copied antiquities dating back to the Greek, Roman, Byzantine and Muslim eras. He owns more than 500 ancient Greek artifacts, many of which he has copied. He also is adept at minting ancient coins and creating mosaics. Each mosaic requires about three weeks of continuous work.

All the raw materials he needs for his art are available in Gaza and don't have to be imported from foreign sources. These materials include clay, lead and various pigments for painting the artifacts.

Despite the beauty of Abed’s handicraft, demand for his copied works is very limited. Not many foreign tourists are willing to visit the Gaza Strip, especially since the Israeli siege imposed upon it in 2007. And the tough economic conditions endured by the Strip’s inhabitants force them to forgo such luxuries as art in favor of the absolute necessities.

Abed hoped to find sponsors to help him open a small museum. He would like to reproduce ancient art on a larger scale and pass on his expertise to others willing to learn his trade, to help preserve Palestinian heritage and ancient artifacts.

In his interview with Al-Monitor, Abed called on Palestinian President Mahmoud Abbas to reinstate his salary, which he said the Ministry of Finance in Ramallah has unjustly withheld since the Palestinian division of late 2007.

Speaking to Al-Monitor, the director-general of antiquities at the Ministry of Tourism and Antiquities in Gaza, Jamal Abu Rida, expressed his willingness to accommodate and sponsor him, saying the ministry has never turned away anyone who knocked on its door. He added, “Talents such as these are of utmost importance to us, because they help spread awareness about Palestinian antiquities and culture. Instead of using original works, we should use copies in public displays, as is done in most countries of the world, in order to protect the originals from vandalism, decay or theft and encourage artisanal crafts related to sculpting and artifact restoration.”

Rida noted that any exhibition or museum dedicated to sculpture would require substantial funds, which the ministry is unable to provide. He cited the lack of operational budgets resulting from the political dispute between the reconciliation government and Hamas, whose employees run the Gaza Strip’s affairs, and that the Ministry of Culture has the primary responsibility for opening such exhibits and museums.

For its part, the Ministry of Culture said it has endeavored to support all art projects. It recently sponsored some exhibits and installed commemorative monuments on Gaza City's streets. Sami Abu Watfeh, the ministry's director general, also said tough economic conditions have caused the downturn in demand for artifacts and copied works, even ones that are inexpensive.

Riad al-Astal, dean of the faculty of arts and head of the department of history and archaeology at Al-Azhar University in Gaza, described Abed’s artwork as of "wonderful" quality. He called on the Ministry of Culture to sponsor such talent by employing artists to restore original antiquities and produce copied artifacts, with the aim of spotlighting Palestinian culture, selling such pieces to interested buyers and to promoting Palestinian history, which Israel has suppressed in past decades and destroyed in its successive wars on Gaza.

In his talk with Al-Monitor, Astal cited the need for unified Ministries of Antiquities and Tourism that would be in charge of centrally managing existing antiquities in Gaza, providing the ministry in Gaza with an operational budget to sponsor artists and their art, market copied artifacts and expose the public to the truth about Palestinian history and culture.

Many Palestinian archeological sites were destroyed during the last Israeli aggression in 2014, despite the existence of international conventions for the protection of antiquities that compel Israel, as an occupation force, to safeguard the cultural and natural heritage of the land.