Turkey exerted its political and economic pressure on Iraq’s Kurdistan Regional Government to close the headquarters of political parties that share the ideology of the Kurdistan Workers Party. 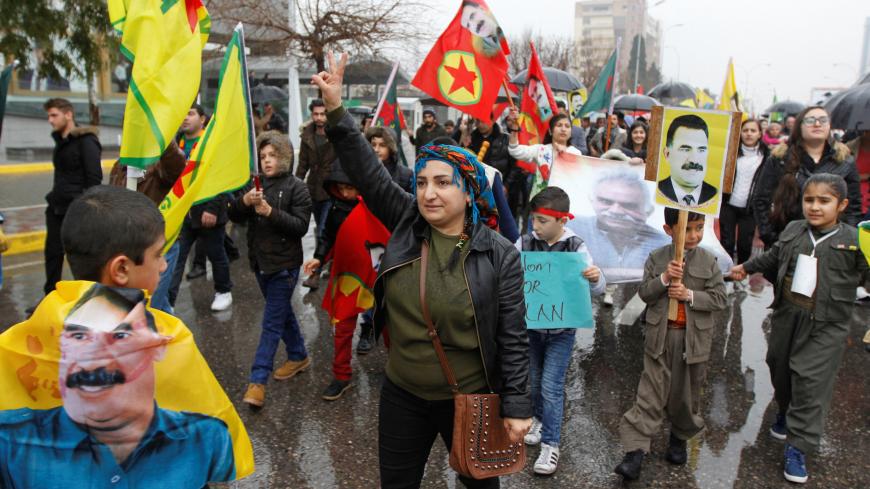 SULAIMANIYAH, Iraq — Yielding to extensive pressure from Turkey, the Kurdistan Regional Government recently decided to ban political parties not officially licensed by its Interior Ministry — even if those parties are licensed by Iraq's federal government. One such party, Tavgari Azadi, which supports the ideology of the Kurdistan Workers Party, or the PKK, says the closure of its headquarters is illegal and came about only as a response to Turkish threats.

The Kurdistan region's security services, the Asayish, closed Tavgari Azadi's headquarters in the city of Sulaimaniyah, as well as in the towns of Qaladiza, Raparin, Koya and Kifri, on Nov. 29.

Tavgari Azadi, also known as the Kurdistan Free Society Movement, was established in October 2014. It is a Kurdish political party that adheres to the ideology of Abdullah Ocalan, the imprisoned leader of the PKK. Tavgari Azadi received formal permission in December 2017 from Iraq's Independent High Electoral Commission (IHEC) to operate as a political party across the country. The party ran in the May parliamentary elections on a joint list with the New Generation Movement in the disputed area of Kirkuk, obtaining a seat in the Iraqi parliament.

The PKK is banned in Turkey, as it has been fighting the Turkish army since 1984, seeking to obtain greater political and cultural rights. Turkey, the United States and the EU consider the PKK a “terrorist” entity.

Following Kurdistan's failed independence referendum last year, Turkey and Iran grew more sensitive to Kurdish parties in the region. They frequently warned officials of the Kurdistan Regional Government (KRG) to impose limits on the activities of Kurdish parties that oppose Iran and Turkey, as well as Iranian and Turkish opposition parties.

KRG Deputy Prime Minister Qubad Talabani, a member of the Patriotic Union of Kurdistan (PUK), ordered the closure of the headquarters of all parties not licensed in the Kurdistan region on Nov. 25. However, Tavgari Azadi’s official spokeswoman said that closing their headquarters is an illegal, political decision forced by Turkey on the KRG.

In October 2017, Turkey banned all incoming and outgoing flights from Kurdistan airports in response to the Kurdish independence referendum. Ankara resumed international flights to and from Erbil on March 23, but extended its ban on direct flights to and from Sulaimaniyah.

“Turkish flights to and from Sulaimaniyah have not resumed yet," Dana Mohammed, head of Sulaimaniyah International Airport’s media office, told Al-Monitor. "We do not know when they will resume. The Turkish side has not formally told us anything about resumption of the flights.”

Of the PUK's decision to close Tavgari Azadi's headquarters, Hakan Karacay, Turkey's consul general to Erbil, said, "Undoubtedly, the move made by the PUK is the right one."

Tara Hussein, official spokeswoman of Tavgari Azadi, told Al-Monitor, "When we were saying that [the closing of our] headquarters was a decision from the Turkish state forced on the KRG to implement, it was hard for some people to believe us.”

Hussein dismissed claims that the party is affiliated with the PKK, describing such accusations as “baseless" and an "illegal pretext" to ban the party. She said the party has been banned for its “national stances against the occupying states," meaning Turkey and Iran.

She said the party's only tie to the PKK is "shared philosophy, which is a normal thing across the globe. We are holders of Ocalan’s thinking. … Today, many political organizations have been formed in Argentina, Latin America and elsewhere that hold Ocalan’s ideology.”

She said the party asked for permission from the KRG's Ministry of Interior to operate but never received a response. Thus, according to the Kurdistan region’s laws governing political parties, the party is formally licensed. The law stipulates that if a political party asks for permission from the KRG but does not get a response within three months, the party is considered licensed and can operate in the region.

Hussein said the party will not only file a complaint with IHEC against the party’s closure, but also will bring the case to the Iraqi Federal Court and international magistrates. She said IHEC is now following up on the issue.

“We know a number of political parties that are not licensed by the Kurdistan region and were not told to close their headquarters," Hussein said. "Paradoxically, some NGOs that have formal permission from the KRG were ordered to close their offices, as they are close to us.”

Samir Hawrami, media adviser to Deputy Prime Minister Talabani, told Al-Monitor that any political party operating in the Kurdistan region needs to obtain a formal license from the KRG Ministry of Interior, or else it will be banned. Hawrami said that regardless of whether a party was licensed by Iraq, it should get additional licensing from the KRG Interior Ministry.

“There were statements from Turkish officials that Sulaimaniyah is embracing groups that Turkey labels as terrorists. Turkey considers any party that believes in Ocalan’s ideology an extension of the PKK,” said Rawshan Qasim, a Kurdish journalist and activist. Qasim is from northern Syria and has sought refuge in the Kurdistan region since 2004. Since then, she has held several political posts in the Syrian opposition.

“This is a baseless excuse from Turkey, as this party is licensed by Iraq. It is an Iraqi Kurdish party,” she added.

She also warned that Turkey wants to close down more Kurdish parties to fulfill its agenda in the region through fueling disorder and civil war.

“This is a big turmoil," Qasim said, "and currently there is danger of fights erupting among the Kurdish parties, in which the Kurds will be the ultimate losers.” She cautioned that Turkish pressure on the Kurdistan region will not stop until the Turks fulfill the "Ottoman dream of annexing Mosul and northern Syria."

Turkey understands that, with renewed US sanctions against Iran, it possesses a golden opportunity to pursue its aims in northern Iraq, as the Kurdistan region has no choice but to export its oil through Turkey. Ankara is seeking to kill two birds with one stone: to exert pressure and limit the activities of pro-PKK parties in Kurdistan on the one hand, and to transport Kirkuk's oil through Turkish territory — a move that will boost Turkey's troubled economy.