There's a new sheriff in town, so to speak, now that the Syrian Interim Government has established a military police unit in northern Aleppo. 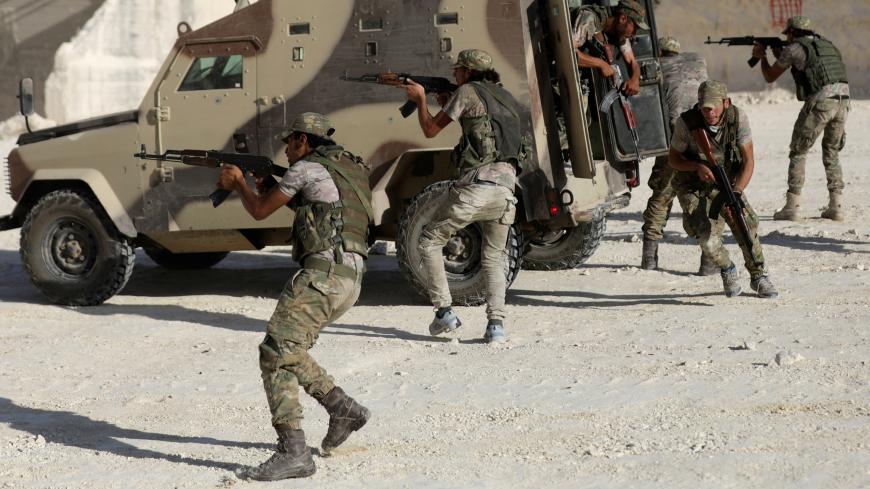 Fighters from the Free Syrian Army (National Brigade) demonstrate their skills during a military display as part of a graduation ceremony, al-Bab, Syria, Sept. 27, 2017. - REUTERS/Khalil Ashawi

ALEPPO COUNTRYSIDE, Syria — The Syrian opposition is taking steps to police its own army.

The Syrian Interim Government's recently formed National Army will now answer to a 300-member military police force in the Aleppo province of northern Syria, where Turkey conducted its Operation Euphrates Shield with the help of the Free Syrian Army (FSA). The 22,000-member National Army is comprised of fighters from about 30 FSA factions.

The new military police force deployed this month and is designed to organize military action, minimize abuses committed against civilians and prosecute opposition military members who commit anything from murder to driving over the speed limit. It also works to prosecute members suspected of belonging to organizations deemed hostile to the FSA, such as the Islamic State (IS) and the Kurdish People’s Protection Units (YPG).

The military police force was formed as an alternative to FSA security forces, as each faction had its own security institution. Based in the city of al-Bab, the force has a military court and two stations, in Jarablus and Azaz.

Al-Monitor toured the Azaz station in the Euphrates Shield area where the military police have erected several checkpoints. The station's 100 policemen wear military uniforms similar to those of the FSA. Turkey has provided them with four-wheel-drive military vehicles as well as medium and light weapons, and they get a monthly salary of $150.

Othman said the force's 300 policemen were chosen from among 500 candidates based on their fitness level and underwent a 30-day training course in Turkey. These members, he said, were equally distributed to al-Bab, Jarablus and Azaz. Those who weren't selected will continue serving in the army pending another training session that may be held in mid-2018.

Hisham Darbala, commander of the Azaz military police station, told Al-Monitor, “The military police includes several sections, namely detection, ceremonial occasions, security checkpoints and judicial. … [The sections] don't, however, interfere in the event of violations committed by civilians, as their [jurisdiction] is limited to the Syrian National Army members.”

Nemer Mohammed, deputy commander of the Azaz station, told Al-Monitor that a number of military police checkpoints have been deployed in the region separating the Euphrates Shield area from Afrin, which is witnessing battles between the YPG on one side and the Syrian National Army and Turkish forces on the other. The checkpoints are designed to prevent crimes, ideally, and to keep YPG members from escaping from the battle zones toward the Euphrates Shield area.

Of note, when the FSA factions and the opposition government formed the National Army, they agreed that when their operations end, the factions will turn over all weapons, vehicles, equipment and factional headquarters to the interim government's Ministry of Defense. According to the agreement, factions that fail to comply are to be dismissed.