In an attempt to compensate for threats of US aid cuts, the Palestinian Authority is revamping its tax system to expand the tax liability of citizens, which could have a catastrophic impact on Palestinians. 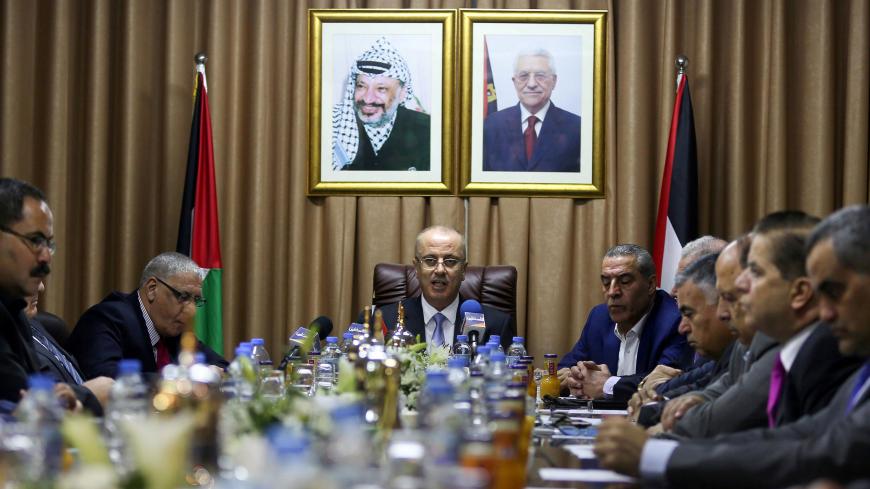 GAZA CITY, Gaza Strip — The Palestinian Cabinet announced Feb. 27 in a statement it released after the end of its weekly video conference session in Ramallah and Gaza City new tax measures to increase local revenues.

The statement noted that the 2018 budget amounts to $5.8 billion, with revenues of about $4 billion and foreign funding of $775 million. The increase in expenses will exceed the increase in revenues by 11%.

As per the statement, these measures aim at curbing the 2018 budgetary deficit that accounts for $1 billion and at facing the dwindling foreign subsidies that the Palestinian Authority (PA) relies on to cover the deficit.

Prime Minister Rami Hamdallah said during budgetary deliberations with businessmen and representatives of civil society associations in Ramallah Feb. 19 that foreign subsidies for the Palestinian budget dropped by 70%, compared to 2010.

The government's statement mentioned that the tax measures include “developing the tax system through tax liability by widening the base of taxpayers, attracting new taxpayers and limiting tax evasion.”

According to the statement, the measures aim at “adopting a fourth tax bracket instead of the three tax brackets in place since 2015 to promote social justice.” The income tax ranges between 0% and 20%, but does not exceed 15% for the highest income levels.

A high-ranking official in the Ministry of Finance told Al-Monitor on condition of anonymity that the US threat to halt all financial aid to the PA was the main motive for the government to amend the tax system to support its budget.

During his participation in the World Economic Forum in Davos, Switzerland, on Jan. 26, US President Donald Trump threatened to cut off aid to the PA if it does not resume peace talks with Israel. The PA had announced its refusal for the United States to play the role of mediator in the talks after Trump declared Jerusalem the capital of Israel on Dec. 6, 2017.

He added, “The government decided to face US threats by defying them instead of caving in and by seeking to free itself from the conditional US support on political concessions by aiming to improve the tax system to make up for the budget deficit. Thus, this step constitutes a national project.”

Jiab noted, “The third bracket constitutes the problem, as it is unfair for a small company that makes an annual income of 150,000 shekels such as private clinics and law firms to pay the same tax as large companies that make millions of dollars per year, such as Palestinian banks and telecommunication companies.”

He added, “The amendment of the tax system would involve the inclusion of a fourth bracket targeting companies that earn 1 million shekels [$288,900] or more per year; they would have to pay a 20% tax rate.”

He said the fiscal measures would have a positive impact on the government’s treasury.

Maher al-Tabbaa, the director of public relations at the Chamber of Commerce and Industry in the Gaza Strip, told Al-Monitor, “The fiscal amendments will have a negative effect on citizens although they target large companies. In fact, these companies might confront the increased taxes by raising the prices of products and services they offer to citizens who are already struggling with economic crises.”

Tabbaa added that the fiscal amendments will worsen the Palestinian economic crisis, especially in the Gaza Strip where unemployment reached 46.6% and poverty 65% in 2017. Meanwhile, 80% of Gaza’s citizens rely on food aid from the UN Relief and Works Agency and other international organizations.

Economic expert Adel Samara, who holds a doctoral degree in politics and development from Exeter University in the United Kingdom, agrees that the government’s attempt to curb its budget deficit by making fiscal amendments will have a catastrophic impact on the citizens.

Samara told Al-Monitor, “Imposing taxes happens everywhere around the world, and it is normal. But in the Palestinian territories the situation is different because there is no tangible Palestinian production effort that allows imposing taxes on Palestinian consumers.”

He said that the government does not use income tax funds that it collects efficiently, noting, “The income tax should be spent on development projects, improvement of infrastructure and promotion of health and education services, roads and transportation, social welfare and retirement funds.”

Samara added, “The government spends these taxes to pay the wages of its employees and to curb the deficit in its annual budget. For the implementation of development projects, it relies on global funds, especially the financial support by the European Union.”

It seems that through the new fiscal measures, the government aims at finding alternatives to US financial support that might be halted, but these measures will definitely increase the financial burdens on Palestinians who are already struggling economically.