Saudi crown prince comes under fire as he visits US 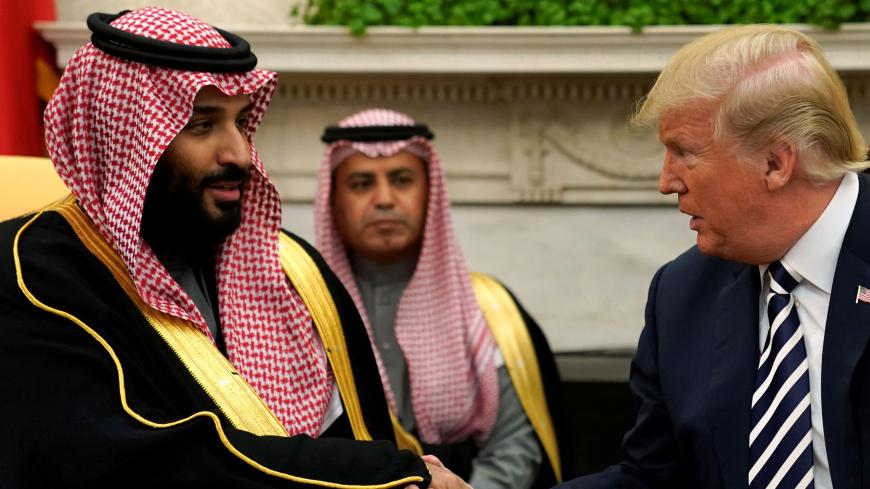 The Trump administration staged a warm welcome for Saudi Crown Prince Mohammed bin Salman, and the Saudis are pleased by the president’s choice for his third national security adviser, John Bolton. But behind the warm words and photo ops, there were few substantive accomplishments, and criticism of the prince and the kingdom outside the administration is growing.

Trump, while hosting the prince March 20, held up posters showing prospective US arms sales to the kingdom. The president spoke of how rich the Saudis are but complained that they weren’t spending enough on American weapons, implicitly admitting that the $110 billion arms sale he trumpeted in May 2017 in Riyadh was oversold. The prince looked uncomfortable as the president said Saudi purchases since the summit had been “peanuts” and as the president held up the boards to show the deals he wanted.

The Saudis are buying more munitions from the United States for the air war in Yemen, but Mohammed's biggest weapons deal so far is a $7 billion one to buy 48 Eurofighter Typhoons from the United Kingdom. Typhoons are built by a consortium of British and European companies.

The Saudis do have a huge defense budget. The International Institute for Strategic Studies’ annual report on military issues for 2017 says Saudi Arabia had the third-largest defense budget in the world behind only the United States and China. With their defense budget of almost $77 billion, the Saudis are by far the highest per capita military spenders in the world. But the return on the investment is a war in Yemen, an expensive quagmire with no end in sight.

The Saudis are very bullish on Bolton. The media has hailed his calls for “well ordered” regime change in Tehran and his promise at an opposition rally a year ago that he will “celebrate” with them in Tehran by 2019. The Saudi press is encouraging the Trump “war cabinet” to take on Iran, Turkey and Qatar to evict them from Yemen, Syria, Lebanon and Iraq.

The crown prince has been dogged by negative publicity since his tour of the United States was announced. The New York Times did a damaging expose of the detention of 300 prominent Saudis in November, which allegedly included the use of torture and led to at least one death. There followed unflattering portraits of his relationship with his mother and his wife. The relationship between the prince and Trump son-in-law and adviser Jared Kushner has led to intense media scrutiny. It must be very unsettling to see that much of the press reporting is sourced to unnamed people in the royal palace and family. More revelations are likely.

On the Hill, Trump was able to block congressional action against the war in Yemen, but the Saudis face a strong bloc of opposition to the war and arms sales. More attention to the war will only bolster criticism of the Saudi role. Recently, Amnesty International documented three dozen airstrikes by the Saudis and their allies that may qualify as war crimes. Leading American newspapers have called on the crown prince to stop the war.

The Saudi requests for looser restrictions on their plans to acquire nuclear power reactors were undermined by the crown prince’s public promise to seek nuclear weapons if Iran tries to do so if the nuclear deal collapses. Since Bolton and Trump seem determined to undo the Joint Comprehensive Plan of Action (JCPOA), that promise looks all too likely.

Israel has been more critical of any loosening in the nuclear power requirements for Saudi Arabia in recent weeks. Earlier this month, Prime Minister Benjamin Netanyahu lobbied against any deal for the Saudis, according to press reports. The Saudis' lobbying campaign will face formidable opposition if the Israelis are determined to block a deal. The pretense that the Saudi and Israeli governments are collaborating discretely against Iran will also be exposed.

The Saudi position has been that the JCPOA should be toughened with sanctions to stop Iranian meddling in the region and their missile program but that the pact not be scrapped. As the target of 100 Houthi missile attacks abetted with Iranian expertise, Saudi Arabia has every reason to lobby for controls on Tehran. The missile attacks are another important reason for the war to be ended before one hits a populated area and prompts an Iranian-Saudi crisis. The Houthis launched a barrage of seven missiles March 25, their biggest attack to date.

The crown prince is traveling to the Northeast, the West Coast and Texas to sell his reform package, Vision 2030, to potential investors. It’s a wise move to diversify the Saudis' connections beyond the Trump administration. It harkens back to a similar cross-country trip by Prince Faisal bin Abdulaziz in 1943, 75 years ago, that began the special relationship between America and the kingdom.