A video circulated on Kurdish social media showing a police filming of a group of women and men apparently caught in a brothel in Erbil stirred controversy in the Iraqi Kurdistan Region. 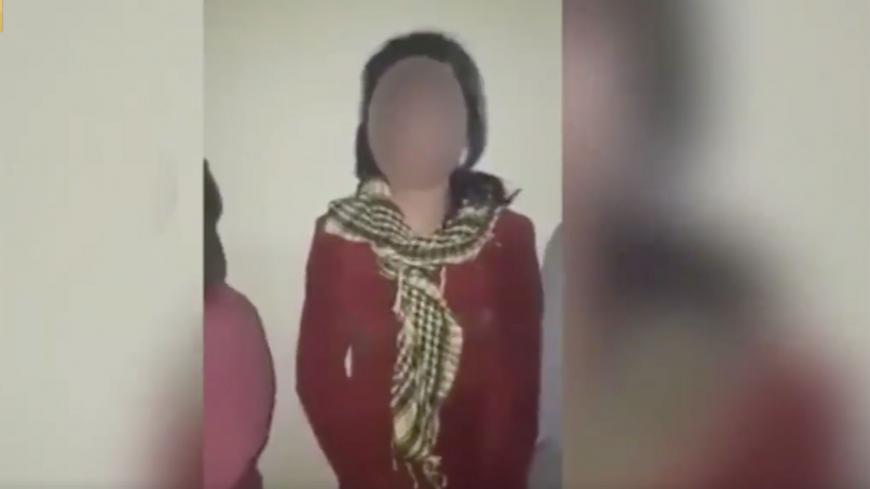 A still from a video made by police in Erbil shows a woman who was one of a group arrested in an alleged brothel, Erbil, Iraqi Kurdistan. Video uploaded March 4, 2018. - Facebook/NRT

The two-minute video was no different from the videos in which Islamic State captives were paraded by the peshmerga or the Iraqi forces. The room was dim, the 12 women — including a teenager — and the five men were terrified of the police officer ordering them to give their names, place of residence and ethnicity. They were allegedly caught in a brothel in Erbil; the women were portrayed as sex workers and the men as customers. Most were from the Kurdistan Region, but three of the women were from Baghdad. One woman even carried a toddler.

“My wife had loaned 100,000 dinars [$84.50] to the woman from Kirkuk and when she went to collect the debt from her, the Erbil police raided the house and took her away, too. That night they insulted her and she was beaten until the following morning,” the husband of one of the women from Baghdad told the NRT broadcasting company outside a courthouse in Erbil. “Is this the justice they talk about?”

“What were you doing there?” the police officer ordered. “I came for a f---,” one of the terrified Kurdish men responded. “How much did you pay?” the officer asked, getting a response of “40,000 [dinars].”

The video recorded at the Erbil police station was meant to be an admission of guilt, a method all too familiar in the judicial system of the Kurdistan Region. The Kurdish police forces often record video confessions of offenders and post them on police Facebook pages, and the Kurdish media regularly broadcast these videos. But this latest video created a wave of protest and resentment because of the way the police dealt with this issue, and there were calls for the police officers to be fired and for people in authority to be held responsible.

Women's rights groups in Sulaimaniyah and Erbil called on the public prosecutor to investigate the issue, and try those responsible and protect the women featured in the video. In the Kurdish social media there was an uproar and many feared that in a society where honor-related crimes are almost daily occurrences, these women would be killed by their families.

In fact, not far from the police station where the video was recorded, the bodies of eight unidentified women are kept in a refrigerator in a morgue, most of whom the police believe were victims of honor killings. Their corpses, disfigured by their families and disemboweled by wild dogs, make their identification almost impossible.

“This is in contradiction with the principles of human rights and the ethics of lawful investigation; it is also against … social norms,” said the Kurdistan Independent Human Rights Commission in a statement expressing its concern pledging to ask the public prosecutor to open an investigation.

The practice of TV confessions has been happening in Iraq for decades, and the regime of Saddam Hussein used this method repeatedly against its enemies, including the Kurds. Many Kurdish government officials old enough to remember Saddam’s brutal rule recognize the similarity of the methods the Kurdish security forces use and the methods that Saddam’s security apparatus deployed against captive Kurdish peshmerga fighters and political prisoners in the 1980s — inflicting fear in order to deduce TV confessions under duress. Yet there have been no calls to end the video confessions of offenders in the Kurdistan Region.

The Kurdistan Regional Government (KRG) has repeatedly been criticized for the methods its security forces use in detention; this criticism has come from international human rights organizations and the US Department of State's Bureau of Democracy, Human Rights, & Labor.

In its 2016 report, the Kurdistan Independent Human Rights Commission did not mince its words when it came to the issue of the rule of law. “Regarding the rule of law, there was no progress in upholding justice, not because there are no laws — in fact there are good laws — but they are not implemented,” the commission said.

Whether this recent public outrage leads to effective pressure on the KRG to end these dubious methods of investigation such as video confessions is open to debate. But some have come to believe that the KRG should stop following in the footsteps of the previous regime in forcing people to make video confessions. “No human being has the right to trample on the dignity of another human being. No matter what offense they have committed, you have no right to humiliate them,” Zana Boskani, a shopkeeper in Sulaimaniyah who has watched the video and felt outraged, told Al-Monitor. “There is a contradiction here. We were victims of this culture of forced confession during the previous regime, but now we have become the abusers.”

Many people posted on their social media pages the poem “Prostitute” by famous Kurdish poet Sherko Bekas that describes how a prostitute lifts her dress in a public place and says, “I only sell my own body/ just my own and nothing else/ but on the street I see them/ they have sold/ the body of the mountain/ the body of the plains and the fields/ the body of the sunlight and the rain/ and without a care, they have sat upon the throne/ of this country’s honor.”