Despite millions of dollars spent on combating violence against women in Iraqi Kurdistan, the phenomenon is still common in the region and the number of victims continues to rise. 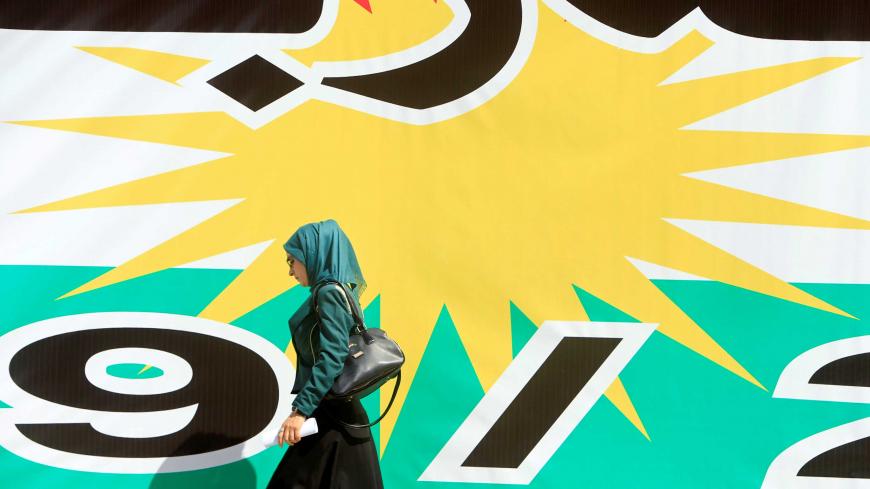 A woman walks past banners supporting the referendum for the independence of Kurdistan, in Erbil, Iraq, Sept. 24, 2017. - REUTERS/Alaa Al-Marjani

Shaima was 17 years old and entering her junior year in school in Erbil. Her mother, who was worried about family "honor," often challenged her daughter in heated discussions. Eventually, Shaima's family barred her from going to school. Around 4 p.m. on Oct. 30, the neighbors heard gunshots coming from Shaima’s house. “This is not your business,” Shaima’s mother, who was outside the house, told concerned neighbors. The family claimed that Shaima had committed suicide, but it soon became evident that her younger brother had murdered her with an AK-47, allegedly over possession of a mobile phone. When her body was examined, there were gunshots to her hands, head and chest, and it appeared to Erbil police spokesman Maj. Hoger Aziz that, out of her innocence, Shaima had covered her face with her hands thinking that she could protect herself against the bullets from the barrel of her brother’s weapon.

Shaima is but one of many girls and women who often die in "mysterious circumstances": They are burned alive in an "accidental fire," savagely stabbed with a knife, killed by a bullet or simply thrown off of a cliff. The faces of the murdered women are often disfigured so that the police cannot track the murderers down. But even those killers who are caught by police sometimes go free if they are influential or know people who are influential.

The Kurdistan Regional Government (KRG) and international organizations such as the United Nations have poured millions of dollars into raising awareness about the plight of women in Kurdistan. But the data shows the situation is only getting worse. Outgoing UN special representative to Iraq Jan Kubis acknowledged the KRG‘s efforts to end so-called honor killings and other forms of violence against women, including amending national laws regarding honor killings, setting up more women's shelters, restricting the practice of polygamy and bringing KRG law on combating violence up to international standards. “Despite increased awareness of sexual and gender-based violence and important efforts to combat it, there is still an alarming number of women and girls who continue to face this horrific violation of their rights,” Kubis said Nov. 25.

The KRG set up the High Council of Women’s Affairs in 2009 to address entrenched concerns that exist in Kurdish society. The council spearheaded a 16-day campaign that began Nov. 25 to end violence against women.

Head of the General Directorate of Combating Violence Against Women Kurda Omar told NRT channel on Nov. 6 that in the first 10 months of 2018, violence against women has increased both at home and at work, particularly sexual violence. In the first nine months of this year, 91 women were killed or "committed suicide" in the Kurdistan region, 203 women either "burned themselves" or were burned, 87 sexual assault cases were recorded, and 7,191 women complained about being subjected to violent acts, according to official statistics quoted by NRT.

“The data shows that the violence is increasing every year,” Shokhan Hama Rashid, a lawyer who specializes in cases of violence against women, told Al-Monitor. Hama Rashid, who has worked in this field for the last 14 years, believes there has been progress in raising awareness, and the increase in statistics could partly be explained by the fact that more and more women are coming forward to be heard — but he says there are fundamental reasons why the violence is so entrenched. “We encourage people to go to court, but there is huge bureaucracy … sometimes the cases are politicized or political parties interfere,” Hama Rashid said, adding, “Some people prefer to resolve their issues through tribal councils.” Tribal councils often refer to the social offices of the two ruling parties, the Kurdistan Democratic Party (KDP) and the Patriotic Union of Kurdistan (PUK), where disputes between families and tribes are resolved outside the boundaries of the court system with the participation of tribal chiefs.

Historically, the Kurdish parties have justified violence against women perceived to be "immoral" as a way of preventing the corruption of youths and thus weakening the Kurdish liberation movement. There are many tales of how women were gunned down in the streets of Sulaimaniyah, Erbil and in the countryside throughout the second half of the 20th century because the armed men in the mountains believed these women were immoral.

Others, like Kurdish intellectual Mariwan Kanie who teaches at Amsterdam University, believe that following the establishment of the Kurdistan government in 1992 under the protection of the international community, the new rulers who were former selfless peshmerga commanders became too greedy and corrupt and turned the whole Kurdish society upside down. “The transformation of the ex-peshmerga into corrupt tycoons has changed the class structure of society and resulted in a social, political and cultural crisis,” Kanie wrote in April 2015. “Coercion and force have become crucial in protecting the dominant power relations in Kurdistan. Violence against women is part of this newly emerged context and is related to this crucial transformation in the governing practices since the 1990s.”

Nyaz Abdullah, an independent journalist with a particular focus on women issues, also believes that — post-1991 — violence against women has increased under the Kurdish rule. “The statistics show that since 1991, thousands of women have been killed. I personally believe that the number of women killed in the name of 'honor' is no less in number than the victims of Halabja,” Abdullah told Al-Monitor in reference to the 5,000 people who were murdered during the gassing of the city of Halabja in March 1988 by Saddam Hussein's Baath Regime.