The Kurdistan Regional Government, with the help of a former US State Department official, is fighting human trafficking. 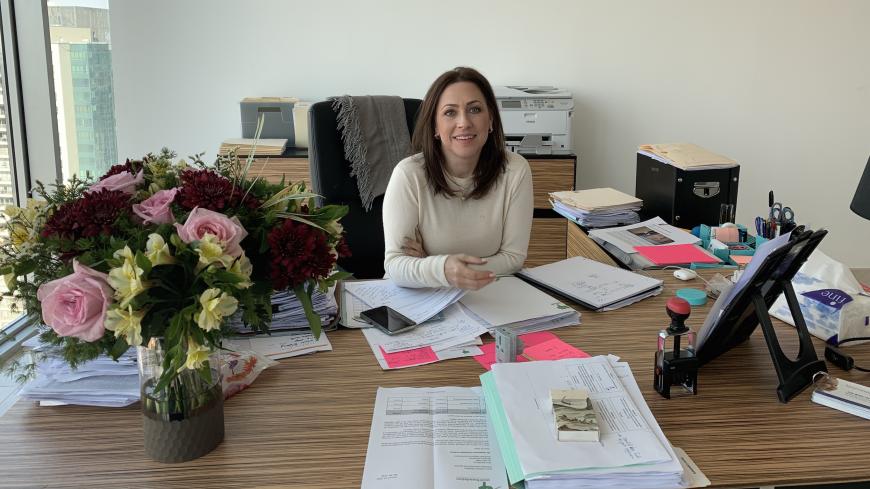 ERBIL, Iraqi Kurdistan — At the Kurdistan Regional Government’s newly minted trafficking in persons unit, three Ghanaian women sit in a reception area toying with their mobile phones. Their faces light up when a tall young man walks in. Karwan — he asks that his full name be withheld because of the sensitive nature of his work — is a member of SEED, a local nongovernmental organization whose core mission is to empower and protect women, and he is helping the Africans free themselves from abusive employers.

SEED set up Iraqi Kurdistan’s first ever shelter for trafficked men and women in November and the Ghanaians will be housed there until they find new employment or return home.

Many credit SEED’s co-founder Sherri Kraham Talabani for badgering Iraqi Kurdish authorities into establishing the department for combating trafficking in persons in 2018, and which became operational in June 2019.

Since its inception, authorities have blacklisted and shut down at least 38 recruitment agencies, including one belonging to a very big local fish, said Sardar Fadhel Yayha, the youthful police major who heads the unit. “SEED has been instrumental in our work,” Yayha told Al-Monitor during a recent interview at the Erbil headquarters of the Directorate of Combating Human Trafficking, as the outfit is formally known. “The most vulnerable are the Africans.”

The Kurdistan region of Iraq is more often associated with the misery of its own people — mass slaughter by Saddam Hussein, and more recently the nightmare inflicted by the Islamic State. But an oil boom changed the face of war-wracked region, with sleek high rises mushrooming across Erbil, the administrative capital, and fancy restaurants catering to an emerging class of prosperous Kurds who don’t want to do menial labor. And so Sri Lankan, Filipino, Bangladeshi and African migrant workers are doing it for them.

“2003 to 2013 was a golden age when foreign workers began pouring in,” Talabani told Al-Monitor over coffee at SEED’s roomy new office in Erbil. Unsurprisingly, horror stories of the likes heard in the Gulf sheikhdoms began filtering through. Talabani recalls the recent case of an African housekeeper sent into various cleaning jobs. “She felt unsafe and unprotected and people attempted to have sexual relations with her. And then when she went back to the agency that recruited her they locked up all the women in the bedroom all night, every night to prevent them from leaving. They were forced to pee into a bottle. She was also missing pay.”

One of the women’s employers reached out to Talabani after hearing her speak on a radio show and asked her to intervene. Exploitation typically occurs almost immediately after victims arrive, when traffickers fail to register them with authorities and hold them hostage, confiscating their passports and threatening them with exposure — and imprisonment — if they don’t heed orders.

As word of SEED spreads, victims have been seeking help through its hotline from as far afield as Baghdad. At least two traffickers, one Kurdish, one Ghanaian, were arrested over the past two weeks. “They had trafficked our cases,” Talabani said.

While SEED responds to emergency needs, victims rarely if ever get full justice. “The few cases that make it to the court are frequently prosecuted under other laws," Whabiya Zrar, a human rights lawyer, told the Iraqi Kurdish media outlet Rudaw.

Agencies that are shut down are often able to reopen under a new name. “The victims generally believe that many of the perpetrators are powerful and would still be able to harm them,” he said.

One of Talabani’s clients, a foreign female worker, is a case in point. She was violently raped by her employer’s son and reached out to her embassy in Baghdad, which in turn reached out to SEED. The foundation found temporary lodgings for her and a co-worker who was also being sexually harassed by the man and helped them file charges with the police. But the man tracked them down at the hotel and raped his victim a second time. The man’s family then filed charges against the women accusing them of theft. The women were arrested and the family only agreed to drop the theft charges if they dropped the rape charges. They did. It later emerged that the perpetrator had a relative working for the police.

The foundation has a dedicated program to train police officers to combat violence against women. This starts with confronting their own violence at home. “Almost half of all women in Iraq suffer intimate violence at home,” Talabani said.

Her foundation receives up to $150,000 from US donors and support from local benefactors in Iraqi Kurdistan. She declines to identify them by name. The US, British, and Canadian governments, among others, have supported SEED programs.

Talabani first moved to Iraqi Kurdistan in 2012 with her husband, Qubad Talabani, who has been the KRG's deputy prime minister since 2014. He is the son of Kurdish leader and former Iraqi President Jalal Talabani, who died in 2017. Sherri Talabani, who has a law degree from George Mason University and who had a high-flying career with the State Department, was determined to put her experience to good use. She had worked with the Coalition Provisional Authority in Baghdad, and had assisted in US-brokered peace talks between her father-in-law and his political rivals from the Kurdistan Democratic Party. That is when she met and fell in love with her husband. She, however, remains fiercely independent and refuses to leverage the family name.

The couple are something of an oddity in Erbil, which for all its veneer of modernity remains deeply conservative and stubbornly patriarchal. The wives of the president and of the prime minister, Masrour Barzani, are never seen in public. “People gossip about Sherri, they don’t approve of her going around everywhere with her husband,” confided the wife of a government official, on condition that she not be identified by name. It’s this culture of “ayeba” or “shame” that frowns on women being assertive that Sherri Talabani, a native of Jackson, N.J., is up against. It’s a veritable minefield. But the feisty Talabani has waded in eyes wide open, saying she is inspired by her equally iconoclastic mother-in-law, Hero, who took up arms against Saddam Hussein, among other exploits.

“I think that for many Kurds, younger Kurds especially, Sherri and Qubad Talabani represent the promise of a new, better, Kurdistan. A more modern Kurdistan. A more egalitarian Kurdistan,” said Kenneth Pollack, a resident scholar at the American Enterprise Institute with deep knowledge of Iraq, in emailed comments to Al-Monitor.

When she set up SEED with Tanya Gilly-Khailany, a former member of the Iraqi parliament, Talabani said she wanted to set up an organization, “plant a seed” that would foster women’s empowerment, economic development and good governance “and then the ISIS [Islamic State] thing happened.” The jihadis hauled 5,000 Yazidi women and children into captivity, subjecting them to sexual violence, torture and murder. Six years on, more than half have either escaped or been freed.

“When women suffer sexual violence in war, it not only has disastrous consequences for her and her family, but it tears apart the fabric of society. So if we want to end the cycle of violence in Iraq, we must support them, and we must address the pervasive violence against women,” Talabani said.

SEED’s team of psychologists has been working with Yazidi victims in separate camps in the province of Dahuk, near the Syrian border, helping to reduce depression, anxiety, nightmares and suicide ideation. SEED also assists them with medical services, government benefits and reconnecting with their communities. Talabani said “people can’t access medical help here easily because the system is under siege and cannot cope with demand. Yazidis suffer the most because they are very marginalized and often rejected.”

Yazidi women and girls face rejection within their own community if they seek to bring children fathered by their IS captors back with them. Many have been pressured to leave their children in orphanages in Iraq or in Syria because they are not accepted as Yazidis by the community’s religious leaders. “It’s not our decision, it’s the decision of our holy majlis. We are also mothers, but we can’t do anything,” said Leyla Ibrahim, who helps run the Yazidi House, a community center in Amude in Kurdish-controlled northeastern Syria, in an interview with Al-Monitor.

The center is helping care for some 40 Yazidi orphans born from IS fathers. There are some babies. The oldest is 5½ years old. “The [holy] council is still debating their future,” Ibrahim said. Meanwhile, mothers forcibly separated from their children are suffering a whole new layer of trauma that needs to be urgently addressed. Yazidi mothers who refuse to relinquish their “children of war” have opted to remain in the al-Hol camp where the wives and children of IS fighters are being interned.

Set against such suffering, the agony of young teenagers exploited by sexual predators on social media may seem almost trivial. But it’s not. A growing number are being blackmailed by people who photo shop their pictures in compromising ways. “They cut your head and transpose it to a naked body, and then say, ‘If you don’t give me money I will spread your pictures on social media,’ and surprising as it may sound, half of the victims are boys,” explained a SEED counselor to a group of young men and women during a recent workshop in Erbil. SEED devised the program to help youngsters fend against such exploitation. The event is being hosted by the local branch of the Preemptive Love Coalition, a global NGO combating violence. The consequences can be deadly for victims whose families deem they have stained the family honor.

Some 120 women died in gender-based violence in Iraqi Kurdistan last year. Some 13 of them were the targets of honor killings. None of the cases make it to court. SEED is co-sponsoring an exhibition that launched this week in Erbil to create greater awareness around the long taboo issue. Kurdo Omar Abdullah, the head of the Directorate of Combating Violence Against Women, said matters actually are improving despite the deaths. “In previous years, 60-70 women would be killed due to honor,” she said.