Landowners waiting for next step in Jordan-Israel gas pipeline

Members of the Jordanian Bar Association are readying lawsuits to challenge land expropriations for the construction of a pipeline for natural gas from Israel's Leviathan field. 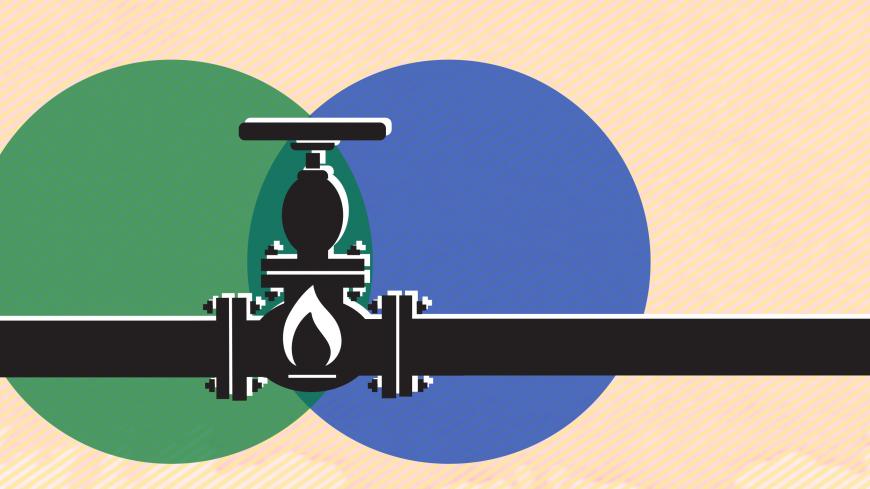 Image by Hugo Goodridge/Al-Monitor - Israel and Jordan are working to connect pipelines at the Al-Sheikh Hussein border crossing to transport gas from Israel's Leviathan gas field in the eastern Mediterranean into Jordan.

AMMAN — Farmers and others owning land near Jordan's northwestern border with Israel are waiting for the go-ahead for land expropriations to begin in clearing the way for the laying of a natural gas pipeline. The pending expropriations stem from an agreement signed in September 2016 between the National Electric Power Company (NEPCO) and Noble Energy, a US company that won the concession to exploit Israel’s Leviathan gas field in the eastern Mediterranean. Under the agreement, Israel will supply Jordan with 45 billion cubic meters of gas from the field over a period of 15 years at a cost of $10 billion.

As required by Expropriation Law no. 12 (1987), the Ministry of Energy and Mineral Resources published an announcement in daily newspapers on Jan. 24 notifying the public of its intention to request that the Council of Ministers grant the authority to expropriate land for the pipeline. The announcement included the names of the hundreds of landowners whose property would be expropriated “to install a natural gas pipeline from the supply station on the Jordanian border near the Al-Sheikh Hussein crossing to the connecting point with the Arab natural gas pipeline in the Khanasri region in Mafraq governorate.” The government will also rent an additional 10 meters on either side of the pipeline during the two-year installation period for works and facilities. After work is completed, the two-year rents will end.

The planned underground pipeline will run around 55 kilometers, and the government has allocated 11 billion dinars ($2.1 million) in the 2018 general budget for its installation. The lands to be expropriated amount to 344 dunams, and those to be rented extend over 611 dunams, in 18 towns in the Irbid and Mafraq governorates. According to the 2016 gas agreement, the pipeline will begin transferring around 225 million cubic meters of gas daily from Israel by 2019.

The connection point for the supply system from Israel into Jordan is near the Hussein crossing and from there connects with the Arab Gas Pipeline at the city of Mafraq. That line runs south to the natural gas terminal and port in Aqaba and from there connects to Egypt, all the way to al-Arish in the northern Sinai. Israel is considering supplying Egypt with gas through Jordan, Reuters reported.

Farmers in the northern Jordan Valley along the Jordan River, which forms the country’s northwestern border with Israel, report that Israel has begun excavating earth, building infrastructure and delivering sections of pipe. Mohammad al-Shamali, who owns a farm near the border, told Al-Monitor that he has seen excavations underway on a mountain facing his farm, which overlooks the river, and the extension of huge pipes to the Jordanian border. “This indicates that the pipeline is becoming a reality,” Shamali said.

Shamali is one of the many who will lose property to the pipeline. Land owned for development by the engineers' and physicians' syndicates will also be expropriated. The two trade unions have been among the most vocal in their opposition to the gas agreement with Israel. They have joined in forming a united front with other syndicates and activists to take legal action.

The syndicates as well as political parties object to the gas agreement and pipeline because they oppose normalization with Israel. Some trade unions are calling for rescinding the decision because they do not consider the pipeline to be in the “public interest.” They believe, instead, that the gas line will harm Jordan's interests. The Enemy's Gas Is Occupation, a coalition of activists, parties and trade unions that began as the Jordanian National Campaign Against the Gas Deal with Israel, argues that linking Jordan's energy supply to Israel makes Jordan vulnerable, threatening its economic security, in the case of a dispute with Israel, which could turn off the tap.

Some objections are more personal, having nothing to do with Israel. Shamali said, “The gas pipeline track will destroy hundreds of blooming citrus trees in al-Manshiyya village, in the northern Jordan Valley, because it passes through productive farms that are the source of living for farmers and their families.”

Others are concerned about compensation being adequate. Another farmer, Youssef al-Bachtawi, told Al-Monitor, “My farm, located in the northern Jordan Valley, will be expropriated, and it is the source of my income. It is a productive farm, where I grow citrus trees. I will resort to the Jordanian judiciary to appeal against the acquisition.” Bachtawi said he does not yet know the amount of compensation to be paid to landowners. No information has been made public on how it will be calculated.

Hisham al-Boustani, a member of the Dentists’ Syndicate, told Al-Monitor, “The gas pipeline will have strategic and moral implications since relying on the Israeli pipeline means squandering people’s money and linking Jordan economically to Israel. After all, 56% of the revenue will go to the Israeli treasury, soldiers, settlements and wars.”

On March 19, the syndicates gave powers of attorney to the Bar Association, a coalition member, to bring a lawsuit against the government challenging the expropriation decision once notice is published in the Official Gazette, association member Nour Al-Imam told Al-Monitor.

Abdel Raouf al-Qaraan, a farmer from the village of Taybeh in Irbid whose land is slated for expropriation, said that he too had given power of attorney to the Bar Association. “We did not go to the court so far, since expropriation has not yet occurred,” he remarked. The government has, however, sent inspectors out to his property for a feasibility assessment.

At a parliamentary session on Feb. 12, representative Ahmed al-Raqab asked Energy and Mineral Resources Minister Saleh al-Kharabsheh, who was in attendance, whether lands had already been expropriated. No answer was forthcoming. Speaker Atef Tarawneh asked Kharabsheh or any member of the government to respond to Raqab, but they evaded the question. Tarawneh remarked sarcastically, “No expropriation has yet been made.”

Work on the gas pipeline and other projects, including the Two Seas Canal, were temporarily halted due to tensions between Israel and Jordan after a security officer at the Israeli Embassy in Amman shot and killed two Jordanian citizens in July 2017. The pipeline project resumed after Israel apologized on Jan. 20 and offered $5 million in compensation to the victims’ families.