A confrontation between the Jordanian government and parliament looms after the launch of a trial run pumping Israeli natural gas to Jordan amid vocal public opposition. 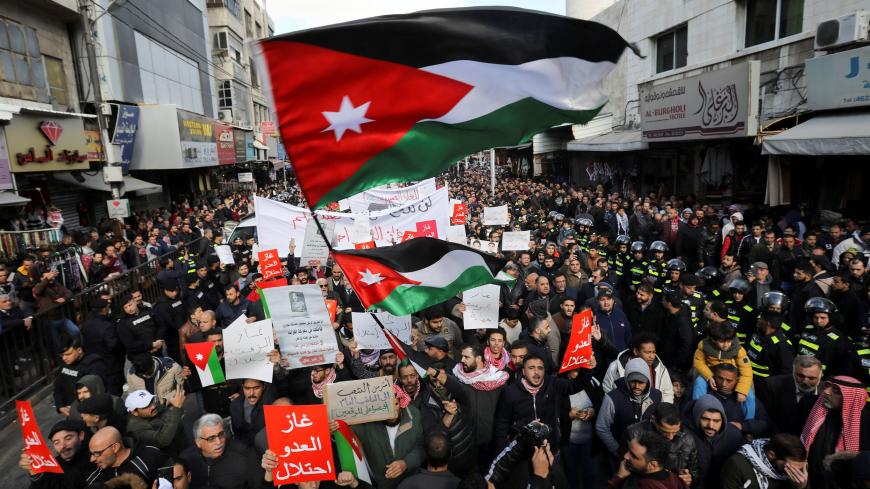 AMMAN, Jordan — Jordanian citizens and residents opposed to normalization of ties with Israel have not been shy in making their opinion known when it comes to the prospect of Jordan acquiring natural gas from neighboring Israel. In their most recent effort to be heard, thousands took to the streets of Aqaba, Irbid, Karak and Zarqa, chanting “From north to south, we refuse looted gas,” voicing their rejection of a deal that continues to inch closer and closer to full implementation.

The protests, held Jan. 10, followed the launch of a three-month trial run by the National Electric Power Company (NEPCO) to pump gas from Israel's offshore Leviathan field, for which the US-based Noble Energy Company and an Israeli conglomerate hold the concession. NEPCO signed a deal with Noble and the conglomerate to import gas from the Mediterranean in 2016.

Opponents of the agreement cite political and economic reasons for their rejection of the arrangement. Jamal Jit, a political activist from Irbid who took part in the Jan. 10 protests, told Al-Monitor, “The government will not force us to normalize [relations] with Israel by lighting Jordanians’ houses with this gas.” Jit views the gas as rightfully belonging to the Palestinians and thus in his eyes “looted.”

Protesters in Zarqa, east of Amman, cast Israel as the enemy, carrying photos of Jordanian soldiers who had died in the Battle of Karameh (1968), at which the Jordanian army and Palestinian factions fought against the Israeli military. On the photos was written, “Do not trade my blood for gas”.

Mohammad al-Abssi, an activist with the Enemy’s Gas Is Occupation, a campaign challenging the agreement, asserted, “Jordan does not need to link the fate of its energy [supply] to Israel.… We can also rely on alternative energy.”

Meanwhile, Jordanian parliamentarians are trying to pressure Prime Minister Omar Razzaz into reneging on the agreement by threatening a no-confidence vote against his government. To that end, 29 members of the House of Representatives signed on to a motion to hold a non-confidence vote. If an absolute majority of the House votes no-confidence, the government must resign.

“We tried to hold an urgent session to discuss starting to pump Israeli gas, but the speaker of parliament did not approve,” Assaf continued. “The discussion of the gas agreement was delayed two weeks, and I expect the session to be heated. Even the state budget discussions that began Jan. 12 and ends Jan. 15 will not be easy for the government, since the budget includes sums allocated to logistic issues involving the gas agreement.”

After a heated parliamentary session to discuss the deal in March 2019, the government decided to seek an opinion from the Constitutional Court on the deal's legality. In September, the court held in part that the parliament has no say in the deal, because it was signed by two companies. After the court's decision, parliamentarians seized on a no-confidence vote to gain leverage.

The government moved earlier this month to buy some time. On Jan. 5 Razzaz asked members of parliament to postpone discussing the gas agreement until Jan. 19, and they agreed. On Jan. 15, parliament passed the 2020 budget after week-long debates, during which representatives criticized the government over the gas deal.

The Jordanian opposition considered the delay a waste of time. The Enemy’s Gas Is Occupation, a coalition that includes opposition parties, professional and labor syndicates and independent figures, had called on parliament to reject the 2020 budget and to withdraw confidence from Razzaz’s government.

Halima al-Darbashi al-Absi, a member of the campaign, told Al-Monitor, “Parliament can foil the agreement by rejecting the budget, which includes direct allocations related to implementing this catastrophic deal. There are financial allocations for compensation for land acquisitions for the gas pipeline in northern Jordan and indirect allocations related to protecting the pipeline as well as legal consultation fees and salaries of government employees at the Ministry of Energy and Ministry of Finance overseeing this affair.”

Absi further asserted, “Parliament also has the possibility of a vote of no-confidence in Razzaz’s government and to topple his government, which has the constitutional mandate [to cancel the gas agreement] and is directly responsible for implementing the criminal and treacherous deal. This deal supports Zionist terrorism with the money of Jordanian taxpayers, and it has placed Jordan, its security and future, in the hands of Zionists.”

Speaking to Al-Monitor, Abdul Majid Dnaidess, member of the leftist Wihda Party, charged, “The stance of the members of parliament does not express the people’s will, despite their vocal rejection of the gas agreement. The parliament was stripped of its actual role when the executive authority [the government] took over and steered it according to its whims.”

Representing the government, Amjad Rawashdeh, director general of NEPCO, said in a Jan. 5 statement to Petra, Jordan's official news agency, “The contract with the Noble Energy company to import gas to Jordan was the only choice for the kingdom after disruption of Egyptian gas imports. There have been studies on the options available to import gas from neighboring countries through pipelines. Given the regional conditions, [Israeli gas] was the only source available.”

In making the case for importing gas from the Leviathan field, Rawashdeh touted the reliability of importing natural gas through pipelines, the savings realized by skirting transport costs and impacts from oil price fluctuations and the importance of diversifying Jordan's energy sources.

Egypt's supply of gas to Jordan went offline in 2011 due to the bombing of a pipeline in Sinai by radical Islamists and resumed only in early 2019.