By ignoring Supreme Court rulings that are incompatible with their populist messages, Israeli politicians not only offend the rule of law, they undermine the democratic foundations of the state. 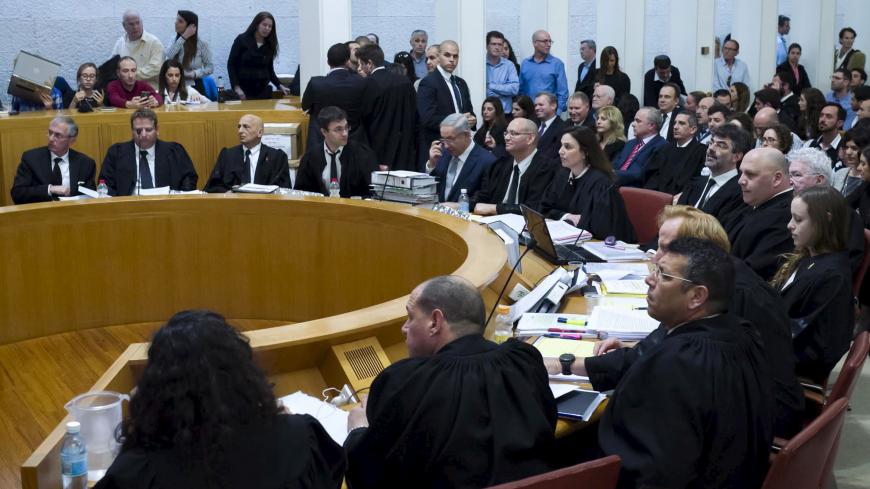 Israeli Supreme Court Justice Hanan Meltzer reprimanded the state March 19 over its continued evasion of the Supreme Court’s instructions to ease overcrowding in the nation’s prisons, saying, “Our verdict was not a recommendation.” His remark reflects the serious undermining of Israeli democracy by disrespect for judicial rulings.

Law-abiding democratic countries uphold the cardinal and obvious principle of respecting and executing the rulings of the courts. Apparently, this is not the case in a state whose prime minister constantly lambasts law enforcement authorities. And former Prime Minister Ehud Olmert, who only recently exchanged his prison garb for civvies, heaps scorn in a new memoir on judges, senior prosecutors and a former state comptroller.

An ordinary citizen who decides to ignore a court ruling knows he stands to pay for it with his freedom or bank account, as well as his reputation. Politicians, on the other hand, view verdicts that are incompatible with their populist messages as opportunities to make headlines. Israeli prime ministers and Cabinet members who make a mockery of court rulings have never had to pay the price, neither at the ballot box nor at the bank.

Thus, for example, none of them were forced to shell out the 20,000 shekels ($5,700) in legal expenses the courts awarded to the Palestinian plaintiffs who petitioned the Supreme Court in 2009 against the planned course of the separation fence between Israel and the West Bank. The same was true for the 50,000 shekels ($14,400) awarded by a lower court to the plaintiffs in an earlier ruling. At a 2009 hearing, then-Chief Justice Dorit Beinisch accused the state of being “a law unto itself.” She, too, found it appropriate to state the obvious: “This court’s verdicts are not by way of being recommendations, and the state is duty-bound to respect and implement them with the speed and efficiency required.”

In a detailed 2010 memo to Attorney General Yehuda Weinstein, former Deputy Attorney General Yehudit Karp listed 11 contempt of court ordinances and Supreme Court rulings by which the state had failed to abide. Such cases, she warned, “raise suspicions that we are not dealing with the random, negligible failings of government bureaucracy, but with a severe phenomenon of [a government] systematically and consciously ignoring its duty to implement judicial verdicts.” Karp, at that time no longer in government, further warned that the problem posed “a real and present danger to democracy, the rule of law and the principle of separation of powers in Israel.”

Issuing instructions in response to Karp’s memorandum, Weinstein wrote that adherence to court verdicts “is a fundamental duty imposed on the state.” He underscored that “implementation of rulings handed down against the government constitutes an essential element in building public confidence in the government and state institutions.”

The reprimand indicates that Weinstein’s directive and Beinisch’s complaint went unheeded by the country’s elected officials and public servants.

How can ordinary citizens be expected to respect court rulings when Knesset member Moti Yogev of HaBayit HaYehudi — the party of Justice Minister Ayelet Shaked — claims certain rulings turned the court from “a pillar of democracy” into a “pillar of massacres” against Israelis. The court caused Israeli soldiers’ deaths by not allowing the immediate destruction of Palestinian attackers’ homes after attacks, he argued. The same party's chair, Education Minister Naftali Bennett, panned a December 2017 Supreme Court ruling that Israeli law does not allow the government to retain the bodies of Palestinian attackers as leverage.

In his essay in the Federalist Papers, Founding Father Alexander Hamilton noted that the proposed structure of the US judiciary does not provide it with any “influence over either the sword or the purse.” The prominent 18th-century thinker and political leader observed even then the wisdom of making the judicial branch dependent on the support of the executive arm of government. However, Israel’s judicial branch finds itself helpless in the face of public figures who at best view its rulings as recommendations and at worst as aiding the enemy. In an April 2016 speech at a conference of the Israel Bar Association, for example, Shaked fired off a barrage of criticism couched as questions about various court rulings. “Which purse exactly should pay for compensation awarded by the court to Palestinians injured during the intifada? Who will take care of the public purse gone empty over the end of the private prisons?"

According to the justice minister’s views, which faithfully represent those of the government, the judges must rely on the power of the people and their choice of representatives tasked with matters of “sword and purse.” These representatives are the same ones who advocate maintaining a Jewish majority in Israel no matter the price. She said so outright in a February speech at a forum called the "Israeli Congress on Judaism and Democracy," arguing, "We need to protect the Jewish character of the state even if that means sacrificing human rights." Shaked isn’t just talk. She is working hard to populate the nation’s top court with judges for whom the sanctity of the state’s Jewish majority takes precedence, even at the cost of human rights.

Judges are not perfect. They, too, make mistakes. However, by its continued court bashing, the right is not just dealing a blow to democracy, but also shooting itself in the foot. Since Israel was established 70 years ago, the Supreme Court has upheld various forms of occupation. It approved numerous laws enabling the expropriation of Arab lands within Israel for the construction of Jewish communities. Judges persistently adopted legal interpretations that allowed the state to establish settlements for Jews only in territories outside its sovereign borders. Generations of Israeli diplomats concealed the rampant injustices of Israel’s 50-year occupation of Palestinian lands behind successive Supreme Court rulings. For years, judges who were accused of being leftist recorded hundreds of rulings rejecting petitions by human rights organizations — to their credit or detriment, depending on the eye of the beholder. Israel cannot boast of being “the only democracy in the Middle East” and at the same time undermine fundamental democratic principles.