An Israeli commando accused of impersonating Israeli journalists to arrest a student on a university campus could make reporters' jobs harder and more dangerous on both sides of the conflict. 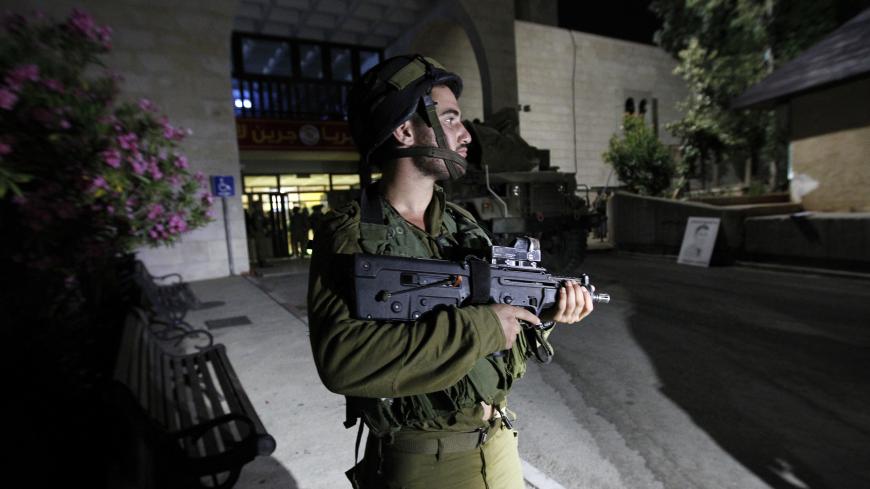 An undercover unit of the Israel Border Police raided the Bir Zeit University campus in the West Bank on March 7 and arrested Omar Al-Kiswani, head of the student council. Al-Kiswani also heads the Hamas-affiliated Al-Wafa Al-Islamiya faction that won the student council elections in 2015. According to witnesses, the Israeli operatives passed themselves off as journalists to trap al-Kiswani. In a video of the event likely shot by a student, four men in civilian clothing are seen wrestling someone to the ground, brandishing guns and dragging him away while uniformed armed Israeli troops wait outside the campus fence.

The reason for sending in a special ops unit and endangering its members to arrest al-Kiswani is not known, but the operation carried out in broad daylight in front of dozens of students drew condemnation by the Union of Journalists in Israel. Chairman Yair Tarchitsky told Al-Monitor that by posing as journalists, the soldiers endangered real journalists doing important work in the field. “The union strongly condemns the abuse of the journalism profession and views it as undermining democratic principles,” he said. “It’s like using ambulances to conduct military operations.”

Tarchitsky's analogy of ambulances being used for nonmedical purposes is an apt one. In the past, Israel has accused the Palestinians of exploiting Red Crescent ambulances to transport weapons or armed combatants. In the most recent such case reported in January, Maj. Gen. Yoav Mordechai, the Coordinator of Government Activity in the Territories, said that by employing an ambulance driver accused of transporting goods to aid terrorism, the Red Crescent is deviating from its humanitarian mission and commitment to neutrality. He demanded the organization fire the driver immediately.

Ambulances and journalists, said Tarchitsky, should not be used for underhanded purposes. “The rules of play must be observed. Journalists, just like sick people and ambulances, should not be part of the game,” he argued.

Following the union's censure, a spokesperson for the military police denied that the unit had posed as journalists, claiming in a statement, “Fighters of the special unit brought about the arrest of the man wanted on suspicion of terror activity against the State of Israel. Prior to his arrest on the university grounds, the fighters merged into the crowd of Palestinians at the site but did not use journalistic cover of any kind whatsoever.”

The police denial notwithstanding, witnesses to the undercover operation at the university claim that not only did the commandos pass themselves off as journalists, al-Kiswani was lured to the campus on the pretext of an interview with reporters. The disguise allowed the force to enter the campus without being identified until its members revealed themselves and detained the student leader.

Whether or not the commandos posed as media representatives, the event's repercussions have been damaging. For years, Israeli journalists have been covering Palestinian affairs in the West Bank and providing the Israeli public with important information about politics, diplomacy, security and the humanitarian situation there. However, they have seen their freedom to work there increasingly curtailed. While most Palestinians used to view the Israeli media, especially reporters covering Palestinian issues, as a conduit for important information to the Israeli public and often even offered their help, the situation has changed.

Asaf Gibor, a reporter and analyst of Arab and Palestinian affairs for the Makor Rishon newspaper and the NRG news site as well as chair of a group of reporters covering Palestinian affairs, confirmed as much to Al-Monitor. “We feel the Palestinians have started viewing us as part of the Israeli defense, military and Shin Bet apparatus. Suddenly, from being a sort of communications channel between Israeli and Palestinian societies, we have turned into suspects or hostile elements coming to operate against them,” said Gibor.

Palestinian suspicions have intensified in recent weeks due to IDF operations to arrest Palestinians in the West Bank, including in area A, which is under Palestinian civil and security control.

Previously, said Gibor, Israeli TV crews would enter Palestinian areas with all their gear and get any help they needed. Now, “You can’t even pull out a mobile phone without appearing suspect and being assailed by a crowd demanding to know your real identity. It’s very hard to operate like that in the field, feeling that you’re increasingly being hemmed in,” he said.

In addition to all the other difficulties inherent to their work, Israeli journalists now risk suspicions of being undercover troops. The loss of Israeli reporting from the West Bank means the loss of one of the last links between Israelis and Palestinians. Without it, mutual demonization will flourish.