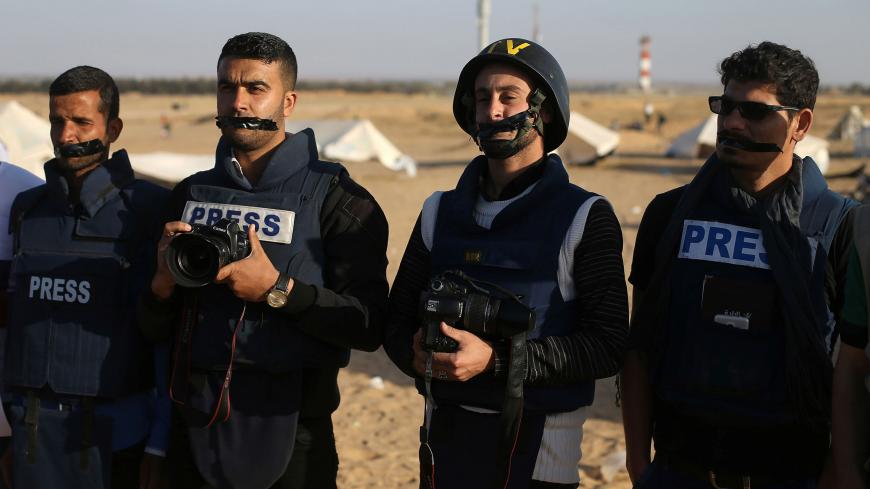 The decision by the Union of Journalists in Israel, chaired by Yair Tarchitsky, to send Israel Defense Forces (IDF) Chief of Staff Lt. Gen. Gadi Eizenkot a letter regarding the death of a Palestinian journalist is not, by most accounts, a big deal. Nevertheless, the April 7 letter, which Tarchitsky delivered to Eizenkot, has been welcomed in Palestinian media. It was prominently featured by the widely read Maan News on April 7.

The union’s spokesperson, Noah Zlotnik, provided Al-Monitor with a copy of the letter in Hebrew, in which the syndicate requests that the army investigate the killing of Yasser Murtaja, by Israeli soldiers. He was shot on April 6 and died the following day. “We are convinced that the IDF share democratic values, including the importance of freedom of the press,” the letter reads.

Speaking to Al-Monitor by phone, Zlotnik reiterated that the union is concerned about freedom of expression, not only the rights of journalists as professionals. Regarding the latter, she stressed the belief that journalists, no matter their background, should not be targeted by the army. “No matter where they are from, be they Israeli, Palestinian or Norwegian, soldiers should know how to act and behave toward them.”

Ori Nir, the spokesperson for Americans for Peace Now and a former Israeli reporter who covered the occupied Palestinian territories during the first intifada, told Al-Monitor that the photos and videos coming out of Gaza cannot be disregarded. “The video and images clearly show six or seven journalists dressed as reporters [wearing vests marked 'PRESS'] and were shot on the same day. One of them was shot dead,” Nir remarked.

An Israeli reporter who requested anonymity told Al-Monitor that the reason why journalists were targeted that particular week, unlike the previous week during protests, might be connected to concerns about being targeted by international institutions.

In an April 8 statement, International Court of Justice (ICC) prosecutor Fatou Bensouda said, “It is with grave concern that I note the violence and deteriorating situation in the Gaza Strip in the context of recent mass demonstrations." The reporter said that the photographers who were shot were using long-range camera lenses. The soldiers were probably afraid of being recognized and eventually questioned. They perhaps fired in the hope of deterring photographers from coming too close and taking pictures, the reporter noted.

Jack Khoury, a senior reporter with the Israeli daily Haaretz, told Al-Monitor that while the letter to the army is important, the union is not the main body representing journalists. “The main union, the Israeli Journalists Union, has remained silent about the attacks on Palestinian journalists,” Khoury said.

A number of international press organizations issued strongly worded statements, demanding an official Israeli investigation into the April killing and injury of journalists. The Vienna-based International Press Institute (IPI) called on April 9 for Israel to look into Murtaja's death. (Full disclosure: The author of this article is a member of the IPI executive board.)

Ravi R. Prasad, the head of advocacy for IPI, remarked in a statement, “We urge the government to set an example by investigating the killing of Murtaja and charging those responsible for the reprehensible act. It is unacceptable that journalists are being targeted for doing their duty.”

On April 9, IPI reported that based on its Death Watch project, which tallies journalists killed while working, “As many as nine journalists have been killed in Palestine in the last six years. All these journalists were either killed in artillery fire or shot while on assignment. In most cases no investigations have been conducted and as a result no one has been charged with these killings.”

The Foreign Press Association in Israel has also called on the Israeli army to properly investigate the shootings. The association issued a release on April 7, stating, “The FPA expresses its deep sympathy over the death of Gaza journalist Yasser Murtaja, who was fatally shot while covering a border demonstration in Gaza yesterday. We urge the army to show restraint in areas where journalists are operating and to conduct a fast and open investigation into this incident.”

Not a single Israeli soldier or civilian has been reported injured since the Palestinians' campaign began on Land Day, March 30, in Gaza.

The Israeli army temporarily assumed responsibility for the shootings of unarmed Palestinian demonstrators in Gaza, asserting that its soldiers had acted in an appropriate, measured way. The IDF spokesman tweeted on March 31, “Yesterday we saw 30,000 people; we arrived prepared and with precise reinforcements. Nothing was carried out uncontrolled; everything was accurate and measured, and we know where every bullet landed.” The tweet was later deleted, but not before being saved by the Israeli human rights organization B’Tselem.

Under pressure, Israel announced on April 7 that it planned to investigate Murtaja's death. Few Palestinians believe the investigation will be neutral. In September 2016, B’Tselem published the report “Whitewash Protocol: The So-Called Investigation of Operation Protective Edge.” B’Tselem concluded that Israeli army investigations’ “main concern is with creating the false appearance of a functioning system which allegedly strives to get at the truth, while in fact, the investigations are perfunctory examinations of isolated, decontextualized incidents, while the people who are truly responsible for the violation are never investigated.”

Shooting at unarmed civilians violates Israel’s own standing orders and is also a violation of international humanitarian law. Israel does not recognize Palestinian journalists as professionals and does not distinguish between demonstrators and photographers.