The EU’s plans to save Gaza

European diplomats say that the European Union is now preparing a set of proposed moves to calm down tensions in the Gaza Strip and avoid a violent Palestinian outbreak at the end of President Mahmoud Abbas' era. 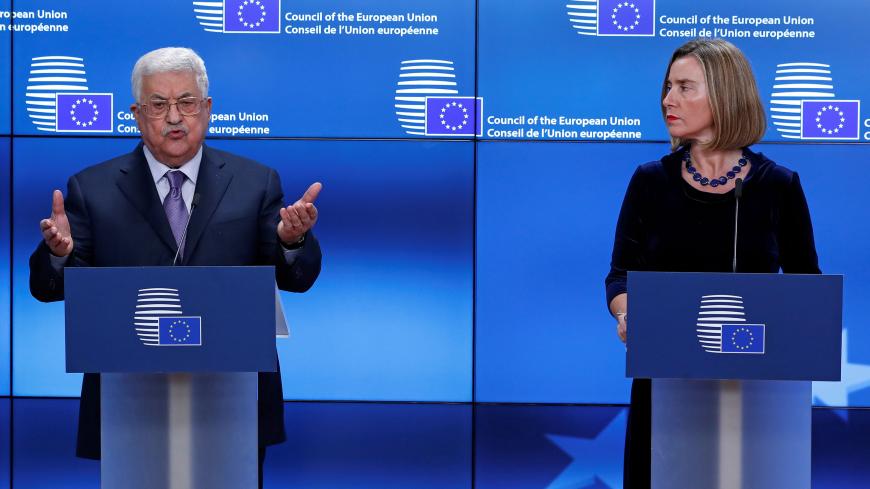 European Union officials in Brussels are alarmed over the political crisis in Ramallah and the humanitarian crisis in the Gaza Strip, especially considering US policy in the region and the move of the US Embassy to Jerusalem in May. A senior EU official close to High Representative for Foreign Affairs and Security Policy Federica Mogherini defined May as “the month of violence.” Speaking on condition of anonymity, the official said, “It seems very difficult to prevent an outburst of Palestinian violence given several factors.”

According to the official, Palestinian President Mahmoud Abbas’ punitive economic measures against the Gaza Strip and Hamas have turned the humanitarian crisis in Gaza into a powder keg ready to explode. To that she added the 70-year anniversary of what the Palestinians call Nakba Day on May 15, which commemorates the 1948 Palestinian exodus. The official noted that given the various investigations Prime Minister Benjamin Netanyahu is undergoing, Netanyahu wishes to be perceived in Israel as Mr. Security. This could also trigger provocative actions.

Reports received lately by the EU indicate that violent outbreak could take various forms. It could be terror attacks by Hamas and its allies against Israelis on a much larger scale and intensity than in recent years. Another possibility is an uprising by Gaza residents along the fence with Israel directed also against Hamas, or even a full clash in Gaza between Hamas and Israel. Also, one cannot rule out that there will be elements inside Fatah that may attempt to launch an armed intifada.

On the background of these threats, the EU has been consulting with its member states, especially with new German Foreign Minister Heiko Maas and French Foreign Minister Jean-Yves Le Drian, attempting to stabilize the situation.

Several measures in that direction are being considered by EU policy planners. These include a humanitarian rescue package to Gaza led by the donors’ community in coordination with Norway and supervised by Mogherini. The EU is also holding deliberations with the US administration to prevent any cut in aid to the Palestinians, as proposed by US President Donald Trump.

In this context, according to the EU official, Brussels is deeply concerned by the appointment of John Bolton as national security adviser to Trump. Bolton is well-known in EU diplomatic circles from his time as US envoy to the United Nations. He is perceived by the EU as an extreme foreign policy hawk, even right of Trump. It is no secret that Bolton is firmly opposed to the Iran nuclear deal and is in favor of the United States pulling out, rather than rectifying it. He objects to negotiations with North Korea, and on Israel and the Palestinians, he holds views close to pro-settler HaBayit HaYehudi leader Naftali Bennett.

This appointment and the replacement of Rex Tillerson by Mike Pompeo as secretary of state, pending confirmation hearings, have diminished any hope in Brussels that Washington will propose any realistic peace plan for the region.

The EU will therefore act on its own, in some consultation with Moscow and Washington, to assist Abbas in maintaining stability in the weeks and months to come.

A senior PLO official close to Abbas told Al-Monitor that Ramallah has heard from Brussels about their concern. The Palestinian leadership promised the EU that Abbas is firmly committed to preventing violence this spring despite the looming provocations. Abbas is in favor of maintaining the security cooperation with Israel. The PLO official said that Abbas has virtually given up on real reconciliation with Hamas (after the assassination attempt of Prime Minister Rami Hamdallah and security chief Majid Faraj) and is still trying to convince the EU together with Egypt and Saudi Arabia to work in favor of an international peace conference in 2018 on a two-state solution based on the 2002 Arab Peace Initiative.

According to the official, Abbas is looking both at his legacy and his succession. He is looking at veteran Fatah officials and officers to eventually take his position, and also possibly to split up his various functions between several leaders — the roles of Palestinian president, chairman of the PLO and chairman of the Fatah Executive Committee. In terms of his legacy, Abbas wants to link the diplomatic path started by PLO leader Yasser Arafat and his own continuous diplomatic efforts, while refusing any compromise on the Palestinian positions. It is important for Abbas to be remembered as standing up to international pressure. In fact, the more his relations with Washington worsen, his relationship with the EU improves.

A senior Israeli Ministry of Foreign Affairs official commented to Al-Monitor about the views of Brussels, saying that the Europeans feel isolated and frustrated on all regional issues, primarily on the Iran deal and on Israeli-Palestinian peace. Netanyahu, he said, will pursue his close coordination on the matters solely with Trump.