The story behind Israel's 2007 attack on Syria's nuclear reactor challenges the assumption that Israeli generals are more competent than Israeli politicians at making security decisions. 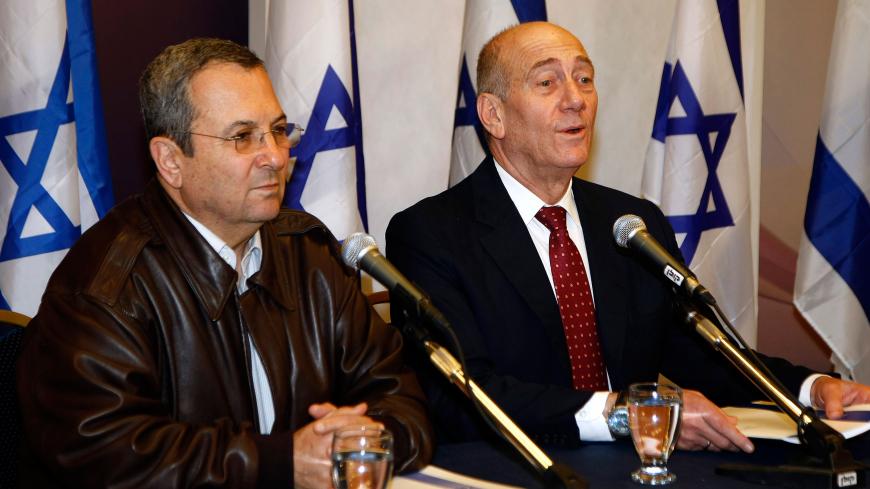 Israeli Prime Minister Ehud Olmert (R) sits next to Defense Minister Ehud Barak before issuing a statement at the end of a meeting of Israel's Security Cabinet in Tel Aviv, Jan. 17, 2009. - REUTERS/Paul Hanna

On March 21, Al-Monitor and the Israeli press broke the story of Israel admitting that jets from the Israel Defense Forces (IDF) had destroyed the Syrian nuclear reactor at Deir ez-Zor in September 2007. Soon after publication, a battle of versions began as to who had been responsible for the decision to attack.

When the dust finally settles after this week’s embarrassing jostling over credit for the operation, the notion that Israel is best led by someone who used to be a general will be dispelled forever. Following a day of battling versions and public squabbling between the two Ehuds — former Prime Minister Ehud Olmert and former Defense Minister and Prime Minister Ehud Barak — it turns out that Lt. Gen. Barak had actually sought to delay the airstrike.

Olmert’s rendition of events, laid out at length in his newly published memoir, is not the only version of Barak’s reluctance to approve the bombing. According to almost everyone at the nexus of decision-making in those days, Olmert had bravely led the attack plan, knowing that it could embroil Israel in a bloody war, while Barak, the vaunted military commander, was the one trying hardest to rein him in.

Barak had only become defense minister in June 2007, after winning the Labor Party primaries. Until then, the person shepherding the attack plan alongside Olmert had not been a general either. Olmert's defense minister was another politician, Labor Party leader Amir Peretz. Furthermore, the public standing of these two civilians was at a record low for their alleged failures in conducting the Second Lebanon War, in summer 2006. The ridicule to which Peretz was subjected peaked some six months later when a video surfaced showing him, surrounded by the country’s top brass, peering into a pair of binoculars with the lens caps on during a military exercise on the Golan Heights. That photo “proved” that Israel had been led during the war by a clueless defense chief whose military inexperience and lack of understanding were the main cause of its flawed handling.

The alleged military failure of these two men was the backdrop for the political comeback engineered that same year by Barak, the former military chief of staff, defense minister and prime minister. Barak, the most decorated soldier in the annals of the IDF, was perceived as the antithesis of Olmert, whose military career consisted of reporting for an army magazine, and Peretz, who served as a lowly maintenance officer.

Now, it transpires that Olmert was the one who adopted one of the toughest defense decisions ever made by an Israeli prime minister. Even without his boastful interviews in recent days promoting his book, the public and the media would have given Olmert full credit for the way he made the decision to raze the reactor and oversaw its implementation.

While Peretz had taken part in the decision-making, he was ultimately forced to bow out in humiliation after being ousted in his party's primaries. The reporting in recent days has done him proud, albeit somewhat after the fact. The justified credit he was given after his forced departure from office for the decision to forge ahead with the development of the Iron Dome anti-missile defense proves that despite his lack of defense experience, he knew how to make wise and courageous decisions of great importance. Overruling IDF objections and despite the Finance Ministry’s refusal to allocate the necessary budget, Peretz stood his ground. Barak, his successor, carried on with the project, but Peretz, who, as mentioned was a weakened incumbent and an outsider in defense circles, nonetheless stood up to the generals and other experts, something that can hardly be taken for granted.

Barak was perceived at the time as the responsible adult who rebuilt the country’s military deterrence after the failure of the Second Lebanon War, but the picture painted in recent days of his conduct in the Syrian reactor affair is troubling. Olmert in his book describes the tensions that developed behind closed doors when Barak assumed the position of defense minister and was presented with an operational attack plan given the assessment that the plutonium reactor would soon go on line: “The participants were very quickly surprised to hear the new defense minister raising questions about the need for military action to demolish the reactor. … During one of the discussions, he even remarked that he could not understand why everyone was so stressed. After all, the operation could wait until the following spring [of 2008]. …The meeting participants were stunned. According to intelligence data, by that point the reactor would be ‘hot’. What’s the problem, Barak asked. So we’ll destroy a hot reactor.”

Barak, for his part, claims he acted responsibly in dealing with the inexperienced Olmert’s frenetic activity, given that the prime minister had already gone to war the previous year without meaning to. The “inexperienced” Olmert, however, deserves credit for standing his ground despite Barak’s warnings and reservations and for not feeling “inferior” to the decorated general who had logged decades of experience in making sensitive decisions on matters of defense.

Barak was not the only one to whom Olmert bravely stood up. He also held his ground against the United States after President George W. Bush made clear that the US military would not attack the Syrian nuclear facility, an option Olmert had proposed. Olmert in his book describes the dramatic conversation with Bush: “I respect your explanations but we will do what needs to be done. … I did not question, I did not ask, I did not wait for approval. I said unequivocally: You are not going to? OK. We are!”

Israel has twice destroyed nuclear reactors in operations that could have led to war. In 1981, when Prime Minister Menachem Begin decided to bomb Iraq’s nuclear reactor, and in 2007, when Olmert ordered the destruction of the Syrian facility. Begin, like Olmert, was considered an outsider by the defense establishment, and his military record boiled down to his service as a soldier in the Polish army. Begin commanded the pre-state resistance group Irgun, but did not serve in the IDF. Like Olmert, Begin had proceeded without US backup.

Various pundits have interpreted the decision to lift the lid on the 2007 bombing at this time as serving the interests of Prime Minister Benjamin Netanyahu, widely viewed as “Mr. Defense,” in highlighting the Iranian nuclear threat. The sequence of events in 2007 proves, however, that it doesn’t take a general to make decisions of great magnitude. With various political parties now chasing after former military chiefs of staff, such as Lt. Gen. Benny Gantz and his predecessor, Lt. Gen. Gabi Ashkenazi, to join their ranks and boost their defense credentials, it turns out that a prime minister with a non-military resume, personal courage and ability to make decisions can be preferable to a general.