Top officials in Netanyahu's party kept in the dark

Uncertainty within the Likud Party is growing as Prime Minister Benjamin Netanyahu does not share with party seniors his plans to deal with the coalition crisis or with police investigations against him. 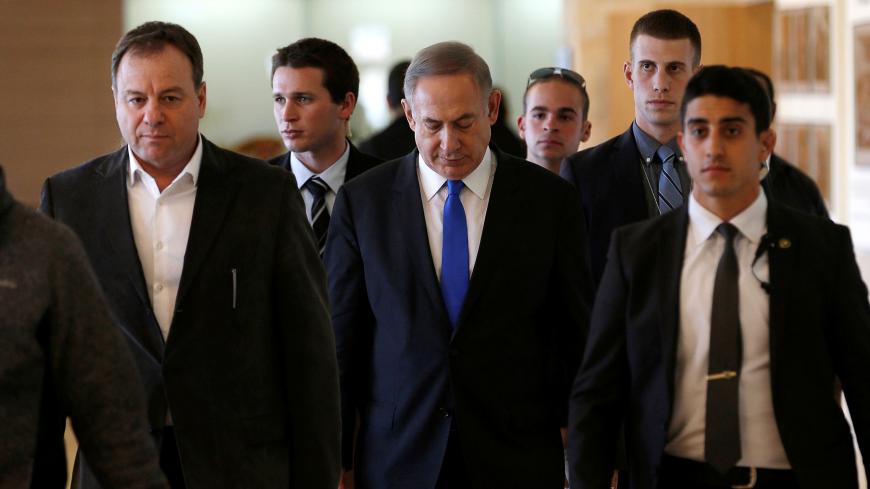 “Netanyahu is like a wounded bull in the ring. We have to watch out for his horns because he is very dangerous now. In his downward spiral, he could bring everyone down with him. He could lead us to new elections. He is unpredictable.” This was the analysis of one senior Likud official on March 5. The official spoke with Al-Monitor on condition of anonymity about an hour after it was first learned that Netanyahu’s former adviser Nir Hefetz was recruited as a state witness in the criminal case against the prime minister. This analysis reflects the mood of uncertainty pervading the ruling party.

Headlines on all of the news sites said Hefetz claimed Netanyahu's son Yair and his wife, Sara, pressured Netanyahu into making decisions harmful to state security. At the same time, Likud Knesset members and ministers were trying to figure out where all of this was leading. Most importantly, they wanted to know whether the emergence of a third state witness against Netanyahu made it even more likely that elections would be moved up to June.

Until just a few days ago, this very real possibility wasn’t even a consideration. It was first tossed out March 3, apparently by Netanyahu’s inner circle, moments before he set off for his official visit to Washington. Ostensibly, the crisis resulted from an ultimatum by the ultra-Orthodox parties, who threatened to topple the government if their enlistment law (exempting ultra-Orthodox young people from the draft) was not approved before the 2019 budget. Finance Minister Moshe Kahlon is vehemently opposed to that.

Netanyahu doesn’t seem to be making any effort to resolve the crisis, and that would be putting it mildly. While he did not instigate the crisis, he did recognize how beneficial it could be to him. Holding a flash election in three months, when his status in the polls is excellent and before it is decided whether to indict him for the various scandals, could send him back to the Knesset as a winner for the fifth time. It would also give him a chance to prove to Attorney General Avichai Mandelblit that despite all the investigations, the public still supports him.

The possibility of moving the election up came as a complete surprise to senior Likud officials. These days, very few of them talk directly with Netanyahu. Tourism Minister Yariv Levin may be the only one who advises him. Everyone else is excluded to various degrees. In the past, Netanyahu made a point of calling them, consulting with them or asking them to give an interview for him. This allowed them to feel his pulse and make an educated guess about what he was planning. But that hasn’t happened in the Likud for a very long time now. Netanyahu is described as being in the grip of paranoia now that his advisers have crossed the lines and provided police interrogators with material that could incriminate him. The way Netanyahu sees it, they all have personal interests now. Even the few who still defend him in the media are regarded by him with suspicion.

On March 5, Likud Knesset members roamed the Knesset’s halls trying to collect information from members of the other parties, including the ultra-Orthodox, HaBayit HaYehudi and Kulanu. Is some resolution to the crisis with the ultra-Orthodox in sight? How involved is Netanyahu in trying to resolve it? They tried to get into Netanyahu’s head and anticipate his next moves.

Speaking with Al-Monitor, one Likud Knesset member offered his assessment that once Netanyahu returns from Washington he will take steps to advance the elections. Another Knesset member suggested that it would not be wise for Netanyahu to risk what he already has in hand and that elections always come with a huge element of uncertainty. A third admitted that ever since the last election in 2015 Netanyahu has become isolated, unpredictable and uninhibited, so there is no way of knowing what he will do next. Another senior official expressed his amazement that the prime minister could still manage to keep such a high-profile political agenda, including a meeting with US President Donald Trump, while the ground is slipping out from under his feet. One thing is clear: The fate of other Likud members is tied up with that of Netanyahu, but their ability to impact the situation is severely limited.

In some strange way, the uncertainty surrounding Netanyahu's moves and the realization that he is acting on borrowed time has not resulted in any new alliances within the Likud. In the past, various Likud members organized to oppose Netanyahu. Just before the last election, there was even an effort to remove him. What is particularly conspicuous about the current situation is that all the senior Likud members are proceeding with extreme caution. It is every man for himself now. Everyone has their own ideas about what to do. Should Netanyahu find out about any meeting or consultation, he could immediately interpret it as a conspiracy against him. Netanyahu is still a powerful prime minister, among the public in general and among Likud supporters in particular. There is still a possibility that he will be re-elected, and then their fate lies in his hands.

Netanyahu created this balance of terror over the years. He made sure to block any Likud minister who began to garner the type of popularity that Netanyahu considered a threat. Even former Minister Gideon Saar, who is frequently mentioned along with Transportation Minister Yisrael Katz as a potential successor to Netanyahu, does not dare to break ranks. Saar may now be a political outsider who does not rely on Netanyahu. On the other hand, he also knows the prime minister is still powerful enough to be re-elected and could deliver a deathblow to Saar's comeback should he try to return to the political game.

That is why even if it appears that Netanyahu is nearing the end of his political career, the war of succession has yet to begin. In that sense, even Katz is acting wisely, maintaining industrial silence. On occasion, he will even support the prime minister in the media. In other words, he is not manufacturing opposition to Netanyahu.

All the top Likud officials who spoke with Al-Monitor said that if the elections are moved up because of the enlistment law crisis, then they will need to align themselves with Netanyahu because this crisis has seemingly created a valid reason for early elections. On the other hand, if Netanyahu drags them into primaries because of some personal whim, they will revolt against him. Still, some of them are trying to find something good in the current situation. They say that if Netanyahu leads the Likud to good results in the next election, it will allow them to remain in power — even if he is forced to resign later on.

What is happening now is unlike anything that we have seen over the past few weeks. The realization is spreading deep within the Likud that the man who chaired their party for years probably will not be able to extricate himself from his entanglement in criminal activities. If that is indeed the case, the current political situation is about to undergo significant changes.