Without an alliance between them, Prime Minister Benjamin Netanyahu will not be able to form the next government and the ultra-Orthodox might find themselves in the opposition. 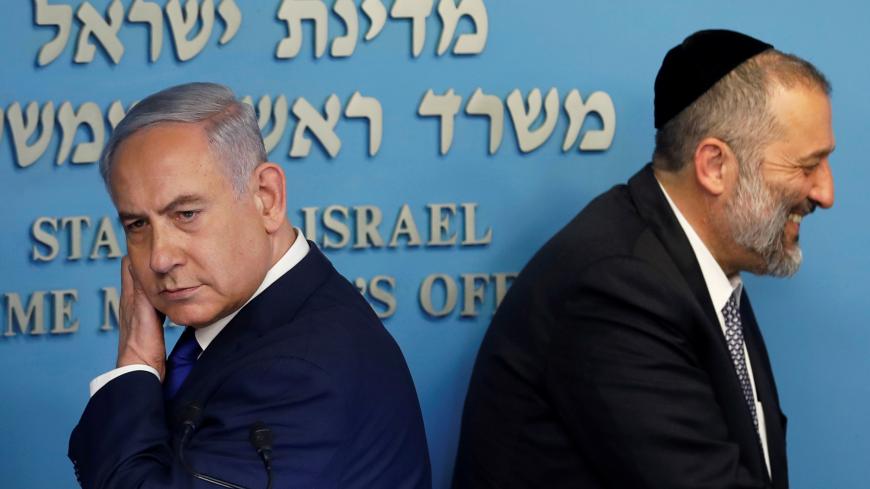 Israeli Prime Minister Benjamin Netanyahu and Israeli Interior Minister Aryeh Deri are seen at the end of a news conference at the Prime Minister's office in Jerusalem April 2, 2018. - REUTERS/Ronen Zvulun

In the days preceding the dissolution of the Knesset in late May, Prime Minister Benjamin Netanyahu checked with the heads of the ultra-Orthodox parties to see whether they would back this move. While Chairman of Yisrael Beitenu Avigdor Liberman was adding more and more obstacles to the coalition negotiations, Netanyahu was preparing for the possibility that he would not have a government by the legal deadline. That was when the option of dissolving the Knesset was first put openly on the table in the most concrete terms. “He didn’t want to reach a situation in which the president asks [Blue and White head] Benny Gantz to form a government, and was concerned that the Likud might do something to remove him. That was why he wanted to make sure that we would support his decision to dissolve the Knesset under any circumstances. We promised him that we were right there with him,” a senior official from ultra-Orthodox party Shas told Al-Monitor on condition of anonymity.

Everyone knows what happened next. Despite all assessments, on the night of May 30, the Knesset took the unprecedented step of dissolving itself just one month after its members were sworn in. There were 74 Knesset members, including 16 from ultra-Orthodox parties Shas and Yahadut HaTorah, who kept their promise to Netanyahu and voted to support the dissolution of the Knesset. The generous coalition agreements, which were supposed to be signed with them, included billions of shekels and numerous positions of power in the government and Knesset committees. All at once, these agreements were junked.

Immediately after the vote, Shas Chairman Aryeh Deri made an emotional statement saying that he had to apologize to Netanyahu, whom, he claimed, believed correctly that Liberman intended to stay out of the coalition, while he tried to convince the prime minister that Liberman would eventually give in and join. “I was wrong about this and the prime minister was right. Turns out that I did not know Liberman well enough,” Deri said.

Once the Knesset was dissolved, a senior official in Netanyahu’s office told Al-Monitor that the prime minister was spared a putsch. According to him, had Netanyahu failed to dissolve the Knesset, he would have lost his position as prime minister.

That same dramatic night saw the end of the close friendship between Deri and Liberman, which dated back over two decades, to Netanyahu’s first government in the 1990s. At the time, Deri was the omnipotent chairman of Shas, while Liberman was the all-powerful director general of the prime minister’s office. Back then, Liberman refused to abandon Deri, even when he went to prison (2000-2002) and even visited him behind bars.

In contrast, that same night saw the strengthening of the alliance between Netanyahu and the ultra-Orthodox, after it had undergone a serious test. The ultra-Orthodox parties walked away from the election with an unprecedented 16 seats. Nevertheless, they voted to dissolve the Knesset, knowing that they may not be able to repeat that remarkable achievement.

One Shas member of Knesset told Al-Monitor on condition of anonymity that the decision by the ultra-Orthodox parties to support dissolving the Knesset was calculated. They were not just following Netanyahu blindly, he insisted. “It’s true that we have an alliance with him, but we are not suicidal. The fact is that we had no other option. We would not sit with [Blue and White senior] Lapid, and there was no other government for us. We are not worried about another election, because we will get the same number of seats. The election is scheduled to take place two weeks before the Jewish New Year, when the ultra-Orthodox community will be much more motivated emotionally and much more eager to vote.”

Over the years, the ultra-Orthodox parties have proven that they are politically pragmatic, which is why the Shas Knesset member quoted here is correct. Theoretically, the ultra-Orthodox could have been part of an initiative to have another member of the Likud form a government, but they never even considered the possibility. They realized that they don’t have too many options, given what Liberman did.

The alliance between Netanyahu and the ultra-Orthodox was renewed in 2009. This followed several years of bad blood as a result of the harsh economic reforms that Netanyahu initiated as finance minister in 2003, and which included dramatic cuts to child support budgets. Large families in the ultra-Orthodox and Arab sectors were the first to suffer.

Netanyahu courted the ultra-Orthodox intensely before the 2009 election. When he promised to restore their child support budgets, he received their support — and he kept his promise. The bond between them has only gotten stronger since then. When they were left out of his government in 2013, it was only because of the alliance between Lapid and then-HaBayit HaYehudi leader Naftali Bennett. It was under this government that Lapid passed a law for the enlistment of the ultra-Orthodox. For Netanyahu, out of all his governments, this was the one he hated the most. It fell apart two years later.

After the 2015 election, Netanyahu restored the ultra-Orthodox to his government and overturned Lapid’s Enlistment Law, which the ultra-Orthodox considered an “evil decree.” He also gave them cushy budgets and positions, and they reciprocated with absolute loyalty.

Beyond that, Netanyahu has become a very powerful political brand among the ultra-Orthodox sector over the past few years. “Netanyahu is very popular in our community,” said the Shas Knesset member. “We moved to the right politically — like everyone else — so we see no alternative to Netanyahu. He has a good relationship with President Donald Trump too, which helps. He is also being persecuted, which is something else we have in common, because the ultra-Orthodox feel like they are persecuted too [blamed for not sharing the national burden of enlistment and being part of the workforce]. In other words, we identify with him.”

Senior officials in Shas and Yahadut HaTorah are keeping close watch on Liberman’s every move and coordinating with Netanyahu as to how they will deal with him in the election campaign. A senior member of Yahadut HaTorah told Al-Monitor on condition of anonymity, “Liberman wants us to attack him, because that’s how he got to be so big. We will not play into his hands. We are keeping a low profile in dealing with him. That’s the same message we got from Netanyahu. He told us to leave Liberman to him.”

The big question is what will happen to the alliance between Netanyahu and the ultra-Orthodox, given the prime minister’s tenuous legal and political status. The same senior Shas official said, “We’re not blind, but we believe that despite the indictments that Netanyahu is facing, there is a good chance that he will be able to form a new government after the next election. Right now, we are with him. We get the feeling that he is also powerful in the Likud, and that they will not depose him. We’ll make the necessary decisions when the time comes.”