The Iranian authorities’ move to ban import orders registered in US dollars presents yet another challenge for the private sector. 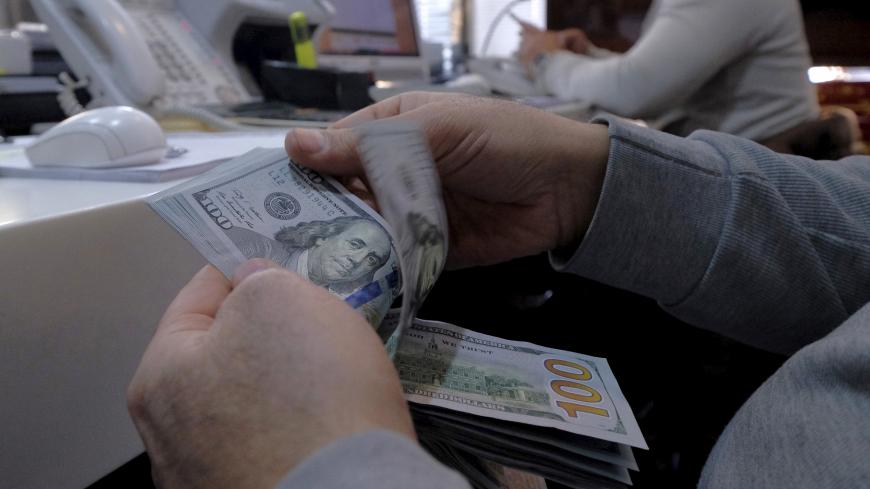 A money changer counts out US dollars for a customer, Tehran, Iran, Jan. 20, 2016. - REUTERS/Raheb Homavandi

A little over two weeks ago, Iran eliminated another function of the US dollar in its internal workings in a move positioned amid yearslong plans to reduce dependency on the greenback. The consequences will be manifold and interconnected, but there are discrepancies in views concerning what will happen as a result among experts and officials.

On Feb. 28, the Ministry of Industry, Mine and Trade announced by way of a directive that all traders are henceforth barred from registering their import orders in US dollars. The abrupt directive that is effective immediately was put into motion per a government request conveyed through a letter penned by Central Bank of Iran (CBI) head Valiollah Seif.

In the missive, Seif argued that since Iran’s banking system has no access to dollar transactions because of decadeslong sanctions, using the currency in imports translates into having to employ a network of foreign exchange bureaus instead of banks while also going against the country’s policy of “completely removing the dollar” from its international business dealings. The latter is indeed a policy that Iran is pursuing on several fronts.

For instance, Tehran is actively seeking bilateral or multilateral currency swap deals with its chief trade partners and has already one in place with Turkey. Furthermore, it previously announced a plan to halt the use of US dollars as the currency of choice in financial and foreign exchange reports from the beginning of the current Iranian year (ending March 20). But that plan ended up being postponed because a sudden break with the greenback was not deemed feasible as oil revenues are priced in US dollars, though it remains on the CBI’s agenda.

Going back to the latest manifestation of the Hassan Rouhani administration’s policy of doing away with the greenback, shortly after the announcement of the ban on imports in dollars, Mehdi Kasraei-Pour, CBI’s deputy for foreign exchange policies and regulations, asserted that it will have “no impact” on the country’s imports. “Importers must only ask their foreign counterparts to offer their pro forma invoices in other currencies and use alternative currencies such as the euro for their purchases,” he said.

But much of the private sector — whose players bear the brunt of the measure — holds a different opinion.

Farhad Ehteshamzad, head of Iran's Auto Importer's Association, said the CBI has no problem in switching to other currencies quickly, but that the private sector’s case is different as many foreign counterparts looking to export their goods to Iran still use the US dollar as the basis of their pro forma invoices and are less than enthusiastic about the notion of having to employ other currencies.

“The exchange rate of the dollar to other currencies will now be added as another challenge for importers and another factor further contributing to the currency rate fluctuations,” Ehteshamzad told Al-Monitor, noting that traders will now face additional finished costs of doing business as they will have to shoulder the added expenses of changing currencies.

The rate fluctuations Ehteshamzad was referring to have gripped Iran’s markets during the past few months, surprising all from officials to pundits to the general public. They began prior to the winter holidays and were first explained by the CBI as natural seasonal demand that increases rates around the same time each year. But other currencies kept on gaining against the Iranian rial, and the US dollar — which was traded for around 40,000 rials in December — was quoted for an all-time high of close to 50,000 rials in late February. The euro, Iran’s currency of choice to replace the US dollar, also scaled new heights of 62,000 rials.

In response to the turmoil, the CBI mounted a wide-scale intervention in the currency market with the help of law enforcement, which cracked down on some traders and middlemen — police vehicles stationed outside currency trade hubs in downtown Tehran are now a familiar sight. Meanwhile, to absorb liquidity, it authorized higher bank interest rates after only recently having brought them down to 15%; banks were temporarily allowed to sell one-year deposit certificates paying 20% in annual interest. This reportedly managed to attract a staggering 2.4 quadrillion rials ($63.7 billion) in only two weeks.

But now, less than a month after the intervention, the US dollar still trades for around 48,000 rials, perhaps heralding a new reality where, regardless of government intervention, open market rates will remain considerably higher than the official rate.

In this vein, Ehteshamzad advocates for the government to move away from its current stance of “not accepting real conditions” while engaging with markets by way of force and rather adopt moves consulted and coordinated with the private sector.

“We want the government to embrace the real conditions in the economy and make international relations more transparent, give the CBI its independence and move toward freeing the currency rates,” he noted. Ehteshamzad also criticized the dollar imports ban because of its sudden unveiling and because it effectively undermines two articles of Iran’s law of continuously improving the climate of doing business, which clearly obligate the administration and its executive bodies to consult with and take into account the opinions of the private sector and their affiliated entities.

According to Iran’s Customs Administration, about $47.6 billion worth of goods were imported during the first 11 months of the current Iranian year. China, the United Arab Emirates, South Korea, Turkey and India were among the biggest trade partners, while goods imported directly from the United States accounted for less than 1%.

However, even as there are no official statistics on just how big a role the greenback plays in Iran’s imports, Ehteshamzad said that “we cannot ignore the dollar’s share” and noted that the UAE, which deals with Iran with the dollar, emerges as the most problematic piece in the puzzle.

Indeed, there is another potentially troublesome dimension to the dollar imports ban, and that is the probability of the already high volume of smuggling continuing to rise as a result. Ehteshamzad said, “Smuggled goods constitute a share of higher than 50% of imports and putting more restrictions on official points of entry can lead to increased contraband.”