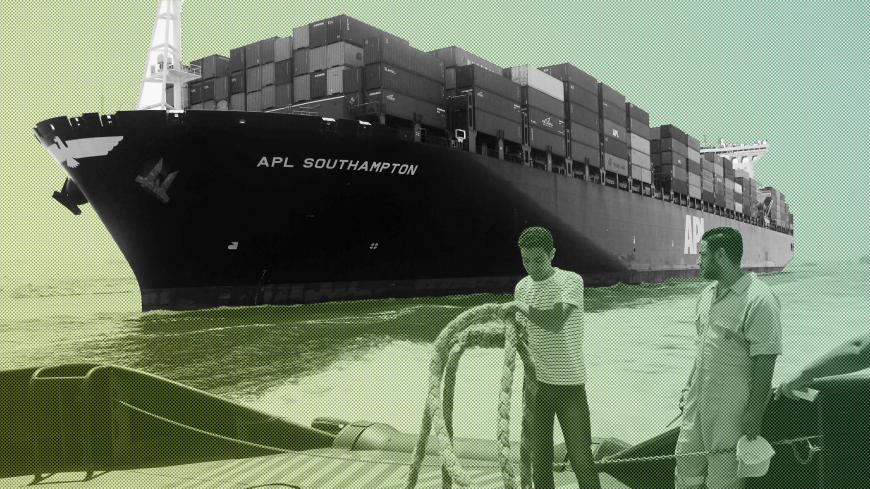 Employees work on a boat in front of a container ship as they are both crossing the new waterway of the Suez Canal, Egypt, July 25, 2015. - AFP/Getty Images

Egyptian exports to Turkey jumped by 38.5% in 2017 compared to 2016, despite the political clash that has pitted the two countries against each other over the past few years.

In a March 11 statement, the Egyptian Ministry of Trade and Industry said that​ “Egypt’s trade deficit with Turkey fell 72% to reach $360 million in 2017, thanks to a boost in the exports of chemicals, textiles and plastics.”

“Export growth to the Turkish market last year is due to a boost in Egyptian shipments of chemicals by 89%, textiles and ready-made garments by 23%, and plastics and rubber by 31% — which together make up around 80% of total Egyptian exports to Turkey,” head of the Egyptian Commercial Service Ahmed Antar said, according to the ministry’s statement.

“The increase in Egyptian exports to Turkey is the product of a change in the country’s monetary policies and a focus on pushing up exports through leveling the quality of the Egyptian product,” Bassant Fahmy, an economist and a member of the Egyptian parliamentary Economic Affairs Committee, told Al-Monitor.

“Egypt’s growing exports to Turkey is also a pointer that the government does not mix politics with economy,” Fahmy noted. She said that Egypt’s political disagreements with Turkey have never affected the two countries’ economic ties. “This proves that Egypt is open to all investors and committed to create an investment-friendly environment in the country,” she added.

In February, Minister of Trade and Industry Tarek Kabil met in Cairo with a delegation of Turkish businessmen, headed by the president of the Union of Chambers of Commodity Exchanges of Turkey, Rifat Hisarciklioglu, to get acquainted with their problems in Egypt and find ways to solve them.

During the meeting, Kabil promised to uproot all hurdles facing Turkish investors in Egypt, while Hisarciklioglu expressed the Turkish investors’ desire to invest in Egypt in the coming period. “Turkish businessmen seek to pump new investments worth $1 billion into Egypt in 2018 and in the first half of 2019,” media reports noted.

Hisarciklioglu had attended the joint Egyptian-Turkish Business Forum held in Cairo in January 2016.

“Egypt’s strategy in dealing with Turkish investors and businesspeople is excellent. Politics should never affect economies. On the contrary, politics should be used to boost any country’s economy,” Ahmed Koura, an economist and the former head of Al Watany Bank of Egypt, told Al-Monitor.

Koura said that the government should provide Turkish investors in Egypt with more incentives to increase their ventures and expand their businesses. “In any free economy, investors are always welcomed and are encouraged to pursue their businesses regardless of any political disagreements,” Koura added.

Egyptian-Turkish relations deteriorated after former President Mohammed Morsi was ousted in 2013 following mass protests against his rule. Shortly after Morsi’s ouster, Egypt announced that it downgraded its diplomatic ties with Turkey and expelled the Turkish ambassador.

Egyptian and Turkish officials have expressed intention to normalize ties several times since 2016. However, relations between the two countries continue to be tense.