For the first time since it seceded from Sudan in 2011, South Sudan has publicly declared its desire to join the Arab League. 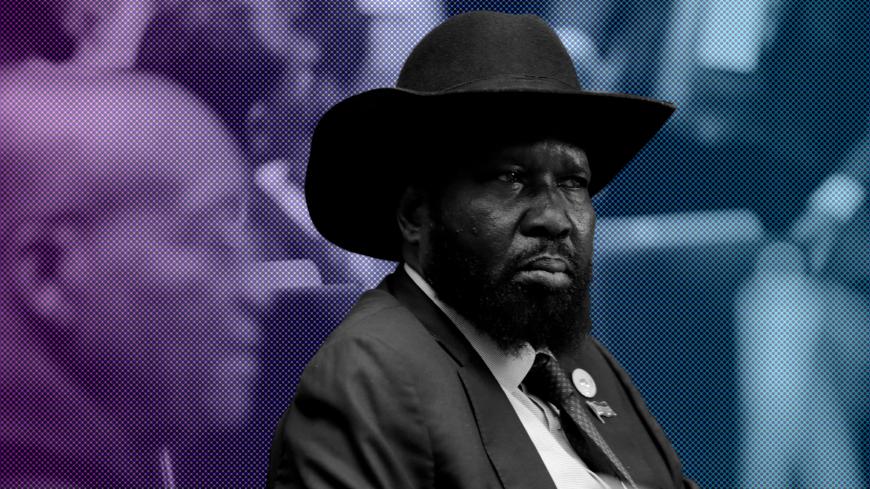 South Sudan's President Salva Kiir Mayardit attends the 30th Ordinary Session of the Assembly of the Heads of State and the Government of the African Union in Addis Ababa, Ethiopia, Jan. 28, 2018. - REUTERS/Tiksa Negeri

CAIRO — Egyptian diplomatic circles are lobbying to galvanize the Arab League to accept South Sudan as a permanent member of the organization.

This comes after a change of heart in Juba, the capital of South Sudan, which had rejected any association with the 22-member Arab league for seven years, since it seceded from Sudan in 2011.

“There have been diplomatic moves led by Egypt within the Arab League emphasizing the importance of South Sudan joining the organization, given Juba’s strategic geographical position, which serves as the Arab gateway to Africa,” an informed Arab League diplomat told Al-Monitor on condition of anonymity.

“During the [March 7] ministerial meeting, the matter shifted down a conflictual path between regional powers about Arab countries' different interests in South Sudan,” the source added.

There has been no official answer from the league since Juba first submitted its application in 2016. However, reports circulating in Sudanese media outlets suggest the application has been declined for several reasons, largely because of the African, rather than Arab, sense of belonging among South Sudanese. Also, despite a peace treaty signed in 2015 to end the civil war between Sudan and South Sudan, fighting continues in the bitter conflict.

The same source said, “There was much heated debate during the meeting, especially given Sudanese Foreign Minister Ibrahim Ghandour’s staunch opposition to the south's membership, arguing that South Sudan continues to pose a security threat to his country. Yet it has been finally agreed to discuss the issue in the context of Arab national security, with the heads of countries during the Arab Summit slated for April 15.”

Some ministers oppose South Sudan's membership "based on false pretexts, such as the claim that the Arabic language is not stipulated as the official language in the constitution of South Sudan, which is not true."

"South Sudanese speak Arabic, which connects all tribesmen, and it's called ‘Juba Arabic.’ What’s more, the constitution recognizes local languages, not only the English language. Any concerns about the south are manageable and can be dealt with in such a way as to serve Arab interests,” the source asserted.

Juba’s tense relations with its African neighbors and the continued deterioration of the political and humanitarian situation seven years after the secession, as well as a lack of any agreement with the rebels, were enough reasons for the south to appeal to Arabs, especially on the level of Arab investments.

There is a permanent Arab League delegation in Juba that has been active since 2007, trying to contribute to the development and reconstruction of South Sudan.

“The delegation’s role is feeble compared to the African Union and UN mission in Juba, as it is poorly funded. In 2012, there were attempts to close the delegation’s office but Egypt thwarted them,” an Arab League official told Al-Monitor on condition of anonymity.

Another diplomat affiliated with the Egyptian Foreign Ministry who refused to be named told Al-Monitor: “Egypt is fighting a diplomatic battle for the benefit of South Sudan’s membership in the Arab League. Since the secession of South Sudan, Egypt has been dealing with the nascent state as a strategic ally to Cairo, which has been evidenced in several Egyptian positions supporting the south in international forums. Egypt foiled UN Security Council attempts to impose sanctions and an arms embargo on South Sudan in December 2016.”

The source added, “[Egypt’s] foreign relations are now calculated based on interests, political and economic support that Cairo could offer Juba through the Arab gateway, which could serve Egypt’s interests in Juba, mainly with regard to the Nile waters."

The land of the south falls under a 1959 agreement covering projects for the utilization of lost waters of the Nile Basin in the swamps of Bahr al-Jabal, Bahr al-Zeraf, Bahr al-Ghazal and the Sobat River.

Disputes and civil wars brought the Jonglei Canal project of 1983 to a halt. Cairo had pinned its hopes on the unfinished canal to secure 4.7 billion cubic meters of water as an initial stage for the irrigation of its agricultural lands.

Hani Raslan, an expert on African affairs and head of the Nile Basin Studies Department at Al-Ahram Center for Political and Strategic Studies, told Al-Monitor, “South Sudan joining the Arab League would be a great gain. After the secession, the nascent state could have been a launch pad for anti-Arab countries, mainly Israel."

Claims that South Sudan identifies more with Africa than the Arab world most likely arose from South Sudan's rivalry with some Arabs — mainly in Sudan — "rather than in terms of a sense of belonging" to one over the other, he added.

Meanwhile, Hilmi Sha’arawi, an expert on African affairs and founder of the Arab and African Research Center, told Al-Monitor, “Juba’s accession to the Arab League does not necessarily mean a guarantee of stability. In fact, the league in its current structure is toothless. It has done nothing with regard to the crises in Somalia, Djibouti and the Comoros. Achieving Arab interests in Juba requires Arab development work.”

On a related note, the Arab League Summit set for April 15 is being relocated from Riyadh to Dhahran, on Saudi Arabia's eastern coast. Riyadh gave no reason for the shift, but various Russian state-owned media implied the relocation is because of security concerns. Riyadh said numerous missiles fired from Yemen targeted Saudi Arabia earlier in the week, including three aimed at Riyadh.