Congress threatens to cut UN funding for voting against Israel

President Donald Trump and Congress are on the same page with a new law that would cut US funding for UN agencies deemed insufficiently supportive of Israel. 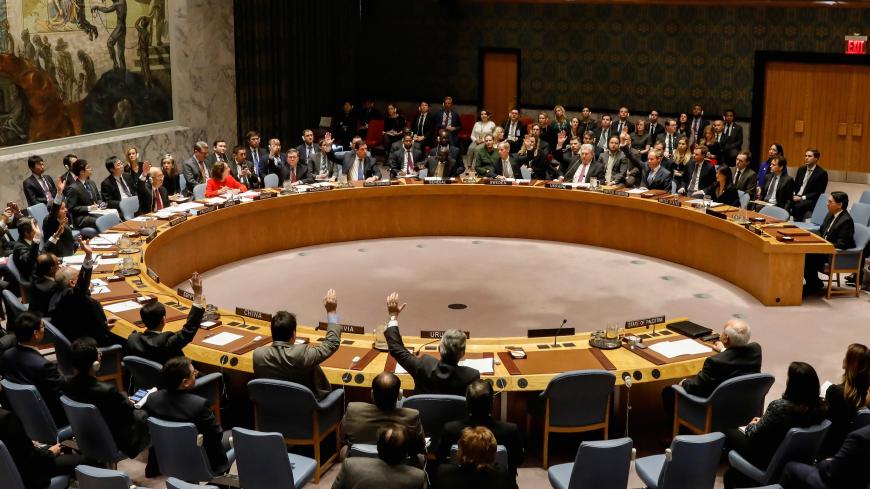 Members of the UN Security Council vote on an Egyptian-drafted resolution regarding recent decisions concerning the status of Jerusalem, during a meeting on the situation in the Middle East, including Palestine, at UN headquarters in New York City, New York, Dec. 18, 2017. - REUTERS/Brendan McDermid

United Nations agencies that single out Israel may soon be on the hook to lose a certain portion of US funding.

According to a little-noticed provision in the massive government spending bill that President Donald Trump signed into law last week, UN agencies and entities that act against the United States or its allies, including Israel, could lose 5% of their US contribution.

The new law requires the secretary of state to consult with the US ambassador to the UN to determine if an “agency or entity has taken an official action that is against the national security interest of the United States or an ally of the United States, including Israel.” Israel is the only US ally that is explicitly named in both the bill’s text and its accompanying report language.

In an effort to sway UN policy, the law stipulates that the UN agency must take steps to change the policy in question before receiving the withheld funds. Otherwise, the funds are subject to reprogramming for other international organizations.

Josh Reubner, the policy director for the US Campaign for Palestinian Rights, a coalition of groups supporting Palestinian statehood, denounced the new law as “yet another example of how the United States bends over backward to shield Israel from valid criticism at the UN.”

“It also shows how the Republican-led Congress is closely coordinating with the Trump administration to make good on its threat to punish the UN for criticizing Israel’s separate-and-unequal policies toward Palestinians,” added Reubner.

But US lawmakers and successive US administrations have long held that the UN singles Israel out for unfairly harsh treatment relative to other countries. Nonetheless, the Trump administration is considering options to make the UN more favorable to Israel.

Foreign Policy reported earlier this month that US Ambassador to the UN Nikki Haley is considering a proposal to cut US foreign assistance for aid-dependent countries that vote against the United States at the UN.

“When we make generous contributions to the UN, we also have a legitimate expectation that our goodwill is recognized and respected,” Haley said following the UN General Assembly’s December vote in favor of a nonbinding resolution condemning Trump’s decision to recognize Jerusalem as the capital. “When a nation is singled out for attack in this organization, that nation is disrespected.”

“This isn’t like it used to be, where they could vote against you and then you pay them hundreds of millions of dollars and nobody knows what they’re doing,” Trump said at the time.

And in January, the administration withheld $65 million for the United Nations Relief and Works Agency for Palestinian refugees — more than half the US contribution to the agency’s annual budget.

“It fits in with what people like Haley have been saying,” Lara Friedman, the president of the Foundation for Middle East Peace, a nonprofit opposed to Israeli settlements in the West Bank, told Al-Monitor. “This doesn’t come out of nowhere. People who see this as a positive thing will see this as one more tool in the president’s arsenal to use.”

And while the legislation aligns with the Trump administration’s stated goal of conditioning US assistance dollars on support for US policy vis a vis Israel, the Senate introduced the original language in September of last year in its annual foreign assistance spending bill.

Notably, however, the original legislation took a much harder line as it did not include the final bill’s national security waiver that allows the State Department to exempt a UN agency from the requirements of the provision.

Friedman noted that the presence of the waiver indicates some level of congressional concern about the harm US cuts to various UN agencies could have on US interests.

And in addition to cutting UN agencies deemed insufficiently supportive of the United States and Israel, the spending bill also mandates cuts to economic assistance that “directly benefits” the West Bank and Gaza unless the Palestinian Authority ends its practice of paying stipends to assailants responsible for attacks against Israeli and US citizens as well as the attackers’ families.

However, the recent legislative setbacks have not deterred Palestine, which became a UN nonmember observer state in 2012, from seeking greater participation within the body. On Saturday, the Palestinian Authority announced that it has lodged official requests to join eight international treaties, including the Nuclear Nonproliferation Treaty and the UN International Convention Against Apartheid in Sports.

“Treaties are sort of the middle ground,” said Friedman. “At some point, you think, well, what happens when they start joining UN agencies, which they have the right to do. Under US law, we have to defund any UN agency they join, which clearly undermines our interests.”