As Gaza's actual zoos struggle, a group of students have developed an app that creates a virtual version. 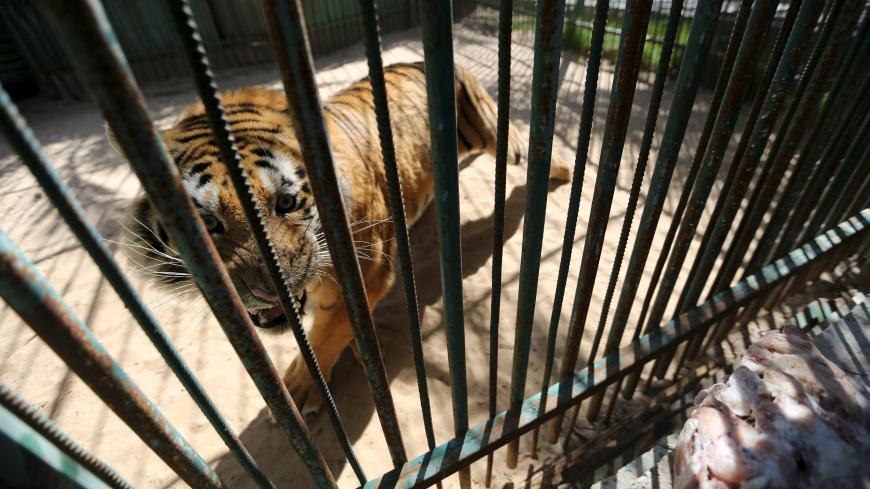 A tiger is seen inside an enclosure at a zoo in Khan Yunis, Gaza Strip, March 7, 2016. - REUTERS/Ibraheem Abu Mustafa

The Gaza Strip has been accused by the media and animal activists of once having the worst zoo in the world. Two years after the last of the living animals were saved and the controversial Khan Yunis zoo closed, Gaza residents will get to see rare animals through a new app called Virtual Zoo.

The Virtual Zoo app, which is available on Android phones and tablets, was developed by students of the faculty of information technology at the University of Palestine. It contains both domestic and wild animals, including ones that Gazans have not seen before, such as African elephants, polar bears and whales. The students used 3-D techniques that enable users to interact with animals in a forest and allow them to pretend to pet the animals, to touch the trees and discover new species.

Ahmed Abu Musameh, a lecturer and the director of the faculty of information technology, supervises the project. He told Al-Monitor, “The Virtual Zoo relies on augmented reality technology through virtual reality glasses. The application — which can be downloaded to cellphones — shows the animals moving around. Users can enjoy watching different species and types of predators, pets and dense forests.”

He added, “The Virtual Zoo app aims to address the lack of zoos in the Gaza Strip and introduce users to animals that cannot be found there. It is free and suitable for all age groups. It gives children a unique educational environment that enables them to learn the names of the animals and discover their native habitats.”

The work has not been easy. He said, “The app [creators] are having trouble obtaining high-definition images of large predators and endangered species to turn them into 3-D figures. Some technical equipment is also unavailable in light of the blockade, but the creators were able to overcome this issue by finding alternative [images from the internet as well as some simple applications] to ensure the success of this technique.”

Abu Musameh said that the university has worked with virtual reality to overcome difficulties imposed by the Israeli siege. Last year, the university launched a virtual museum that brings masterpieces and key monuments to Gazans through an app. “We are living under harsh conditions, but with virtual reality users can experience the beauty of places they have always dreamt of seeing,” he said.

Medhat Haddad, the head of the Inspection Department at the Ministry of Tourism and Antiquities in Gaza, told Al-Monitor, “There are only four zoos left in the Gaza Strip, but none will last if zoo owners remain unable to provide food for the animals. Meanwhile, only a few people still visit these zoos in light of the deteriorating economic conditions. As a result, zoo owners have put their animals up for sale because they can no longer care for them.”

Haddad went on, “The Ministry of Tourism and Antiquities seeks to provide all the necessary aid and support for establishing zoos in Gaza after fulfilling all the ministry’s conditions and specifications, because zoos [have the potential to be] an important source of internal tourism.” He explained that the ministry supports zoos by facilitating access to the necessary permits and alleviating taxes. He added that the ministry shuts down zoos that fail to meet legal standards and mistreat animals.

Haddad continued, “The Virtual Zoo app is a beautiful idea because it enables users to get to know predators and endangered species that they would not find in Gaza. However, an app cannot be considered a substitute for traditional zoos, which are needed not only for entertainment purposes but also for educational and research-related reasons.”

Yamen Noureddine, 10, told Al-Monitor, “The Virtual Zoo helped make my dream come true. I always wanted to see many animals that cannot be found in Gaza such as elephants, crocodiles and wild donkeys. I was able to interact with them, move them around and take pictures with them.”