Why one Gazan turned destroyed home into a zoo

A Palestinian who has been waiting for the reconstruction of his house destroyed in the war on Gaza almost two years ago is now using it as a zoo. 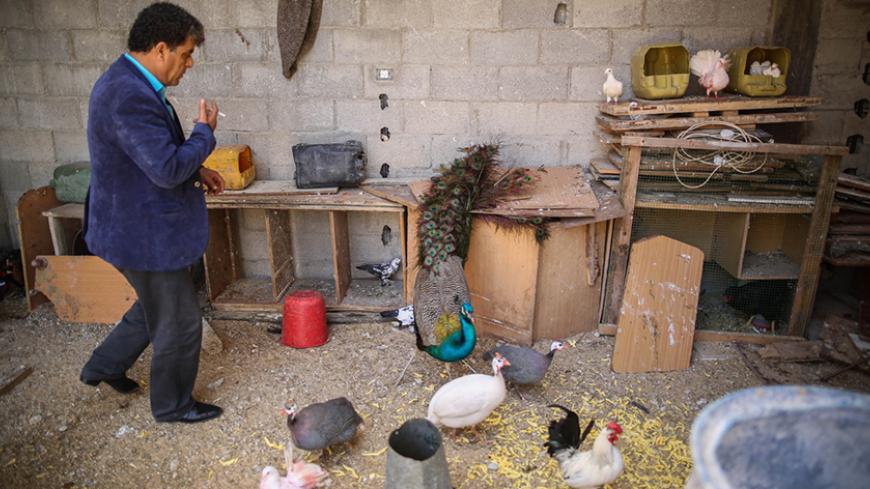 SHAJAIYA, Gaza City — More than one and a half years have passed since the 51-day war on Gaza, which started on July 8, 2014. Since then, about 18,000 homes were destroyed partially or completely and have yet to be rebuilt because of the suspension of the reconstruction process in the Gaza Strip.

Saeed al-Haddad is one of the people who has yet to receive compensation for his destroyed property. The four-story building is dilapidated, uninhabitable and doomed to collapse. However, Haddad wishes to turn it into a zoo, as he has been fond of raising animals since childhood.

According to Haddad, the F-16 fighting jets dropped two missiles on his house on July 14, 2014, in the Shajaiya neighborhood east of the city of Gaza. The neighborhood was almost totally destroyed by the tanks, bombs and military aircraft shells.

“We received a phone call around 11 in the morning warning us to evacuate the house immediately as it was about to be bombed. At first we did not believe it; we thought it was an attempt to scare us. However, when we received the second call, I ran out of the house with my children and by the time we got to the corner of the street, we heard the blast,” Haddad told Al-Monitor.

Haddad, his wife and eight children, including his eldest son and his family, are now living in two back rooms annexed to the house in very dire conditions. His son Baraa, 16, told Al-Monitor, “We are living in a tragic situation. Everything is on hold. We are waiting for either receiving compensation for our house or having it reconstructed. But nothing has happened yet. We have only these animals.”

Peacocks, guinea fowls, ducks and monkeys gather together in the rubble of the house, creating a surreal sight that is not familiar in Gaza.

Haddad looked concerned for a little while as he was examining the smallest of its animals, a baby falcon. “I saved an amount of money to buy these animals. I trade in birds, but it is also my hobby. I paid $500 for an ostrich, but it was very ferocious and I had to get rid of it,” he said.

Families come to the nearby sidewalk to watch the animals. They laugh as it is a funny scene in Gaza. Passersby are curious about the types of birds that seem to be hurting each other and say they should not be placed in one common area. “It is a free sight, and as long as people are happy, I am,” Haddad said.

There are only four zoos in Gaza, but they are not large and do not include a variety of animal species. “If I had the means, I would have separated animals and placed them in different cages. Only the monkeys are placed in separate cages. I could have provided them with more care but this exceeds my means, and I can only get them fodder,” Haddad said.

He also added that he started his zoo by buying some birds six months ago. He also purchased monkeys, which have been in the garden for less than 21 days. He is also thinking of getting a small tiger, placing it in a special cage. “I will also search for a new ostrich, as everyone seems to like the ostrich. However, this time I will make sure it is less ferocious and friendlier,” he said.

Children living nearby have expressed how happy they are with the zoo. One thing, however, seems to be bothering them. Muhammad Mtiz, 13, told Al-Monitor, “The sound of peacocks at night is terrifying. It is like shrieking.” His cousin Ahmad laughed and said, “It might be a little bit scary, but better than the sound of shelling.”

Saeed’s wife, Umm Ramadan al-Haddad, does not seem to welcome the animals and was not able to show some support for her husband. “I hate these animals. They consume our money and cause the spread of mosquitos and insects. This is not to mention that school children gather every day at 6 in the morning to feed the monkey, and we wake up to their voices,” she said.

Her husband replied to her, “This garden is a way of expressing our objection to the delay in construction and to attract attention to our tragedy. I want to send a message that my house might not be fit for us to live in but it is for the animals.”

Haddad said that if construction tools and material were available at lower prices, he would be satisfied to rebuild his house by himself. However, this is impossible in light of the dire conditions and the closing of crossings. He blamed this on officials, Europe and the entire international community for keeping Gaza at the bottom of the list.

Haddad and his wife do not know what the future has in store for them. They hold their grandson with love in the remains of their house, surrounded with their belongings and the rubble. Perhaps the house is no longer fit to accommodate everyone, but for Haddad, there will always be room for new animals.