US pressure on Hamas risks new era of enmity

As Washington moves forward on sanctions to pressure Hamas to accept a US-brokered deal with Israel, the efforts could backfire and spark new violence. 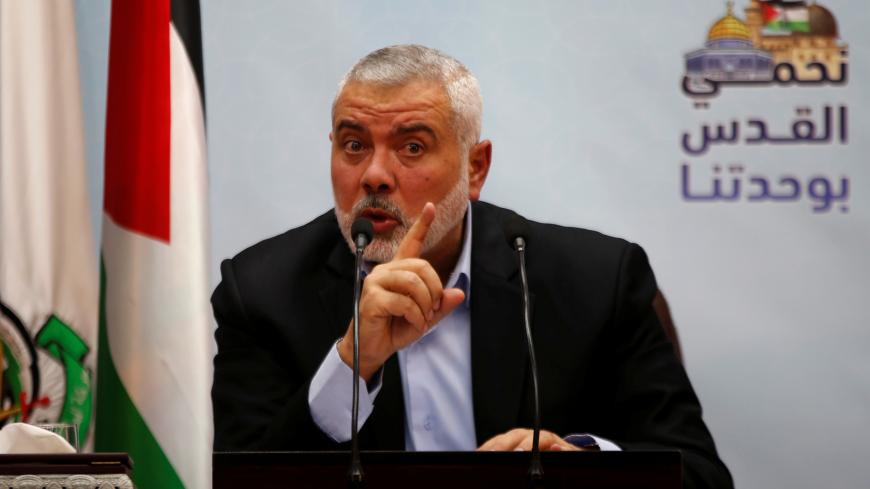 The US House of Representatives passed a bill to impose sanctions on Hamas Feb. 15. Devised by the House Committee on Foreign Affairs, the bill deems Hamas' use of human shields in fighting with Israel an act of terrorism and a violation of human rights. Meanwhile, US President Donald Trump is calling on the US delegation to the United Nations to work on a resolution to impose international sanctions on Hamas.

The House bill needs to be submitted for a vote in the Senate, then signed by the president before it becomes law.

Hamas responded in a statement condemning the bill as promotion of Israeli propaganda, saying it could be used to justify more violations against Palestinians.

Osama Abu Rashid, a US-based Palestinian researcher at Doha’s Arab Center for Research and Policy Studies, told Al-Monitor in a phone call, “There are no signs pointing toward a straightforward American escalation against Hamas.”

He added, “But Washington sees Hamas’ rule over the Gaza Strip as impeding the establishment of the Palestinian state as the US envisioned it in the so-called deal of the century. The United States might believe that applying pressure on Hamas will prompt it to agree to the deal, considering the overwhelming crisis Hamas is dealing with in Gaza. However, Hamas’ military power might still obstruct the deal.”

Hamas has been caught in a financial crisis since mid-2017, halving the salaries of thousands of the employees working in the movement’s political and military institutions. The movement was forced to reduce its operational expenses and its budget by about 50%. Hamas fears Washington might further limit its financial resources by pressuring countries with ties to Hamas, like Qatar and Turkey.

The US campaign against Hamas goes further. The White House issued a statement Feb. 9 holding Hamas responsible for Gaza’s humanitarian crisis. It accused the movement of exploiting the people of Gaza and treating them as shields and hostages in times of war. Spokeswoman for the US State Department, Heather Nauert, said at the daily State Department press conference Feb. 7 that Hamas has prevented the implementation of major electricity and water projects.

On Jan. 31, the State Department designated Ismail Haniyeh, head of Hamas’ political bureau, as a terrorist for his links with Hamas’ military wing, Izz ad-Din al-Qassam Brigades, and supporting armed action against civilians.

Hamas denied these accusations in a Feb. 18 statement, describing them as a green light for Israel to continue its aggression against the Palestinian people. Hamas also described the Trump administration as a foe of the Palestinians.

Hamas spokesman Hazem Qassem told Al-Monitor that the recent US moves are not new, saying, “This bill is part of a US campaign against Hamas to justify the occupation’s crimes and an attempt to strip the Palestinian resistance of its legitimacy. The current US administration wants to focus pressure on Hamas, as it is the strongest entity supporting the Palestinian cause.”

Hamas can be expected to turn to friendly countries like Turkey, Qatar and Iran for support. Hamas fears the US sanctions might pave the way for Israel to launch ground operations against it or intensify the siege on Gaza under an American cover.

Oddly, the Palestinian People’s Party is the only Palestinian group to have expressed disapproval over the US bill. A Feb. 15 statement by the party said the US decision came in harmony with the Israeli position against Palestine as Israel seeks to gradually build a vicious offensive against the Gaza Strip.

In his speech last May from Riyadh, Trump had accused Hamas of carrying out brutal actions and killing innocent people just like Hezbollah, the Islamic State and al-Qaeda.

Hamas is likely to contact parties close to the US administration for help. But Ghazi Hamad, the deputy foreign minister in Gaza, told Al-Monitor, “Since the present US administration was inaugurated in early 2017, Hamas has been trying to establish a line of communication, but to no avail, thanks to the administration’s adversarial stance against the group since Trump’s address in Riyadh last May.”

Hamad added, “This policy could fuel tensions in the region. We had contacted nongovernmental US sides, who shall remain nameless, in the last few weeks, and they expressed disagreement with the current US administration’s positions, feeling that Hamas, being a core component of the Palestinian people, shouldn’t be antagonized despite the political differences. However, we don’t know the extent to which these sides can make a change regarding the administration’s positions on Hamas.”

Trump-appointed Middle East special envoy Jason Greenblatt might be the US official with the most hard-line position against Hamas. Greenblatt never misses an opportunity to take a shot at Hamas, the most recent of which was a tweet on Feb. 19, in which he accused the group of being responsible for “cowardly acts [that] will only escalate violence.”

On Jan. 28, Greenblatt accused Hamas of using its funds to build tunnels and stockpile rockets instead of helping the citizens of the Gaza Strip, adding that Hamas spews hateful rhetoric and foments violence.

Hosam al-Dajani, a political analyst in Gaza, told Al-Monitor, “This bill against Hamas is part of Washington’s stick-and-carrot approach toward Hamas, in that the US sanctions will be lifted should Hamas comply with the ‘deal of the century.’ Otherwise, Hamas should be ready to face a vicious Israeli war, as these US sanctions could be a preface for Israeli military action. Washington might even take part in this military action against Hamas, or at least enforce US restrictions, such as pressuring the states that fund or support the group.”

A new era of Hamas-Washington relations is approaching, one that will feature more tensions and mutual accusations that might force Hamas to add the United States to its list of foes next to Israel, even if the group didn’t publicly declare so. While Hamas has always been committed to release aggressive statements and oppose US policies, it has not yet translated into actual moves against Washington. But Hamas believes that the US attitude toward it might top any move former successive US administrations have made against the Palestinian group.