With the interrogation of another local US Consulate employee, Turkey appears to have broken its promise not to hound staff without notifying the American authorities in a move that could trigger targeted visa sanctions against Turkish officials deemed to be involved. 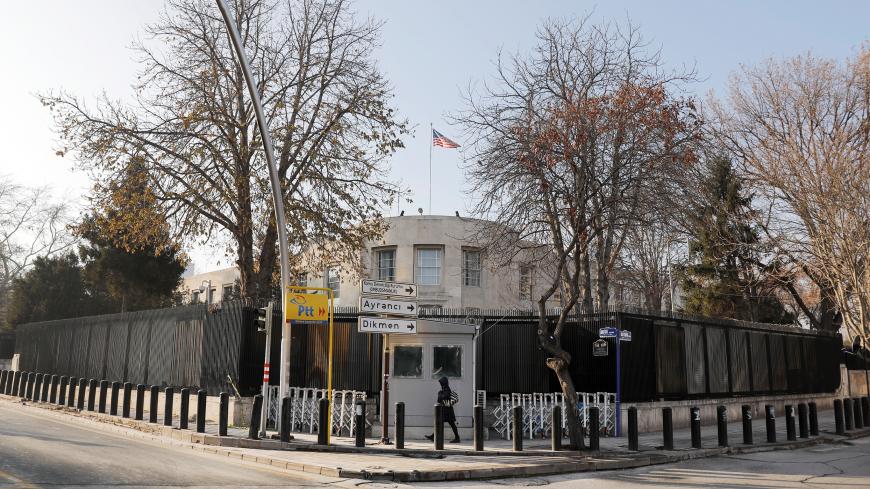 Turkey has reneged on its pledge to not hound locally employed staff at US missions on its soil, with police interrogating a Turkish citizen working for the US Consulate in Istanbul yesterday, Al-Monitor has learned. The move could likely accelerate the US administration's plans to apply targeted visa sanctions against Turkish officials deemed to be involved in the unlawful detentions of US Consulate staff, provided that Secretary of State Rex Tillerson gives final approval, sources close to the Donald Trump administration told Al-Monitor.

The sources, who spoke on strict condition of anonymity due to the sensitive nature of the topic, said the local staff member was issued a police summons around three weeks ago. Yesterday, he presented himself to police with his lawyer at hand. He was interrogated for four hours. The employee was not formally charged with anything but was asked to remain in his house until further notice. One of the sources described his situation as “effective house arrest.” He did not come into work today.

The man is the same one who was being sought for interrogation when fellow local employee Metin Topuz was detained then arrested last October on charges of being linked to the July 2016 coup attempt.

When police were unable to locate the man, who was identified earlier by the Turkish media by his initials N.M.C., they raided his home and detained his wife and daughter.

Coming on top of last February’s arrest of Hamza Ulucay, a local employee at the US Consulate in Adana, over his alleged links to Kurdish separatists, the move triggered a crisis in already flagging US-Turkish ties.

The US Embassy in Ankara announced that it was halting visa services for Turkish citizens at all its missions in Turkey. Turkey retaliated with a blanket ban of its own.

Then, in an apparent U-turn, the embassy declared that it was resuming full visa services in December after receiving assurances that its locally employed staff members would not be arrested for performing routine duties such as communicating with Turkish officials. Ankara had pledged to inform Washington in advance of any intention to detain other staff members in the future.

With N.M.C. under de facto house arrest, the question of whether the United States will follow through with targeted sanctions against Turkish officials if Topuz and Ulucay are not released — or if the Turkish government fails to provide evidence of any criminal act committed by either man — has become ever more pressing, the sources said.

Even before N.M.C.'s tangle with the police, the United States had given Turkish authorities a deadline for tangible progress in the resolution of Topuz and Ulucay’s cases, the sources claimed. US officials did not respond to Al-Monitor’s request for comment on this claim.

It remains unclear why Turkish authorities are pursuing the man but the sources speculated that it may be over his routine contacts with now purged Turkish officials with alleged links to Fethullah Gulen, the US based Muslim cleric who is accused of plotting the failed coup.

Jonathan Cohen, the US deputy assistant secretary of state who covers Turkey, led a delegation of US officials including members of the Department of Justice for meetings with Turkish diplomats and other officials on Jan. 23 to press for the release of the staff members, among others. But they reportedly came back empty handed. “The meetings were very difficult,” one of the sources maintained. It didn’t help that their trip came three days after Turkey launched a full-scale military offensive against the US-led coalition’s Syrian Kurdish allies in Afrin.

The sources said the Trump administration had drawn up a list of Turkish officials thought to be linked to the employees’ arrests, and they will be denied visas to the United States. The trouble, one of the sources noted, was that the targeted officials might get around the ban by applying for a special visa that is issued to members of foreign delegations that travel to the United States for temporary business. In any case, it remains unclear whether Tillerson is prepared to further escalate tensions at a time when the administration is re-evaluating its ties to Turkey.

Turkey’s incursion against the Syrian Kurdish People’s Protection Units (YPG) in Afrin has sharpened debate within the administration over the merits of its Syria policy. The Pentagon’s continued partnership with the YPG, which is closely linked to Kurdish rebels waging a bloody insurgency inside Turkey, has pushed Turkish-American relations over a cliff and Ankara into Moscow’s arms.

Calls for the Pentagon to wind down its alliance with the Syrian Kurds are growing ever louder, especially inside the State Department’s Bureau of European and Eurasian Affairs, the sources said. Amid all the flip-flopping, Turkish braggadocio is winning the day.