US, Turkey could be on collision course in Syria

Neither side is backing down as Ankara and Washington exchange tough talk over potential confrontations in Syria. 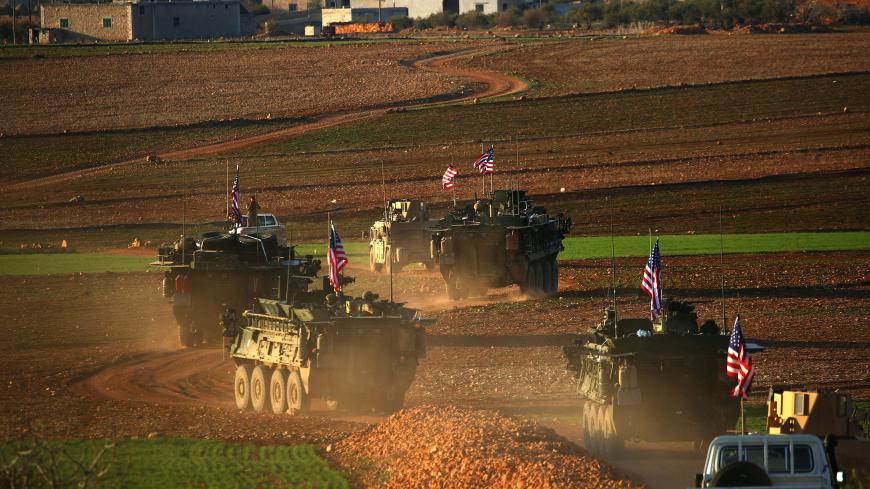 A convoy of US forces’ armored vehicles drives near the village of Yalanli, Syria, March 5, 2017. - DELIL SOULEIMAN/AFP/Getty Images

As the situation in Syria heats up among all players — including Israel — Turkey and the United States so far have limited their exchanges to a war of words. However, signs aren't encouraging that it will end there.

Decision-makers in Ankara have toughened their rhetoric against the United States, and many senior figures in the ruling Justice and Development Party (AKP) are hinting at the possibility of armed confrontation between Turkish and US soldiers.

“If US soldiers wear the garb of terrorists and hang around with them, and if they attack Turkish soldiers, no doubt we will not have a chance to distinguish between them,” Deputy Prime Minister Bekir Bozdag said last week.

In a Feb. 6 speech before AKP parliamentarians, President Recep Tayyip Erdogan said, speaking to the United States, “Get out of Manbij. We will come there to deliver the land to its true owners."

Turkey started its assault on Afrin in January to drive out the Kurds, specifically the People’s Protection Units (YPG). Ankara appears insistent on expanding the Afrin offensive to Manbij, about 60 miles east, after gaining full control of the area west of the Euphrates River.

The United States, for its part, sounds determined not to abandon Manbij, even though it has no permanent military outposts there. As Ankara hardened its stance, a coalition team including Lt. Gen. Paul Funk and Maj. Gen. James Jarrard visited Manbij on Feb. 7 and had plenty to say.

“We’re very proud of our positions here, and we want to make sure everybody knows it,” said Jarrard, the special operations commander for the US-led coalition against the Islamic State (IS) in Iraq and Syria.

“You hit us, we will respond aggressively. We will defend ourselves,” Funk added, raising the stakes.

An armed confrontation Feb. 7 between US-backed Syrian Democratic Forces and President Bashar al-Assad's forces — backed by Russia — escalated to a major battle in Deir ez-Zor, an oil-rich town in eastern Syria. War planes were involved — yet another sign the United States intends to hold on to the territory it has brought under its control in the post-IS setting.

Is an armed confrontation in Manbij between Turkish and US soldiers really a possibility? The key consideration here is whether Turkey is genuinely willing to challenge the United States militarily in Syria. Or is Ankara’s increasingly aggressive rhetoric just part of its effort to deter the US military from working more closely with the YPG in Manbij?

The situation on the ground now seems very similar to the one that led to the notorious “hood incident” in July 2003, which ended with US forces based in Kirkuk, Iraq, capturing Turkish special forces personnel operating in Sulaimaniyah in Iraq's Kurdish region.

The 2003 incident began when an unmarked building in Sulaimaniyah used by Turkish special forces operating secretly in Iraqi Kurdistan was raided by American soldiers on the pretext of stopping an alleged assassination plot against the Kurdish governor of Kirkuk. Turkish special forces were detained with hoods over their heads and were questioned for days at a Kirkuk air base. During the interrogation, Patriotic Union of Kurdistan militants misled the American soldiers and provided false translations, thus stalling the Turkish soldiers' release for days. The resulting crisis of confidence became a major trauma that still has a place in Turkey’s strategic culture.

As a former special forces officer, I was assigned as a liaison team commander of Turkish special forces with the US 173rd Airborne between November 2003 and May 2004. Today I shudder, sensing the same operational environment at Manbij.

Exactly as in the April-July 2003 period, Turkish and American soldiers are moving all over Manbij in the same operational environment without coordination, practically as hostile forces on the ground, again guided by local forces and translators. In a Jan. 25 Al-Monitor article, I had described Turkey’s Afrin offensive as an “effect-based operation” that targets US cooperation with the YPG forces east and west of the Euphrates River.

This is why Ankara will keep pressure on the United States as much as it can over Manbij. How long will US decision-makers resist this pressure? I think we will get some indicators of the US response with the visits to Ankara of US national security adviser H.R. McMaster last week and by Secretary of State Rex Tillerson this week. From developments, I sense the United States is trying to stall a showdown by using a good cop/bad cop tactic. But it's also obvious that strategy doesn’t work with Ankara.

At the end of the day, special forces that serve in chaotic areas like Manbij have to rely on the guidance of local forces and translators. As happened during the hood incident, if the local guides and translators want to ignite a conflict, they can easily do it — which is the dynamic that frightens me now. The blood feud between the Free Syrian Army (FSA) elements that provide guidance to Turkish troops and the Kurdish YPG elements that do the same for the Americans are well-known. Because of that all-consuming feud, even if Turkish and American soldiers try to avoid direct contact, they can be manipulated well by a process of which they are not even conscious.

The harassment-fire exchanges between the FSA and YPG at Manbij could get out of control and escalate to a major clash that will reduce the distance between Turkish and American soldiers and put them in range of direct fire from tanks and anti-aircraft guns, and indirect fire of artillery, mortar and rockets. The best method to minimize these hot contacts would be to deploy US liaison teams with Turkish troops and to set up a joint operations center to coordinate their moves. Such a mechanism doesn’t exist today, but I hope one would be set up before we experience another traumatic event like the 2003 hood incident. We all hope a decision is made soon to set up this mechanism. If that can’t be done, I would suggest getting ready for another hood incident.

But this time, those captured and hooded may not be Turkish.