US maintains mystery about long-term intentions in Syria

Remember that "border force" the US said it was, and then wasn't, forming in Syria? Apparently, it's already there. 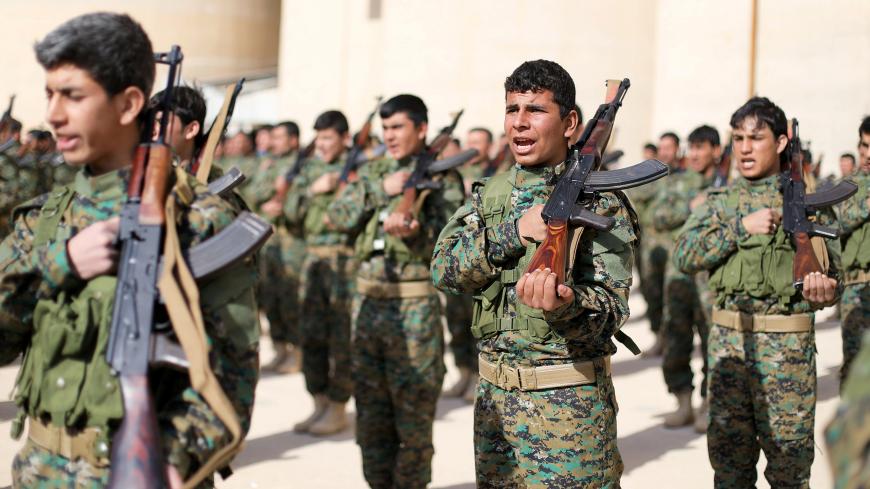 Fighters from a new border security force under the command of Syrian Democratic Forces (SDF) hold their weapons during a graduation ceremony in Hasakah, northeastern Syria, Jan. 20, 2018. - REUTERS/Rodi Said

DIYARBAKIR, Turkey — “What is the United States doing in Syria?” This is the question Turks have been asking since American soldiers showed up in Syria's civil war. This still-unanswered question has caused unprecedented deterioration in the US-Turkey connection. Tension in the already-strained relations reached a peak when the United States announced Jan. 14 that it was setting up a 30,000-strong border army in northern Syria — just as Turkey was about to launch its offensive on Syria's Afrin province.

The United States subsequently tried to soften its announcement, but that didn't calm the reactions. Naturally, the strongest reaction came from Turkey, which called the proposed force a new “army of terror.”

What is this "new army"?

According to wide-ranging research by Al-Monitor, this army exists — and it doesn’t. It exists because the United States — by arming the Syrian Democratic Forces (SDF), its ally against the Islamic State (IS) — had already created an armed force on the ground. But it doesn’t exist because, as notable locals insist, this is not a new army.

Kurds say they realized they needed a military system in the post-IS period and decided to set up a force. Officials of the SDF, a Kurd-Arab alliance, told Al-Monitor this force became perceived as an army. Training has begun at 14 training camps set up in Kurdish-dominated areas. There is a new officer-training school and a military college. An SDF official who didn’t want to be identified said the project is financed by the Kurdish cantonal administration and its goal is to reach 30,000 members.

“It's not a 'new army,' as some say," the same source told Al-Monitor. "To set up an army would mean splitting off from Syria. Creating a state is not part of our thinking. We already have a military force and we want to develop that [and] make it professional. Whether the United States supports this project or not, it is an essential need. We have to do it."

What do analysts say about the 'new army' label? According to Syrian political analyst Mahir Afrini, the label is a propaganda scheme. Afrini told Al-Monitor, “Before that announcement, the SDF was already receiving American assistance, and that continues. Training continues at full pace. This very much sounds like propaganda to me.”

Afrini said the United States intentionally avoids a transparent strategy in the region. “Some allege that the US military and its State Department are speaking from different pages, but if you ask me, this is intentional. In Syria and [the area], everybody is each other's enemy. Every state has some interests. But the United States as a superpower pursues its own strategy to manage the affair."

For example, he said, the United States hopes to avoid new conflicts there and wants Turkey to find some common ground with the PYD — the US-supported Kurdish nationalist Democratic Union Party, which is affiliated with the SDF and which Turkey considers a terrorist group.

"We don't know what the United States' final goal is," Afrini said. "Does it want to create a smaller Syria? What does it want from Kurds, from Shias?"

He said the United States has invested too much in the region to leave anytime soon. "I don’t know how long [its stay] will be, but it will be long. These are not projects that can be wrapped up in a couple of years."

Al-Monitor also spoke with Serbest Nebi, a well-known name in political science in Syria who at the moment is an assistant professor at Koya University in Iraqi Kurdistan. Nebi, who has lectured in universities in Turkey and Yemen, agreed that such an army was already formed. The United States is looking for an alternative to Turkey as an ally.

He said, “If Kurds gain stature in the region, Turks want it to be under their control. But Erdogan and his then-prime minister, [Ahmet] Davutoglu, both pursued this, and after seven years of war and violence in Syria, Turks realized their aspirations were out of reach. Turkey became the country that gained the minimum in the region and Erdogan became the least-reputable leader in the world. The United States wanted to spoil Turkey’s plans. Turkey under AKP [Erdogan's Justice and Development Party] rule couldn’t become a European Union country. Its relations with Europe haven’t improved. Now you are hearing calls for Turkey's expulsion from NATO.”

Turkey's relations with the EU aren't likely to improve, Nebi said. "This is why the Americans are searching for an alternative [ally], which could be northern Syria [Western Kurdistan, also known as Rojava]. Such a region would provide a robust and powerful base for the United States, Israel and Europe to stand against Russia. That army [the Kurdish force in Syria] is already established. Trained units have already taken their places in the field. The issue is done with. The US narrative and attitudes clash daily with Turkey. No matter how angry Turkey may be, the United States will not leave. It will not sacrifice its interests in northern Syria for Turkey’s sake," especially not before a regime is established in Syria.

"Nobody should have illusions. The United States has been investing here for years," Nebi added. “If I were an American decision-maker, I wouldn’t leave."

However, Turkey doesn't need to fear the American-backed Kurdish forces. "We [Kurds] have never threatened Turkey or attacked it. Erdogan suffers from Kurdophobia. It is out of the question for us to tamper with Turkey’s borders. If we wanted to, we could have spilled the struggle into Turkey, but we are not doing it. We have other cards that could be problems for Turkey, but we are not using them. We can be two good neighbors,” Nebi said.

The Afrin offensive is leading in the opposite direction. Kurds in both Syria and Turkey are unhappy. Even the Kurds who had voted for Erdogan’s AKP are reacting negatively to the Afrin operation and the loss of lives.

Although Turkey tends to raise its voice, America prefers a low-key approach. This doesn’t please either the Kurds or the Turks; only the United States is satisfied with the prevailing uncertainty. Meanwhile, without transparency, Turks will continue to ask, "What is the United States doing in Syria?"